I started working directly with coach Greg McMillan earlier this year. Something we focused on from day 1 was our strategic approach to my running. What were my long and short term goals? What would be the best way to achieve them? 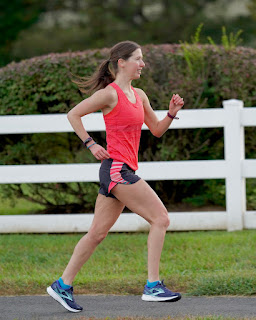 My primary sentiment was this: At the age of 43, I believe that I am at my peak or very close to it. The time so see what I am truly capable of is now. The past year has been rough with the torn adductor, getting sick with Covid, and then having that SI Joint issue right before Boston. Is this a sign that I can no longer train at the intensity of previous cycles? Or is it just bad luck?

I wanted to run both the Indianapolis Monumental Marathon and the Houston Marathon (10 weeks apart) so I would have two shots at a fast race in the near future. And then I would focus on the half marathon in the spring of 2023.

Strategic Planning
Coach Greg heard me and came up with a plan. Since summertime running is very hard on my body and I have a tendency to get sick if I push too hard in the heat, he thought that "getting through the summer" would be the best approach. So over the summer, instead of running my typical off-season mileage of 50-55, I was averaging about 40 miles per week.

I was nervous that such a low training load wouldn't set me up for success in a fall marathon, but when I set a course PR at my annual Firecracker 5K, I realized that this approach was working for me. Even better, I had more energy than I typically have in the summer, and most of my runs felt strong.

Then marathon training started. The training load increased, but it was still notably lower than what I had done for past cycles. Coach Greg's rationale was that after everything I had been through in over the past year, he wanted to get me to the start line of Indianapolis healthy. Indianapolis would be a "stepping stone" race for Houston and future marathons to see how much load I could safely handle.

The theory was that I didn't need a huge fitness bump to set a marathon PR. I've actually been in shape to run faster than my my 3:15 PR for several marathons: CIM, Harrisburg, and Two Rivers. But each of those races had circumstances that prevented me from performing to my full potential come race day. In each of those training cycles, I had set PRs at other distances - just not the marathon. So all I really needed to set a marathon PR in Indianapolis was to re-build endurance, get to the start line healthy, and have favorable weather conditions. 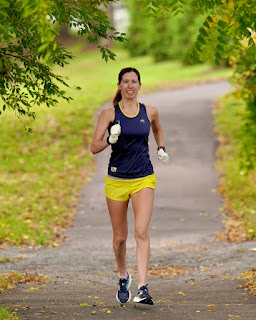 As the race approached and we were greeted with unseasonably cool temperatures throughout the first half of October, I cranked out some really impressed workouts. Notably, 18 miles with 12 at marathon pace of 7:15 average. And that run didn't even take too much out of me. I recovered very quickly from it.

So. . .  everything "worked" as planned!  With less mileage and fewer workouts, I was fit enough to run a marathon PR. I was not injured or sick, and I felt fresh on my final workouts.

Weather Woes
One week out from the race, the forecast was looking to be on the warm side. Starting in the low 50s and finishing in the low 60s. Moderately humid. This would be similar to the race weather I had at CIM in 2019. I knew a PR wouldn't be possible for me because I am hyper-sensitive to humidity, but I figured I would still run it with an adjusted goal. I would try to run faster than my CIM time and set a "humid PR". But every day the forecast got warmer and warmer until the starting temperature reached 60. At that point, I started to wonder: What would I be getting out of this race? Would would my purpose be?

My purpose for running this race was for it to be my "stepping stone" that would kick off future training cycles. To build my confidence that I can run a strong marathon and not be recovering from an injury or illness. Could I still get that in warm and humid conditions? Probably not, considering the recovery time would be extended. Knowing my body and how it responds to humidity - I don't think it would be wise or responsible to put myself through that kind of stress. My risk of illness would skyrocket and then I wouldn't be able to bounce back and train for Houston.

What about husband Greg? Greg is unfortunately still injured with something similar to my Osteitis Pubis/Adductor tear. He has not run in four weeks and therefore was not planning on running Indianapolis either. I am optimistic about him running the Houston marathon or at very least, the half marathon. 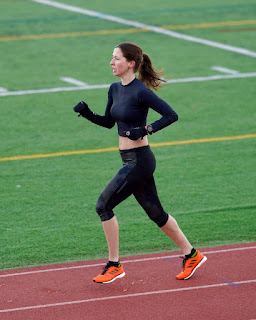 New Game Plan
Coach Greg and I discussed my options and he advised against me running Indianapolis. He agreed that there would be no point in doing it and that it would likely prolong my recovery. This goes against everything that we've been working towards: feeling good and fit when running a marathon. He reiterated that this was a stepping-stone race anyway, and not the main goal.

The former version of myself (before I went through sports psychology, wrote the book, transformed my mentality) would have bailed on the race because it wasn't PR weather. And it's important that I make a distinction in my own mind that this is not what's happening here. It's not about a PR - it's about my health, about feeling strong, and getting back on the right track with marathon running.

Not running Indianapolis saves me over $1200 in travel expenses, plus two vacation days I would have taken off work. The Richmond marathon is next weekend which is a relatively short drive, and just one night in an inexpensive hotel. So at the moment, I am eyeing that one. Coach Greg advised me to run the half marathon unless the weather was going to be really cool. Now that Houston will be a 9-week turnaround, I don't want to risk a prolonged recovery from warm temperatures. So the plan is:

The possibility of the half marathon excites me. I had a bad day in Hartford a few weeks ago and I'd love to see what kind of half marathon I can run with full marathon training behind me. And that would make me even fresher for the Turkey Trot 5K.
I am surprisingly not upset about any of this. I was definitely frustrated and bummed when the Indianapolis forecast first came out, but I got over it quickly and accepted my new reality! Coach Greg has given me a new perspective on my running and I'm happy to be healthy and to have had such a successful training cycle. If it doesn't end with me finishing a marathon, I'm totally fine with that. I'm looking at the bigger picture and enjoying the journey.
at 5:32 PM