I'm back again with an update, with a little more clarity than I had in my previous update.  I'll first provide a brief overview of the situation, then a detailed timeline (more for my own sake to remember how this progressed) and then I will do a little rant about of navigating the healthcare system. Feel free to skim, as this is admittedly a boring post.

Timeline
After seeing my doctor on Tuesday, March 29, I scheduled an MRI for the following Tuesday (which then I was able to bump up a day to Monday April 4). I wanted to rule out a bulging disc.
March 30-April 3
I had zero change, zero pain relief Wednesday-Saturday, which was discouraging as I had stopped running entirely. My doctor prescribed a prescription for 1000mg a day of Naproxen, but that didn't help at all.
On Friday, I decided to get a second opinion from another doctor who ideally would be able to give me a cortisone shot, as I wasn't getting any relief with rest or with Naproxen or with PT/dry needling. This doctor was not at all helpful, but he did tell me to stop taking the Naproxen and instead start a 6-day round of MethylPREDNISolone. Those are steroids, which I started on Saturday, April 3 and finished today.
During this time I refrained from running and did minimal walking. But I did some light PT exercises for the hips and glutes, along with stretching and foam rolling. I also used my RapidReboot hip attachment for compression therapy. I didn't want to go too crazy with the PT exercises because I hadn't been prescribed any by my PT and I wasn't sure it was an SI Joint issue. I just did some common sense stretching and strengthening that didn't cause pain.
April 4-6
Monday was the first day I noticed some relief. Finally it wasn't painful with each step, so I figured the rest + steroids were working. Monday was also the day of my MRI. I actually somewhat enjoy having MRIs. It requires you to be alone with your thoughts; no distractions. A great mental toughness practice.
On Tuesday, April 5, after taking nine consecutive rest days, I decided to go for a test run. Pain with walking was almost entirely gone by this point. I ran with an SI Joint belt, which had been recommended to me by a few people on Instagram as well as a doctor friend. I don't think the SI Joint Belt helped, but I do like the support it provides while doing my daily activities. On Tuesday's run, I did a run/walk series, with the run portions getting progressively longer (2 mins, 3 mins, 5 mins, 7 mins) to see how things were feeling. Pain around the SI Joint kicked in about 15 minutes into the run. And then it quickly spread to the glute and hip and I ended up stopping at 22 minutes. This was extremely discouraging.
After the run/walk I foam rolled, stretched, used a massage gun, and took an epsom salt bath and things calmed down and were back to normal.
I got the MRI report which I didn't quite understand, but my doctor friend told me it was all clear and that the pain was not disc-related. I have some slightly bulging discs, but they aren't causing me problems. 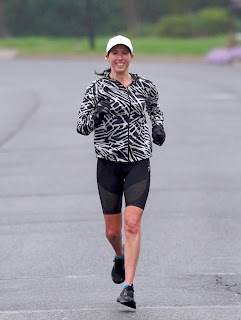 My run the following day, April 6. was SO MUCH better! I ran for 4.4 miles, including a few short walk breaks. No SI Joint pain, but my hip did tighten up on me a few times, and I had to stop and stretch. This could be because I did not wear the SI Joint belt, and my PT told me later that day that I probably didn't need one because my pelvis didn't need additional stability. During our session he did an adjustment to help the hip, and he also performed dry needling on my back, glute, and hip. It was painful.
Later that evening, I had a virtual visit with my favorite medical provider, a sports chiropractor who recently moved across the country. He was my go-to for ten years and I trust his opinion entirely. I probably should have done this virtual visit two weeks ago, but I was skeptical that virtual would help much. In hindsight, I think he would have provided the clarity I needed sooner rather than a lot of the ambiguous answers I had been getting from other providers.
This sports chiropractor has helped me overcome everything that has popped up over the years. Talking to him was very reassuring. I was on the fence about getting a cortisone injection and he was in favor of it. He told me what to expect, gave me some exercises and advised on how to proceed.
Today, April 7, I ran 6.6 miles 100% pain free thanks to the PT session the day before. No hip tightening, no SI Joint pain. I ran it as a progression run because I had a ton of energy and threw in some strides. It felt amazing to be back out there again. I still decided to get the cortisone injection because I didn't want the pain to return, and today would be my last chance before my doctor left town. I learned that there are very few risks with cortisone in the SI joint, and the potential reward was high.
I've had two cortisone injections in the past, but they were both somewhere in the 2007-2008 timeframe and not for my SI Joint. One was the ankle and I think the other was the knee, but it might have been the hip.
My plan is to take a rest day tomorrow to recover from the injection, do a short/easy run on Saturday and then attempt a longish run on Sunday. I'll have to play it by ear and see how everything feels, but that's the plan for right now. My doctor actually cleared me to run tomorrow but in general I feel like she allows me to run when I really shouldn't!
Venting Frustrations
I think I would be much better off if I had a cortisone shot last week; but my doctor didn't have any availability on the schedule until today. I tried to get one at my initial appointment on March 29, but she said that she didn't have time during that appointment. I wish I would have pushed harder to get the shot right then and there instead of waiting 9 more days. Then I wouldn't have had to mess with the medications or the MRI. SI Joint injections are used for diagnostic purposes because if the pain goes away, then it was definitely SI Joint.
Instead, it was a roller coaster of trying different medications, scheduling an MRI and trying to get insurance to approve it (they did not), and not really knowing what the issue was or if I was going to be able to finish Boston. And it took a full week since my initial appointment to get real pain relief.
I've spent so much time on the phone trying to schedule PT sessions, trying to get an earlier cortisone shot (without success), working through the MRI scheduling and insurance, trying two different prescription drugs. Basically feeling helpless, frustrated and uncertain!
It's much easier when you know what your injury is, how long it will take to recover, and clear instructions on how to proceed. (Like a stress fracture, for example). It's also easier when it doesn't pop up three weeks before the Boston Marathon. So while I handled Covid pretty well, and while I handled my groin injury pretty well, I really struggled with the uncertainty on this one. It was difficult to stay positive.
BUT, I think I am finally coming through to the other side and I'm done with the worst of it. I have the cortisone shot, I have two PT sessions set up for next week, I know I'm not dealing with a disc issue, I have guidance on how much to run and what PT exercises to do, I'm no longer taking medications, and I had a 6-mile pain-free run this morning! I had none of this on Monday of this week.
My primary goal is to get to the start line feeling good so I will prioritize that over trying to salvage my fitness. At Boston, my main goal is to finish the race and ideally be able to walk when I am done (or at the very least, to be able to walk later that day!)  I've already been to the Boston medical tent once and I have no desire to return. I also want a good finish line photo. I haven't been happy with my finish line photos from my previous Bostons!
If you read all of this. . . you're a real trooper!
at 4:38 PM