3 Weeks Until Boston and OUCH!

With less than three weeks until the Boston Marathon, an injury has popped up, bringing my training to a complete halt. I'm going to document all the details here, mostly so I can go back and reference them, but the punchline is that I am having issues with SI joint inflammation; something completely new to me. The joys of growing older!

How it started
On Tuesday, March 15, I was doing deadlifts with the hex bar during a strength training session with my coach. I have done these many times in the past and I was using a slightly lighter weight than I had used in my previous session. As I completed the set of 5, I noticed a crunchy/pinchy sensation in my lower back/left upper glute. It was so minor that I didn't even tell my coach! When I do strength training I get little things like this a lot. I did a little jog-in-place to shake the legs out but the weird sensation remained. 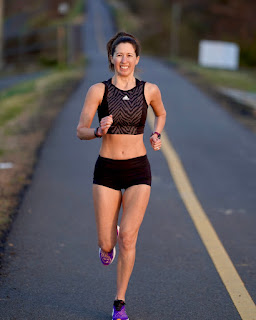 Ever since that session I have had a mild pinching sensation around the left SI joint. I didn't even realize this was my SI joint because I have zero experience with back injuries. I continued to run without any problems or pain. The following Saturday, March 19, I ran 18 miles with 10 at marathon effort (pictured). Even though I felt a little pinch the whole time, it didn't impact me at all and seemed totally minor.

How it progressed
The first red flag was on the following Tuesday, one week after the deadlifts (March 22). I ran a very challenging workout that combined track intervals (1600, 1200, 800, 400) with road miles in between each interval at tempo effort. The workout went really well and I had no pain whatsoever. I hit all my desired paces. Greg took videos and my gait was totally even and balanced.

When the workout ended, that minor pain in my lower back became much more prominent. In fact, it hurt to walk! I walked a little bit and then I began my cooldown. My cooldown was very uncomfortable. I noticed that the slower I ran the more it hurt, but I obviously wasn't going to run super fast on a cooldown. So I cut the cooldown short because my lower back/SI joint was painful.

I told my coach about it and we had a zoom meeting to discuss it. At that point it really seemed like it was a tight glute medius. That seemed to be the bigger problem than the pain around the joint. I'm guessing that the joint pain was exactly the same but that the running caused all the surrounding muscles to tense up, so now I had muscular tightness as well.

I went to physical therapy the next day and my PT said that my glute medius was extremely tight and also that one leg was slightly longer than the other. He did something to get the legs the same length again and did deep tissue massage on the glute. We also did some exercises to get me using the glute normally. I told him I had a hill workout the next day and he said as long as it didn't bother me while running, I would be fine.

So the following day, Thursday, I ran a hill workout with tempo runs in between the hill sprints. Running up and down hill felt fine. The tempo run felt fine. I could feel a slight pinch, but it was totally mild. BUT - just like Tuesday, the cool down run was very painful. I was stiff and it was hard to move.

By Friday, my glute muscle seemed to be in good shape but now the lower back pain around the SI joint was more prominent. That's when I decided to see a chiropractor. In retrospect, I should have gone to the chiropractor the day after I deadlifted (9 days earlier) but I didn't think to do that because it was such a minor issue. He told me my SI joint was out of place and he gave me an adjustment to put it back in place. I unfortunately didn't feel any relief from the adjustment but he said it worked so I assumed everything was ok.

The final straw
The next morning (March 26), it was time for my longest run of the cycle: 23 miles. My plan was to run from Leesburg to Falls Church on the WOD so that the run would feel like it had a purpose vs. an out and back. Greg and I would drive to Leesburg, he would run the first 8 miles with me, turn around, get the car, drive to Falls Church and pick me up.

I was nervous about this run and I was debating if I should even do it. On the one hand, I had visions of the run making the issue so much worse and having to stop on the trail. On the other hand, things felt fine and I really wanted to do the 23-mile run. I was totally looking forward to it and once that was complete I told myself I could take a few days off if needed. I wish someone had told me that you should take it easy the day after a chiropractic adjustment. But I hardly ever get adjustments, so this is all new to me. Also, if I knew that was the case, I may have delayed the adjustment until after the long run!

Greg and I ran 8.5 miles together and then it was time for him to turnaround. I did feel the pain around my SI joint, and it was slightly worse than it had been on the previous weekend's long run. But still manageable. When he turned around, I was fairly confident (let's say 80% confident) that I would be able to make it to 23 miles. Or at least 20, which would still be plenty.

I continued on my own and I stopped briefly at mile 10 to toss my water bottle in a trash can and take a gel. I noticed that my glute and hip were a little annoyed, and the first few steps after the stop were difficult. But once again, totally manageable. But after another mile or so, things really started to go south! My hip started seizing up, my glute was in pain, and my lower back hurt even more. Over the course of 5 minutes, everything started going crazy until I was forced to stop. At 12.09 miles.

I was about a mile away from a shopping center where I could sit inside a Starbucks, call Greg from my Apple Watch and wait for him. But I couldn't walk! I just stood there on the side of the trail feeling paralyzed. Lots of people asked me if I needed help but I told them I would be fine and I was going to call for help. Thankfully, I was very close to a break in the fences/grass/trees that surround the trail and was able to slowly get myself into the back of a parking lot of an office park. If this had happened at mile 15, 16, or 17 I would have been screwed because that's "no-man's land" and there are very few trail exit points.

The pain got pretty bad and it brought me to tears. I knew that Greg still had to run 4-5 miles back to the car in Leesburg so I called my friend Cheryl who lives in Reston. I knew I was in Reston (it was technically Herndon) and I gave her the name of the of the business I was standing in front of so she could find it on Google and come to me. The main reason I needed Cheryl was because it was 49 degrees and I was wearing a tank top and shorts. That's perfectly fine attire if you are moving, but it got cold very quickly when I stopped moving. She found me shivering with blue lips and gave me her jacket as I sat in her warm car. There, she gave me tons of info on SI joint pain (she's dealt with it) and we waited for Greg to come pick me up. Greg called the chiropractor who I had seen the day before and got me in to see him immediately. Thank goodness!

The chiropractor said the SI joint was still in alignment but now the hip was out of alignment and all the muscles around the glute and hip were extremely tense. He corrected the hip, but I still had a ton of difficulty walking around the rest of the day. 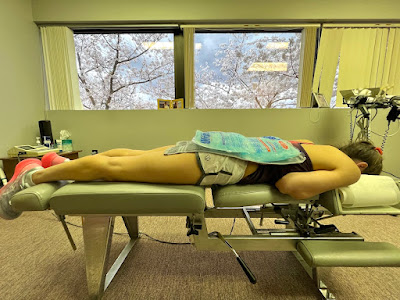 Recovery
I spent the rest of Saturday and all day Sunday icing the area, taking Aleve and using my Rapid Reboot compression system for the hips and glutes. I already had a massage scheduled for Sunday and she did deep tissue work and cupping. Most all movements were difficult. Especially going up stairs, bending over and sneezing. Sneezing was the worst of all.

On Monday I was back in my PT's office for dry needling and a walk on the Alter-G anti-gravity treadmill. The walk was to help my brain realize that everything was okay, I could walk normally, I didn't need to tense up and brace for pain. On Tuesday I was able to get in with my sports medicine doctor who finally provided me with some clarity on the situation.

Official Diagnosis
According to my doctor, it's most likely SI joint inflammation with tension of the surrounding muscles and inflammation around the hip (trochanter). She said there was a slight possibility that I had a bulging disk, which could only be ruled out through MRI. I definitely wanted to rule out a bulging disk, so I am getting an MRI next week.

Because it's most likely inflammation and muscle tension, she prescribed a therapeutic dose of Naproxen (NSAID) and continued PT. If my symptoms don't improve within a week I will go back for a cortisone injection. Normally I would try to avoid an injection, but with Boston coming up, I will do whatever is needed to get to the start line feeling good.

So for now it's rest, PT, and NSAIDs. Once I start to feel better I will attempt running again. I'm going to be fairly conservative, as my goal is to get to Boston feeling good. I don't think I can salvage much training at this point. Most likely it will be a full week off of running and then short, easy runs as I gradually return.

I can now walk with a normal gait and the pain isn't anywhere near what it was over the weekend. I am seeing dramatic improvements each day and I hope this trend continues. This certainly sucks, but I wasn't trying to PR at Boston anyway. I just want to be healthy when I get there.