I chose the 10K this year because I felt like my endurance was strong from the marathon training, but my speed was lacking. Even though I had never run a turkey trot 10K before, I had run this course in 2016 as a New Year's eve race. In 2016, I had set a huge PR by running a time of 42:09. So I knew it was a fast course. 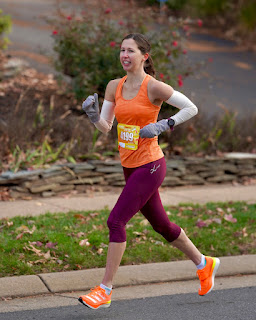 Mindset and Goals
When I ran the marathon a few weeks ago, I was happy with my performance, but I felt like I could have pushed harder during the gravel sections. Those six miles on gravel were my slowest and it was because I was trying to "just get through them" rather than fight hard to maintain my pace. I felt like I could have run 1-2 minutes faster if I had pushed harder and had a different mindset.

So with this Turkey Trot, my primary goal was to push as hard as I possibly could. To never "just hang in there" and to have the confidence to make it hurt more when it already hurt. In nearly every race I run I always have the desire to stop. But I decided that I would immediately combat any negative thoughts and seek out the suffering that comes with racing at max effort. Embrace the sufferings as what I needed to be feeling.

If I did this, I thought I could set a new PR. My current PR was 41:33, set in December of 2020 on a flat course in perfect weather. I did not believe myself to be in "PR shape" and I had not run any workouts since the marathon nearly three weeks prior. And I had no idea if I was fully recovered from the marathon. But, I had nothing to lose, so why not go for it?

Since I believed myself to NOT be in PR shape (and I still believe I was fitter back in December 2020) I thought that simply pushing harder could yield a faster time. Yes, I pushed very hard when I ran the 41:33. But what if I ran even harder, always asking myself to give more?

Before the Race
The night before the race I had pasta with chicken, spinach and sun-dried tomatoes in an olive oil sauce. It's a pretty typical meal for Greg and me before our long runs. Speaking of Greg, he decided to sit this one out. He is running a marathon on December 4, and he thought the turkey trot would take too much out of him. So I had a cheerleader and photographer.

I went back to my December 2020 race report to read up on how I fueled so I could do the exact same thing. An English muffin with almond butter 2.5 hours pre-race, and half a serving of the Maurten Drink Mix 160. And then 15 minutes before race start (during my warm up) a Maurten caffeinated gel.

I had picked up my bib the day before so once we arrived, all I had to do was warm up and use the porta potty. Logistics were super easy and we parked literally 0.1 mile from the start line. I warmed up for just over 2 miles and did some drills and strides.

The weather gets a 10 out of 10 on my race weather scale. Turkey trots almost always deliver favorable conditions. It was 32 at the start, rising to 35 at the finish. Winds at 1-2 mph, and about 70% cloud cover. This is my absolute favorite weather for racing!

The 10K runners started at 8:15 and the 5K runners started at 8:25. This meant that if I ran a 40-minute 10K, I would be finishing with people running a 30-minute 5K. Which is a very popular time! I knew to expect crowding during the final mile when we joined back up with the 5K. I knew I would be plowing through them all so I hoped that would go smoothly!

Miles 1-2
The race started and the big 70-foot hill awaited! In 2016 I had run the first mile in 7:00, so I was aiming to run it in the low 6:50s and then have all subsequent miles be much faster. The nice thing about this hill is that it's not super steep, it's just long. So it doesn't kill your legs; you just need to be patient and accept a slow first mile. My split ended up being 6:47, a little faster than planned. Instead of worrying that I had gone out too fast, I told myself that this was good, and I would continue to hold a high bar for myself.

The second mile was gently rolling and I was able to settle into a groove. There were two women who were both far ahead of me and I was third. I was running with a group of guys but over the course of the second mile I passed many of them. My split was 6:41, which was faster than planned.

Miles 3-4
Since both of my first miles were a good 5 seconds faster than planned, I did not allow myself to ease up for the third. Nope. I had set a high bar and I would continue to get faster and faster. I wanted my third mile to be 6:40 or faster and I was going to make it happen no matter what. And I did. I ran a 6:40.

You know what I didn't really think about? Was how the race felt. Which is a first, I think! Usually it's impossible for me to ignore how much discomfort I am in and I get scared that I will not be able to make it to the finish line. That's when the "just hang in there" mentality comes in. Usually my mindset is as follows. This hurts. I want to stop. But I never stop in the middle of races. Come on, just hang in there.

I finally noticed I was getting really uncomfortable in the 4th mile but then I pushed that thought out of my head and replaced it with "push hard!" I focused on my form. Using my arms to power up the gently rolling hills. Not looking at my Garmin on the up hills because 100% of my focus was the climb. Getting to the top of the hill and knowing I would get some relief, but that I needed to still push. Mile 4 was 6:35.

Miles 5-6
This was it. These miles would determine if a PR would happen. I knew it was on the line. I knew how badly I wanted it. I knew that this pain would last for less than 15 minutes but I would have all day to bask in PR glory. I remembered the feeling of regret for not pushing harder on the gravel of my marathon and I vowed that would not happen today. Negative thoughts, not today! Just hanging in there, not today! Today was the day for pushing hard and it was what I had been mentally preparing for all week. Mile 5 was 6:40, which meant a PR would be possible if I ran my absolute hardest for the last 1.2.

All I had was downhill left. And not a steep downhill that killed the quads, but a long gradual downhill to the finish as a final reward. (This is a really fast course!) So I kicked it into high gear and I gunned it. I joined up with the 5K runners, and there were plenty of them, but thankfully I was able to run on the outside of the pack and there were only a few close calls of running into people. Throughout this mile I ran like my life depended on it and just totally emptied the tank. My split was 6:19 and the final 0.25 on my Garmin was a pace of 5:59. A quarter of a mile at a 5:59 pace after running six very hard miles. WOW!

The Finish
I crossed the finish line and immediately went for the finish line shoot barrier to lean on as I hunched over. I was incoherent for a few minutes and I felt like I might pass out. I was pretty sure I wouldn't - it was jut the shock of the sudden stop after running my guts out for over 40 minutes.

I stopped my Garmin and didn't look down at it immediately. Did I PR!? I had no idea! I had lost all track of math during the last two miles so I wasn't even sure how fast I needed to run, but I told myself it was possible regardless.

And yes, I did PR with an official time of 41:17. This is 16 seconds faster than the 41:33 from last December! Not huge, but not small either! A healthy amount of PRing! I actually thought that if I was going to PR, it would probably be by only a few seconds and I would be lucky to run 41:2x. After all, I believed that I was not in as good of shape as last December, so a PR should not have been possible.

After getting out of the finish line chute, I vomited, I guess I am doing this at short races now. It used to just be half marathons and full marathons. There's just no avoiding it and I think it has more to do with my gag reflex than my digestive system. Because even if nothing comes up, I still dry heave.

I felt sooooo wrecked. I didn't even attempt a cool down. I seriously gave that race every ounce of what I had and I do not think I could have squeezed a single second more out of it. This tops the list as one of my mentally strongest races ever, with zero negative thoughts, 100% confidence and the desire to continue to push harder with every single step.

Greg and I will be making PR Pie later today, and we are still deciding on the type. I feel like with a Turkey Trot, it's more appropriate to have pie than cake. Other times it would be appropriate is if the Garmin measured 3.14 miles in a 5K or if I ever run a 3:14:15 marathon.

Final Thoughts and Key Takeaways
The biggest takeaway for me is that you don't have to be in PR shape to set a PR. Even if your previous PR was set on a pancake flat course in perfect weather. Don't get me wrong - I am definitely "fit" right now. All that marathon training has paid off. But this PR would not have happened if I didn't mentally prepare myself to have an "always push harder" mindset. It definitely goes to show how much of a factor the mind truly is when racing.

Now, if a PR is truly not on the line because of weather or a tough course or me not being in the best shape, will I still have this same attitude? I'd like to, but wow- did that HURT! Greg has said on several occasions "I had no business running that race as fast as I did; it probably wasn't medically advisable." I know what he means now.

Other final thoughts and stats:

This time of 41:17 predicts a 5K time of 19:53 according to the McMillan calculator. So I think that will be my next goal before I start training for Boston. 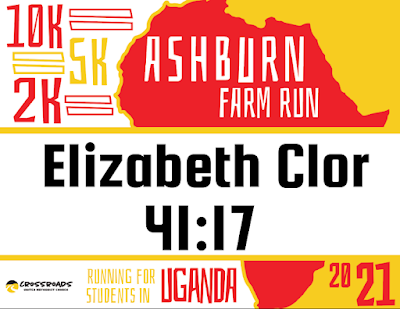