I spent last week recovering from the Two Rivers marathon. I experienced a sleep nirvana like no other. For four nights in a row, I slept straight through the night, with loads of deep sleep (according to my FitBit), and for 1-2 hours longer than usual. I would have expected that with no running, I wouldn't need so much sleep, but it was like my body knew it was recovering from a major event and the sleep was phenomenal. FitBit even gives you a sleep score, and one night I got a 90, which is the highest I have ever seen, followed by a 91! This tells me that I really did leave it all out there on the course and that perhaps I didn't have enough rest going into the race. 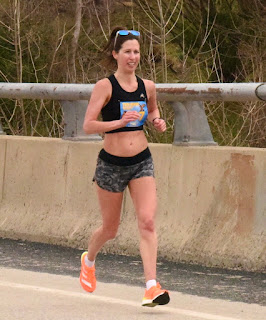 Mentally, I feel much better about the race. I wrote my blog when I was still processing all of my emotions. Of course, that is the main reason I keep a running blog - for reflection and closure on my race experiences so I can move on in a productive manner. My main takeaway is that I ran a solid race on a tough course without having as much of a taper as I needed, given the extended training cycle. I'm proud of my execution and my BQ cushion of over 20 minutes.

Also, running is just one aspect of my life; not my whole life. When I was training at 75+ miles per week it felt like my whole life because I didn't have the time of energy for much else. But getting 10+ hours back last week with no running made me realize just how much of a commitment I made to that training cycle. Unlike with past marathons, I didn't jump to sign up for future races. I only have one race on the calendar (a half marathon in May) and I give it a 50/50 chance of getting canceled. So everything is up in the air with my future race plans, which is a first for me!

Additionally, I have a mild injury, which I am fairly certain stems from the bike accident I had in 2019. While vacationing in Norway, my tire got caught in a rail track, stopped the bike, and I fell onto the bike with my pelvis hitting the bar with a massive amount of force. The area never completely recovered. It was about 95% there and then I ran CIM 4 months after the accident and that aggravated it again. When I started strength training in May 2020, I started feeling it again with lower abdominal exercises. And I noticed that engaging my lower abdomen in any way made the area feel a little sore.

It was extremely mild so I didn't do anything about it. I trained for Harrisburg with no issues. But as I ramped up for Two Rivers in February, I noticed that the pelvic area would get tender from running. During the marathon, it was a little achy, but nothing major enough to even mention in my race report. When I finished the marathon, I did experience some nasty pain throughout the groin and pelvic region, which continued for the rest of the day.

Ever since the marathon, it's been a little achy when I have to use my lower abdominal muscles or when I move my legs in a certain way. I had an X-ray done today and was diagnosed with mild inflammation of the pubic synthesis, which means I need to cut back on running for four weeks, and I am totally fine with that.

Now onto the exciting stuff: I competed in a chess tournament last weekend!

Background
I started playing chess when I was six. I loved it so much that I asked for an electronic chess set for my 7th birthday and I played that thing all the time. It wasn't long before I could beat my dad. Then came the teenage and college years, followed by my 20s when I rarely played. I beat my boss at a job I had in my early 20s and he was just as competitive as me, and he didn't like that I beat him. And so as a general rule of thumb, I learned never to play my boss in chess. It's more important for your boss to like you and respect you for the work you do on the job, not because you can outdo him or her in some other game.

Fast forward to around 2011, the year after Greg and I got married. We took a trip to visit his parents who lived in Albuquerque, NM at the time. His father had a chess set and the three of us played many games because there really wasn't much else to do! This chess binge got Greg, his father, and me all "into" chess again. We set up accounts on chess.com and continued playing each other long after the visit to New Mexico. And then my father also joined chess.com and the four of us would play each other frequently. And then I started playing random people on chess.com.

But back then, I didn't have the mental toughness that I learned through running and through working with a sports psychologist. I would be extremely hard on myself for making a mistake. On chess.com you have a rating and when you lose, your rating goes down. And at some point in 2012 I think, I lost a few games in a row, became super frustrated, and stopped playing on chess.com. Greg and I also stopped playing on the board. We would only play on vacation when the place we were staying had a board. Greg got his rating so high that he stopped playing because he didn't want it to get any lower.

A New Beginning
Fast forward to January 2020, when I saw a Facebook post from Michael Wardian, a professional ultra runner who lives in the DC area. He posted that he was getting into chess and that he was playing games on chess.com. I thought it would be super cool to play him, so I re-installed the app on my phone, logged into an account I hadn't been in for eight years, and challenged him. There are different types of games you can play on Chess.com with regards to how much time you get to make a move, and we played where you have an entire day to make a move. That way you don't have to be on the app at the same time.

Whenever one game ended, we would start another one so that we always had a game going. I started to explore all the features of the chess.com app and I loved doing the puzzles. I even started playing "blitz"games that only gave each players 5 minutes total to finish the game. You win by either checkmating your opponent or having their clock run out faster than yours. I was absolutely horrible at this because it requires you to think fast under pressure.

Before I knew it, I had caught the chess bug again and upgraded my Chess.com subscription so I could play more puzzles, analyze more games, and take more lessons. And Greg got more into it as well. He started doing the puzzles and we started playing more games against each other. He also started watching chess videos on YouTube, which he used to watch years ago, but of course now there are like 100 times more of them available and they are of much higher quality.

Upping My Game
A few months ago, I started talking more with Michael Wardian about chess, and I asked him how he was able to get his blitz rating so high. Of course, he is a naturally "fast" person so he is gifted when it comes to competing at speed. I asked him to share some of his games with me and he did.

I started providing feedback on his games and his desire to improve fueled my desire to improve even more! He totally inspired me to become a better player and also to bring my game to a live, in-person tournament.

Of course all of this did coincide with the release of The Queen's Gambit on Netflix, and even though I loved that series, it is not what heightened my interest in chess. And it's not what made me want to sign up for a live tournament. All credit goes to Mike Wardian. He had competed in several tournaments and had an official US Chess rating. He was also a member of a chess club.

So I found a tournament just 15 minutes away from my house, which occurred last weekend (one week post marathon). Greg, Mike, and I all signed up for it. Back in 2011, I wanted Greg to sign up for a live tournament because he was getting really good at online chess. But he never did, and then our interest in the game waned.

Greg and I purchased an online chess course and it reinforced concepts we already knew, but also taught us new concepts. Chess is like any game or sport; it's a mixture of natural talent and the hard work of training or studying. While the lessons we purchased were a good start, they barely scratched the surface of the complexities of the game. We also purchased a chess clock and annotation books per Mike's recommendation.

The day before the tournament (Friday) Mike came over to my house to play Greg and me live on the chessboard. Playing a live game on the board with an actual chess clock is completely different than playing online. When you can see the person in front of you the dynamic changes entirely, and when you have to manually tap a clock and record the moves on paper, it adds another dimension.

In a live tournament, you make your move, tap your chess clock, and then record your move on a piece of paper. You also record your opponents move. This enables you to go back and analyze your game afterwards. At higher levels of competition, it's mandatory and you need an accurate score sheet to claim a win. To record your move on paper you need to know how to annotate all the pieces and all the squares. This was actually something I picked up quickly, and the more you do it, the more automatic it becomes.

A huge thanks goes out to Mike for coming over and showing Greg and me the ropes of a live tournament. The score book, the chess clock, the rules, and everything would have been totally foreign to us otherwise.

How did it go? Stay tuned for the next blog in which I discuss how I applied the mental skills I acquired for running to the game of chess!