I will never be a cyclist.

Just hours after I published my "Running in Oslo" post last Saturday, my international running adventures came to an abrupt stop. 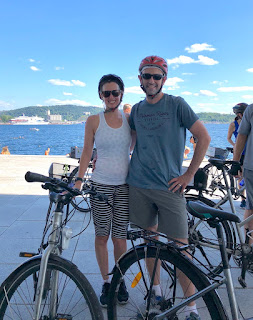 By Bike" excursion a few months ago, and it was my idea. Greg was actually shocked that I wanted to ride a bike. I hate bikes! The last time I rode a bike was in 2007 when I rode 11 miles through Tuscany. And prior to that, I hadn't ridden a bike since around 1994.

But biking is always the analogy people use to talk about things you never forget how to do. It's like riding a bike, they say. If this had been a mountain bike ride, or a really long ride, I wouldn't have signed up for it. But it was only seven miles and it was two hours long. I figured it couldn't be that difficult. I could run, or even walk, that distance faster.

When I first got on the bike, it wasn't a familiar feeling. I had to remember how to balance, steer, etc. Unfortunately, there was no clear area in which to do this. The bike rental place was in the middle of the city and there were swarms of people everywhere. In, fact, we had learned yesterday on our boat tour that this was the busiest time of year in Oslo because many people had time off from work and it was a very popular tourist spot. Plus, the weather was warm and sunny which is not typical for Oslo.

I spent the first part of the bike tour frustrated and scared. We were led through crowded plazas, over speed bumps, up and down curbs, weaving through masses of people. This photo shows one of the areas we rode through, as seen from the boat the day before at the same time of day.

We all had to keep stopping and starting and everyone was really frustrated with it. If I were a pedestrian in that area, I would have been annoyed by such a large group of cyclists plowing through the crowds.

Finally we were on a bike path and I felt more comfortable, and like I was starting to get a handle on the steering, the gears, etc. The guide then took us through a wooded area on a gravel path. It was hilly and curvy and there were roots sticking up, so it was much more difficult than anticipated. Finally I didn't feel like the worst cyclist in the group because I was able to go up the hills just fine and my athleticism kicked in.

We stopped at a beach for about 15 minutes (this is why the tour was long--we kept stopping). Greg snapped a photo of me and I posted it to my Instagram Story, saying that this was the last time anyone would see me on a bike. At that point, I knew that I had no desire to ride one ever again, That said, I was proud of myself for stepping outside of my comfort zone and getting on a bike. I wasn't looking forward to the way back, though, knowing we'd have to bike through that busy plaza. I also thought it was kind of a miracle that I didn't have an accident and wondered if I should take the bus back and end it on a high note.

We got back on the bikes and rode through the woods again. Only this time, I wasn't able to maneuver the bike as well I should have been able to. Since the path was wide, we were not riding in a straight line, and people were riding next to me. There was a fairly steep hill that curved around, and as it curved, I wasn't able to properly steer while also getting up the hill, so my bike hit the back of another rider's wheel, and I went tumbling. Nobody else fell, but I was on the ground with just a minor scrape. It was really scary, but since I wasn't hurt, I got back on the bike, vowing to stay away from the other riders.

We got back onto the bike path, which was great, but then it was time for the crowded plazas again. I don't know why I simply didn't get off the bike and walk it back to the shop. We were close enough at that point. If I really stopped to think about it, I would have done that, but instead I felt like I had to keep following the group over the curbs, the speed bumps, and the train railways.

There were actually two tour guides-- one in front and one in back. The one in the back told the one in the front that she needed to slow down on multiple occasions (every time we stopped), but she didn't slow down. At one point, the tour guided us to drive in the middle of the train railway. This area was clearly for trains only- not pedestrians or cyclists. To do this, I needed to cross over one of the railways to get in between them, as there was no room left on the right side of the railway. As I did this, my tire got stuck inside the rail and the bike stopped. I fell onto the bike, ramming my pubic bone directly into the bar. I screamed in pain and in fear. It was maybe the worst pain I had ever experienced.

I walked away from the train track full of fear, and Greg and the tour guide from the back of the group came toward me. The other riders and the guide in front had no idea that I had fallen. Since we were so close to the bike store and the cruise ship, the tour guide from the back took our bikes from us and we walked back to the ship to get an X-ray. It hurt to walk, but thankfully, I was able to walk.

Back on board, I found that the entire left side of my groin was hugely swollen. They did an x-ray and found that nothing was broken. I was in extreme pain, but they weren't able to give me anything except for Advil and an ice pack. I really liked the nurse and the doctor, but they weren't specialists in this kind of thing and weren't able to give me stronger pain medication. That night, Greg and I ordered room service as I continued to ice the area.

The swelling and the bruising were severe over the next five days. Today, one week later, the bruising is still dark blue over much of that entire area, and looks worse than this photo, extending all the way down to almost my knee. Seeing so much swelling and bruising made matters worse, as it was a constant reminder of how harsh the blow was.

I tried my best to enjoy the rest of the trip, which included stops along the coast of Norway, ended in Bergen. I was in constant pain, and walking wasn't easy, but it didn't seem to aggravate the issue. The worst part was not knowing the extent of the damage. All I knew was that the area was very swollen and painful, and I had a sizable hematoma. Regardless, Greg and I had paid a lot of money for the trip and been looking forward to it for over a year, so I wasn't about to let this accident ruin it for me. As I wrote about in my previous two posts, I love running around new areas on vacation. So it was definitely a bummer to not be able to run in the port stops during the rest of the trip.

We returned home on Thursday evening, and I saw a doctor yesterday. The swelling is gone, but I have a big bump on the left side of my pubic bone, which is the hematoma itself. Even at rest I have a small level of pain, and running definitely aggravates it. My doctor was able to isolate the muscle group that was impacted, and it's the lower abdomen. Thankfully, all of the adductors are in great shape. I never realized that the lower abdomen was used so much in running, but it is painful with each toe-off, so I guess it's pretty critical.

So as of now I have the constant pain of the hematoma, as well as an inflamed/irritated lower abdominal muscle that is painful to run on or to move in certain ways. I do not know when I will be able to run again.

I think this injury is difficult for me on a number of levels, mostly because it feels like something was taken from me.

1. I wish I would have followed my gut instinct and gotten off the bike instead of following the group over the rail tracks.

2. I have been taking it easy all summer with running and had planned my race schedule around being able to start training more seriously after this trip. Instead, I'm digging my hole deeper and will need to rebuild before progressing. I really thought I'd be able to crush a 10K in early October, but now I'm doubtful.

3. I don't know when I will be able to run again, so I am dealing with uncertainty and things being up in the air. And even if I am able to run, I don't know how long it will take to be completely pain-free.

Now that I've gotten that off of my chest, I do have the perspective that I am lucky the accident wasn't worse. I wasn't seriously injured and I can walk. Nothing is broken. This isn't as bad as having mono because I am still able to walk around, go to work, and live my non-running life.

I do blame myself for not trusting my instincts and for following a group of people who were riding in areas that I felt unsafe in. (Later, the other people on the bike tour said that they felt unsafe, too, and didn't find the ride enjoyable because of all the obstacles. One person also got their tire stuck in the railway, but he was able to stabilize himself and not fall.) But, on the other hand, I am not beating myself up too much because I was just trying to get the most out of our time in Oslo, even though it meant hopping on a bike.
at 3:01 PM