Yesterday morning I ran the Tidewater Striders Distance Series 10 Miler in Chesapeake, VA. I'm so happy I did!

Spring Race Planning
A few days after the Harrisburg Marathon last November, I registered for the Myrtle Beach Marathon, which would occur on March 6. In December, I began plotting out the rest of my spring race schedule. This was no easy task. Ideally I would run a half marathon sometime in late January or early February as a tune-up. And also because I thought I would have the fitness to go sub-1:30.

I searched high and low for a half marathon in that timeframe but the only ones available required getting on an airplane. Greg and I wanted to avoid air travel for the sake of our health but also because it would 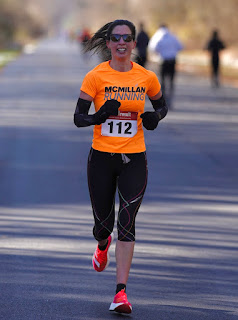 complicate logistics. The half marathons within driving distance were all insanely hilly. I ran the Hanover Half Marathon last fall which totally destroyed me due to the hills, and I wanted a fast course this spring.

My friend Allison had the novel idea of seeking out a ten-miler instead. I love 10-mile races but they are far more rare than half marathons, so I didn't think I'd likely find one. But I did find one. It was pancake flat. Check. It was within driving distance. Check. It was the last weekend in January. Check. I snagged the very last spot and when I went to register Greg, there were none left! He didn't mind though, and was happy to play the role of cheerleader/photographer.

On Tuesday of this week, Myrtle Beach announced that the marathon would be pushed to May. I would definitely not be running a marathon in South Carolina in May due to the heat. This news stressed me out because I had just logged three 70+ mile weeks in a row and I wanted to run a marathon on March 6. Now it was back to the drawing board for the marathon. Time for more research! But, on the plus side, it made me more motivated than ever to race the 10-miler because I knew that race was a sure thing.

OR WAS IT!? On Thursday, the Chesapeake area got a few inches of snow. And the race was held on a paved trail that does not get treated or plowed. The last thing I wanted was to try and race on a course with icy patches everywhere. But how would I know? The temperature wouldn't get above 36 in that area, and I wasn't sure how much sun exposure the course got. I posted a message to the Tidewater Striders Club Facebook page asking if any of the locals planned to run on that trail on Friday morning. Thankfully somebody said that they were going to scope it out. I should note that icy patches would be a deal-breaker for me whereas some people would be okay with dodging them. I am very timid when it comes to slippery surfaces so I would not be able to race confidently if I knew I might slip.

I canceled our hotel room to avoid a cancellation fee. (Chesapeake is a 4-hour drive south, so a hotel was required). I figured if the race was on, I could always re-book it. I went to bed Thursday night not knowing if I would actually run the 10-miler. Friday morning arrived and I still had not packed or laid out any of my race things. This was a first for me! Finally, at around 10:00, I heard back from Facebook that the trail was all clear and no black ice.

I packed for the race and Greg and I left the house two hours later.

Nutrition and Fueling
If you read my Harrisburg Marathon report, you will know that I had major digestive issues which prevented me from running hard. I need to figure out a fueling strategy before my next marathon. Here is what I ate on Friday: 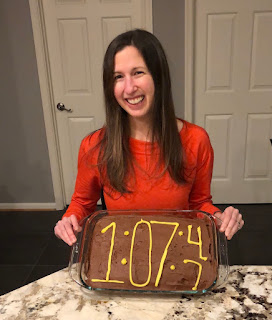 really no need to hang around the finish line as there would not be an awards ceremony. We arrived back at the hotel where I showered, packed up, and then we met my college roommate and her husband for lunch. They live in the area so whenever I go there I try to see them.
We then drove home, stopping at the grocery store along the way to pick up cake batter and the ingredients for frosting. It was PR Cake night! I settled on a butter cake with chocolate buttercream frosting. Dinner would be shrimp scampi and there would also be beer!
Final Thoughts and Key Takeaways
I'm calling this a PR by two full minutes. Of course it depends on which time you use as my previous PR, but any way you slice it, I was solidly under all of them.
This is very encouraging for me because I was starting to feel that I had been plateauing. I had been setting some PRs but they weren't all that significant. It was like a few seconds here and there, but overall I wasn't convinced that I was becoming a stronger and faster runner.
Not only did I set a PR, but this is the fastest race I have ever run, relative to other distances. What do I mean by that? Well, if I plug this 1:07:47 into the McMillan Race Calculator, the equivalent times are: 5K in 19:32, 10K in 40:33, half marathon in 1:30:25, full marathon in 3:10:16.
I have never run any of those "equivalent" times, which means this 10-mile is my "fastest" race on a relative scale. My goal for my upcoming marathon is 3:10, so as long as my training continues to go well, I should have a great shot at that come March.
As for my spring marathon, the plan is to run this same course on March 27! The Tidewater Striders are holding a "BQ Invitational" marathon for 250 runners on this course and I'm obviously a fan of the Striders and this course. The marathon would be two out-and-backs on this paved trail. Boring, but fast. This means I have to extend my marathon training for three weeks, but I don't think that will be a problem.
Nutrition-wise, I think what I ate generally agreed with my stomach. During the marathon I will follow a similar plan, except I will need to drink water during the race and have gels during the race. The question will be how many and when. Thankfully I have time to experiment.
I'm so thrilled with how fast I ran this race, and particularly how I rallied in the end with the headwind and getting my time under 1:08. A lot of mental and physical work went into this one, and it was well worth it. 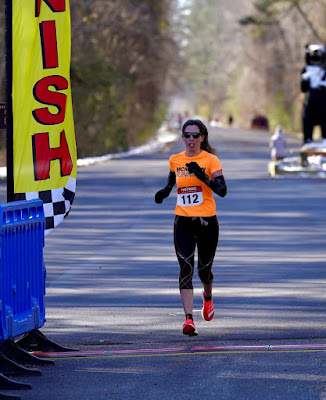