BYOB: Bring Your Own Bib

When you really think about it, it doesn't take much to have a race. You really don't need t-shirts, medals, chip timing, age group awards, online race results, course certification or any of that. Sure, all that stuff makes the races feel important and celebratory and they are important, but they are not essential.

What do you need:

Think about two children: "Race you to the end of the street?"  "Sure, Kelly can be the judge!" And boom- you have a race.

I was originally scheduled to run the St. Pat's 10K in DC this morning, but since that was canceled, I realized that I could still run a 10K on a measured course: the track. 25 laps around the track is exactly 10,000 meters. Greg agreed to be the timer (and photographer, and cheerleader) so all that was needed was at least one other runner.

I texted my friend Amber who is of similar ability to me (just slightly faster, so she keeps me on my toes). I knew that her half marathon this weekend had been canceled and she's often up for doing things like this! She agreed and suddenly, a 10K race as back on the calendar. We called it "The Social Distance 10K" as a play on the word "distance". I thought about calling it the Quaranten-k, but preferred social distance.

Before the Race
Greg and I met Amber and her friend at 7:30 at the local track with the goal of starting around 8:00am. The runner-to-spectator ratio was 1 to 1! The track even had porta-potties to make it feel like the bigger races.

It was 39 degrees with a light mist and 7mph winds. On my weather scale, I would give this an 8 out of 10. Wind can be more brutal on a track than in a regular race, so if this had been a road race, I would have rated the weather a 9. We really lucked out.

We warmed up for two miles and discussed our race strategy. Thankfully, Amber was okay with running clockwise around the track, which is technically "backwards" because my left hip can act up with too many turns going the other way. The target was a pace of 6:40, which is super easy to pace on the track. It's 1:40 per lap. Using my Garmin as a stop watch, this meant that I was looking to see 1:40, 3:20, 5:00, and 6:40 every four laps. Then I would hit the lap button and aim to see those numbers again. I told her I would pace us like that for the first two miles, and then whatever happened, happened!

If I was able to achieve a 6:40 pace for the entire run, it would be a PR. An official PR, because this race had everything required to be a "real" race. There would be no disputing the distance or the time, or the fact that I had competition. I even wore a bib! It was important for me to feel like this was a real race. Amber brought a bib but accidentally left it in the car, and I hadn't noticed.

Miles 1-2
We were all warmed up and ready to go at 7:59. We told Greg we were ready and he counted down for us and when he said "Go!" we went. Music was playing through a bluetooth speaker, and we had it turned up as loud as possible. It was only audible for a small portion of the track, but it was still nice to have. I can't even begin to tell you what songs we heard because I was so focused on my running. 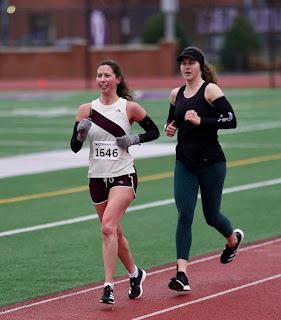 Everything went exactly to plan for the first two miles. Amber later told me that I was the perfect metronome to run behind. I hit the 1:40, 3:20, 5:00, 6:40 with precision each time. These miles felt comfortable and controlled and the pain had not yet set in.

Miles 3-4
After about two miles a soccer team walked onto the field. It was an adult team and I had seen them before. I highly doubted they would try to kick us off or had any more right to the track than we did, so I didn't worry too much. I think they could tell it was an intense event, given that I was wearing a bib and we were running very close to each other.

After about 11 laps, Amber pulled ahead of me slightly. It was nice to have her in the lead because there was a windy stretch of the track and she helped block that. Greg was taking photos and going "live" on Instagram for my followers to watch in real time.

Mentally, I kept repeating the lap number over and over in my head. It gave me a mini-goal to shoot for and kept me laser focused. Amber started to pull ahead of me after about 15 laps. I tried to stay as close to her as possible but she definitely began to widen the gap.

Miles 5-Finish
By this time, I had stopped trying to pace and just started running as hard as I could. Of course the urge to stop was tempting, as it always is in a race, but I kept the effort level up and keep running the laps. The further ahead Amber got, the harder it was to stay positive and push hard, but I kept reminding myself that this was truly my race and I needed to be strong.

Amber was about 30 seconds ahead of me (almost halfway around the track ahead) when she finished lap 24 and stopped. I saw her stop and I realize she had miscounted. I ran past Amber and Greg with no energy to say anything at that point. I ran the final lap in 1:37, which is a pace of 6:30.

After the race
Greg was live on Instagram during this whole ordeal, and got a video of Amber realizing that she didn't run the 25th lap. Thankfully, she was able to laugh about it, and call it a six-mile PR and her longest track race ever.

My time was 42:16, which is 25 seconds off of my PR. I definitely think I am in PR shape right now and capable of faster, but that's hard to do on a track with just one other competitor. So, I'm mainly just happy with my effort level and the fact that I played the role of race organizer so I could still race. Nothing will stop me from racing if I can help it.

It was definitely a fun morning and Amber and I plan to do another one of these soon, since the Cherry Blossom 10-miler was canceled. Greg has been training for the Providence marathon in Rhode Island on May 3rd, and so far that race has not canceled. Right now, the plan is for me to run that race too, and I will train for it until I hear word that it is canceled. Part of me hopes they wait as long as possible to cancel it because I really like marathon training and having a goal. The longer I can continue to train with a goal in sight, the better. Even if, in the end, the goal race evaporates. The opposite attitude would be "I did all that work for nothing!" My attitude is "I want to do all the work, and believe in something, while being aware that the something might become nothing." 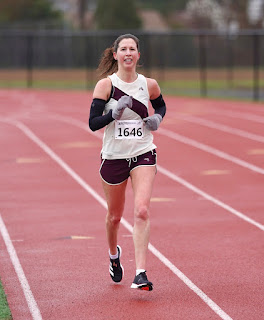 Up next will likely be a time trial the weekend that Cherry Blossom was scheduled for (April 5th). The distance and location is still TBD. It could be a repeat of this track 10K, or potentially we could shoot for 10 miles on a the towpath or W&OD.  My coach is definitely in favor of this approach.
at 3:21 PM