Today I hit day 160 of my run streak! Not having a marathon to recover from makes it possible for me to run every day and I am lucky that I can do so without injury or illness. I have no idea when I will end the streak, but I hope it's by choice when it happens. Here are some highlights of the past 30 days.

Training for the Mile 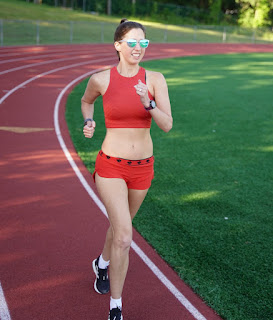 I'm training for the Indianapolis Monumental Mile. This is a virtual race when I can run at any time between June 22-30. I'm planning to run it on Friday or Saturday and will blog about it once I do. The beauty of training for a virtual mile is that I've never raced the distance non-virtually. So I am only comparing apples to apples where a PR is concerned. My goal is sub 5:50.

My coach has prescribed some high-intensity speed work on the track which has really helped build my confidence and ability to pace. I've done 3 time trials on the track, which I will write about in more detail when I recap the virtual race. I've managed to get faster and faster each time, which I mainly attribute to knowing how to pace it and gaining the confidence to start fast. My biggest fear with this distance is crashing and running far under my capability.

Strength Training
I started working with a running-specific strength coach at the end of April. We have weekly sessions over Zoom and in between those sessions I have a program I do on my own. I really like the accountability of a coach (since I always seem to have an excuse for not strength training) and I like having the feedback on my form. Plus, she has been able to identify my areas of weakness and build a personalized program.

Most of the exercises are compound exercises which require a very stable core while I am lifting a weight or pulling a band. Glutes and hips are a big focus, but also the lats and the shoulders of the upper body. I do feel like I have more power when running and that I can get my knees higher and drive forward more efficiently.

Snake in the Basement
My run streak almost ended on day 150. I woke up feeling abnormally tired. I felt lethargic and like I didn't have my normal energy. That was a "yellow light" for me, meaning that I might be on the verge
of full-blown mono, so I decided not to run that morning. I figured that I could always run later in the day on the treadmill if my energy level improved.

This turned out to be a blessing in disguise. I had planned to run on the treadmill, but since I didn't, Greg went down to the basement first and he saw a snake! This prevented me from having to see the snake, or run on the the treadmill with a snake nearby. I was able to find a local snake expert to come by and help, but by the time he arrived, the snake was nowhere to be found.

The adrenaline of the snake situation really perked me up and by the end of the day, I felt completely normal. I decided to run just 2 miles outdoors to keep the streak going. No way was I going into the basement! Thankfully, Greg heard the snake moving around two days later, called the snake expert, and he was able to come over immediately and remove the live snake with his two hands! It was a lot larger than I had imagined. We think we identified how it could have gotten in and sealed up that area.

Poconos Mountains
We dealt with the snake just in time to leave for a mini-vacation to the mountains. We were so worried that we'd be gone for four days and that snake would just be hanging out. Greg and I booked a 4-night stay at the Lodge at Woodloch-- and all-inclusive spa retreat in northeastern Pennsylvania.

We really just wanted to get away, take some time off of work and focus on relaxation. We didn't do much while we were there other than relax, eat, and take in the beautiful scenery. The running situation was challenging. It was the mountains so all of our easy runs had insane elevation gains and losses. One of the runs was only 5.4 miles but had 540 feet of gain! I usually don't even run that much gain during a long run.

Thankfully, two of the four days were prescribed track workouts. We found a high school track that was relatively close to our resort and we were able to run on a flat surface. The weather was amazing. Each morning it was in the low 50s with low humidity. A dream come true! During the day, it would rise to the low 70s, still with low humidity. We were truly blessed, particularly because we had to eat all of our meals outdoors. 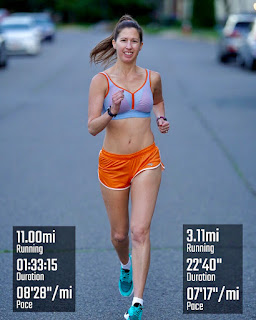 When the St. Pat's 10K was canceled last spring, I signed up for a smaller race: Lucky Leprechaun. But 24 hours after registering, that race got postponed to June. And then at some point in May it turned into a virtual race.

I had pretty much forgotten about it, which was kind of a shame because we had unseasonably cool and non-humid weather on the morning when the virtual race was to occur (June 13th). Instead, I had a long run on the calendar. So I decided to run 11 miles at my easy long run pace, and then restart my Garmin for 3.1 at the end.

Fall Races
I am still undecided about my fall race plans. I originally signed up for the Rehoboth Beach Marathon because I wanted to run a late fall race. But now that we are no longer going to be in Africa at the end of August and into early September, I could start training earlier and run an earlier marathon. I am actually looking at running the Marine Corps Marathon for charity because it's local and I have not run it since 2006. As of now, the Marine Corps Marathon is not canceled so I am optimistic.

Another choice would be Philadelphia. That has been on my list for a long time and I've never done it. It would not require a flight and the weather is likely to be cooler than Marine Corps. Pennsylvania, however, is one of the the strictest lockdown states, so I am not as optimistic about that race occurring.

I do have a hotel reserved in Indianapolis. I ran really well there last year for the half marathon and was hoping to return. But it does require hopping on an airplane and it will not be a new experience. Indy Monumental is currently planning to have both a real race and a virtual race. Indiana is not as strict with their lockdown as other areas, so it could actually happen!

Rehoboth is still a possibility, but I might want to save that for 2021 because we are planning to go to Africa in August of 2021 and we will need a later fall marathon. I've heard that Rehoboth Beach is very strict with their lockdown, so that race might not actually occur.

We're coming up on a particularly warm and humid week here in the DC area, so I need to take it easy in preparation to race the virtual mile this weekend.