Dulles Day 5K on The Runway

I ran the Dulles Airport Runway 5K this morning, which was my 3rd 5K in six weeks. I ran the Leesburg 5K on August 18 and the Great American Labor Day 5K on September 2. Each of these races was faster than the one before it, and I am now done with the 5K until my Turkey Trot.

Before the Race
The race started at 7:30, and is only 4 miles from our house. I expected it would take no longer than 10 minutes to get there so I planned to leave the house at 6:35. We ended leaving at 6:40, which I thought was still okay, since I already had my bib. All I needed to do when I got there was to warm up for 20 minutes.

Unfortunately, there was crazy traffic as we approached the Air and Space Museum parking lot. This Dulles Day race has both a 5K and a 10K, which were sold out at 2,500 runners. That's a lot of cars all trying to get to the same place at the same time.

At 6:50, I started to get nervous because we were still stuck in traffic. At 7:00, I hopped out of the car, and ran to the race start while Greg (who wasn't running the race) parked. We were only half a mile from the parking lot, but I wanted to start my warm up at 7:00, so it was a good opportunity to run. One of the traffic cops said "it's better running than it is driving!"

I was wearing my Brooks Ghost shoes and carrying my Nike Vapofly shoes in a bag. To get through security faster, I took the shoes out of the bag, scrunched up the bag in my hand, and went through the "no bags" line. After security, we had to walk through the Air and Space Museum to get out to the race course. I continued to jog slowly, but a museum official told me I needed to walk. Bummer! Oh well, it wasn't long before I was outside again and I continued my warm up.

I didn't know when I would see Greg, especially since he would have to wait in the longer bag line. 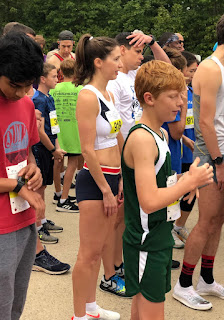 He had a cooler with ice and my Energice pop. After about a mile, I waited in a porta potty line as I changed into my Nike Vaporflys. Then, I warmed up for a mile in them. I heard the announcer say that they were delaying the start by 10 minutes. I'm pretty sure this was because of all the traffic.

Based on my last 5K, I determined that I prefer the Adidas Adios Boost for the 5K distance. However, the runway is concrete, so I figured the bounce of the Nike Vaporfly would be advantageous. I plan to return to my Adidas for the Turkey Trot.

I still hadn't seen Greg, so I hid my Brooks shoes behind a car parked on a grassy area and lined up. Just a few minutes before the start, I saw Greg and he offered me the Energice pop, which had since melted. I drank about half of it. I lined up in the second row, and I heard the man in front of me say, "my plan is to walk, and then run, and then walk." (He's not shown in the picture).

My goal for this race was to beat my Labor Day time by 20 seconds, which meant sub-20:50. I thought that was reasonable, given that I'd have two extra weeks of training under my belt, and the runway is flatter than the Labor Day course. The reason why I haven't been trying to come close to my 19:58 PR is primarily the weather. All of these races have been very humid, which equates to slower times. This morning, it was 67 degrees with 90% humidity.

Mile 1: 6:43
The race started and the man in front of me, who was in the first row, literally walked off the start line. I bumped into him a little bit. I knew he would be slower, but I didn't think he would actually start off with the walking! Anyway, once I got going, I focused on the number or women ahead of me. There were four of them. At first, it seemed like maybe I would be in a position to win the race, but towards the end of the mile, the first two women had pulled ahead quite a bit. I passed the two other women, putting me in third, but then another woman passed me, leaving me in 4th place at mile marker 1.

My plan was to run this mile in 6:40. Based on my race report from 2015, and my Strava data, I knew that the first mile had an incline with a gain of 25 feet. My goal pace was around 6:37, so I planned to run negative splits, speeding up during the last "down hill" mile. My actual split was 6:43 and it felt really hard. I didn't have a lot of "pep" and I wasn't sure if that was because of the concrete, the humidity, or if I was just having a blah day. I pushed on.

Mile 2: 6:48
I really struggled here. I ran this mile next to a kid who looked to be about 10 or 11 years old. He was strong and he pulled me along. I had been planning to run this mile at goal pace of 6:37, but that was not happening. I just did my best to stay strong and not let any women pass me.

I think this course is mentally exhausting. There is not much to look and you can see almost the entire course. There is no variation to keep you engaged, so it's easy to coast. I don't consider myself a particularly strong hill runner, but I think I got some power from those hills two weeks ago that I wasn't finding today.

Mile 3: 6:42
I kept pushing on, just trying as best as I could to maintain the hard effort level. The kid I was with
dropped back so I was on my own. With about a quarter mile to go, I saw Greg taking photos. That coincided with the downward slope of the runway, so I was able to pick up the pace. I knew I had secured 4th place female, so now it was just a matter of what my finish time would be. I had originally envisioned this mile being sub-6:35, but that didn't happen.

Although this race was faster than my Labor Day race, I wasn't as happy with it. I know I gave all I had to give, so I'm not disappointed in my performance. It was simply a "meh" day with "meh" energy levels on a "meh" course. I don't think it's an indication of my fitness level, and I'm still confident in my ability to run a 10K at a faster pace than I ran today in early October.

I had read my 2015 blog post a few days before the race, and as a 36 year old, I missed getting an age group award because a 40-year old beat me. I was annoyed by that. This year, I was that 40 year old who took first place in the 31-40 category. And, one of three women who beat me was 42! So if they had done normal age group brackets, I would have placed second. So this age group thing screwed me over in 2015, but worked to my advantage this year. Also, I was inspired by a 55-year old woman 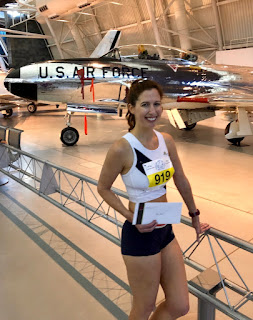 I won a $25 gift certificate to the Dulles Airport Marriott restaurant. Yay! Thankfully, we live close to the airport so it will be easy for us to use this.