It doesn't come much flatter than this.

I admit that I was hesitant to register for the Dulles Airport Runway 5K. It seemed a little wonky to hold a 5K on a runway, and I wasn't thrilled about running on a concrete surface. I also thought it could be warm since there would be no shade on the runway. That said, this race fit nicely into my overall schedule, and it was flat.

My coach was really impressed with my summer 5K progress. I had run several hot and hilly 5Ks at paces that were very close to my PR. He wanted to see what I could do on a flat course in cool weather. I am signed up for my annual Turkey Trot on Thanksgiving, but he thought doing something
sooner would be good. I knew that this weekend still had the potential to be warm, but I am running a 10K in two weeks, followed by a half marathon two weeks after that, so this weekend seemed like the best choice.

Initially, I thought I had a decent shot at running a PR. I thought that a pace of 6:50 would be realistic, and I ran a workout on Tuesday morning that indicated 6:50 or faster was within my grasp. But it was over 10 degrees cooler on Tuesday.

Before the Race
One of the cool things about this race is that you walk through the Smithsonian Air and Space museum to get out onto the course. I had been to this museum several times in the past, but it was still nice to walk through it. I started my warm up shortly after arriving, which proved to be a challenge. Because of the high level of security, we were not allowed to warm up on the course, which meant running back and forth and back and forth on a quarter-mile stretch.

I used the warm up to get a sense of how running on concrete would feel and it definitely felt different. Not dramatically so, but I didn't feel as "bouncy" as I normally do when running. I even wore shoes that were slightly more cushioned than I would typically wear in a 5K to minimize the impact.(Elixirs instead of Sayonaras, for you shoe geeks.)

After warming up, I met up with one of my co-workers who was also running this race. She had run it in the past and I told her I was doing it this year, and suggested that she run it too. It was great to see her and she was in high spirits. After chatting with her for awhile, I did a little bit more of a warm up and then lined up fairly close to the front of the race. I started scoping out the competition.

In terms of award structure, this race was abnormal. It was being managed by =PR= from a course and timing perspective but I am guessing the race organizers (not =PR=) setup the award structure. There was a huge award for the first place male and female-- a round trip flight to anywhere in the
U.S. from United. And there was no award or recognition of the 2nd or 3rd overall finisher.  In terms of age groups, they were split up into groups of 19-30, 31-40, and 41-50. Typically, age groups are
20-29, 30-39, 40-49. This meant I was competing against 40-year-olds vs. 30-year-olds, which I didn't really care about, but was atypical.

In terms of age group awards, only the top two finishers were recognized, as opposed to the top three. So, not only were they cutting out awards for 2nd and 3rd place overall, but also for 3rd place age group. At the start line, I looked around and noticed at least two other women who looked to be competitive runners in my age group.

It was 64 degrees and sunny with 95% humidity. The course was only shaded for the first quarter mile and last quarter mile. The majority of the race was not shaded (it's a runway after all). I decided to continue with my plan of running a 6:50 pace, since I had been performing pretty well in the heat all summer.

Mile 1- 6:55
The race started and I eased into it. Usually I bolt out really quickly during the first minute with everyone else, but I didn't do that this time. The first time I looked at my Garmin, about three minutes in, I noticed I was running a 7:02 pace and told myself to pick it up. It kind of felt like we were running on a slight incline, and that suspicion was later confirmed by my Garmin data. It was one of those situations where it looked completely flat, but it was a slight incline which made it just a tad harder to run at goal pace. I used the first mile to settle into my pace. My main observations were that I did not at all like the concrete and that it was hot. I didn't feel like I had a bounce to my step and the humidity felt icky. I told myself to keep a positive attitude and to continue to push hard.

Mile 2- 6:55
It definitely was cool running on the runway, but more challenging than you might expect. Probably because I just wasn't used to it. I was used to hilly neighborhood roads with some shaded areas. It was kind of like running on a track, but with a much firmer surface. I was looking forward to the turnaround point because it's always mentally easier to be running toward the finish line and to know the race is halfway done. In terms of passing people, I had passed a few people in the first mile, but
during the second mile I was holding a steady place. Nobody passed me and I think I may have only passed one person. There was a woman about 10 seconds ahead of me who I had my sights on for the entire race. I wasn't sure if I would be able to catch her or not because we seemed to be running a similar pace-- only she was up ahead of me.

Mile 3- 6:52
I was definitely ready for the race to be over at this point. I felt strong, but I also felt like the humidity was making things tough. One we reached the last quarter mile, which was shaded, I also started to feel like I was running a decline. This confirmed my initial suspicion that the course wasn't 100% flat. It was nice to have a little bit of relief in the shade and the decline, so I sped up slightly, simply by maintaining the effort level.

Last 0.13: 6:24 pace
My finish line kick was strong enough for me to feel great about it, but not so fast that I felt like I could have run the whole race faster. There's that window where you want to feel like you can really hammer it in, but if you go REALLY fast, then you start to think you had too much left. My pace for a 400m is 6:00, so this 6:24 was significantly faster than the rest of the race, but not to the extent of my 400 pace.

Progress Analysis
I stopped my watch just after crossing the finish line and it read 21:33. Just 4 seconds off of my PR! When I checked the official results, they had me at 21:35, which was a little annoying, because I know I started and stopped my watch exactly when I crossed.

According to my Garmin, my average race pace was 6:54, which is the fastest it's been all summer. Even though I was hoping to run a PR, I am still very pleased with how I did.

I was the 5th overall female out of 785! Oddly, that won me no official awards. Two of the women who finished ahead of me were in the 31-40 age group, and one of them was a 40-year-old.

Below is a recap of my 5K races year-to-date. This is my longest focused effort on the 5K, and hopefully when I run the Turkey Trot, the trend of progress will continue.


Thanks to my husband, Greg, for coming to support me and taking all of the wonderful photos! 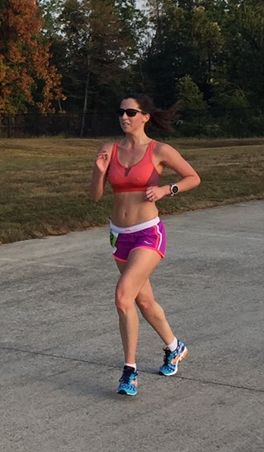