Keeping up with the times: Nike Vaporfly thoughts

If you could run just a little faster without having to train any harder, would you? The Nike Vaporfly 4% shoes had me asking serious questions about why I run.

For those of you who have never heard of the Nike Vaporfly 4%, they are supposed to make you run faster. They were introduced in 2017 at a price of $250. When they first launched, they were nearly impossible to find because retailers would sell out of them immediately. There was a ton of hype around them and runners everywhere were trying to get their hands (or feet) on these shoes! A few months ago, Nike released the Vaporfly Next %, which is supposed to make you even faster.

Does the Nike Vaporfly actually make you faster? Many runners have supported this claim, saying that they believe the shoes helped them shave some time off of their PRs. My friends who wore them told me that they were really bouncy and had a lot of cushion. Supposedly, you also recover faster from long runs due to the extra cushion in the shoe. Normally a highly cushioned shoe does not equal fast, so I was intrigued. One major caveat about the shoes: they wear out faster than a normal trainer. If you normally get 300 miles on your shoes, you might only get 200 on your Vaporflys (Vaporflies?). They are not recommended for daily use and are mainly intended for the marathon and half marathon.

When they first came out, I decided they weren’t for me. If I set a PR, I didn’t want it to be because of the shoes. I didn’t think I would get as much satisfaction. It’s not cheating, but it’s an advantage that I wouldn’t have had previously. What motivates me most in running is setting goals and accomplishing them. Could I really feel accomplished if I thought that a special shoe was the reason I PR’ed?

So I didn’t go near the Nike Vaporfly and continued to race in the same shoes I had been racing in. But each time I showed up to a race, more and more runners were wearing the Nike Vaporfly! At Sugarloaf, for example, I looked down at the start line into a sea of Nike Vaporfly. And then another footwear brand released a shoe with similar technology: a carbon plate. I realized that this was the future of racing shoes, and they were only going to become more popular. Soon, each running shoe brand would have their own version.

At the same time, more and more runners are qualifying for Boston, which made the B. A. A. lower their qualifying times by five minutes last year. Runners are generally much faster than they were five years ago, and I do think the Vaporfly has played a role. 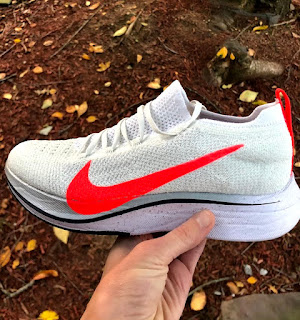 With this realization, I figured I should hop on board and give the shoes a try! After all, running is a competitive sport, and I started to feel like I was at a disadvantage for NOT wearing the Vaporfly. How would I feel if someone in my division beat me wearing the Vaporfly? Annoyed! So I bought a pair and will race a 5K in them tomorrow. Watch this space for a race report and more thorough review.

I took them out yesterday for a test run and I liked them. Very springy and cushioned. I just wish the heel was more snug. The latest model, the “Vaporfly Next %” has a snugger heel, but it comes with a lower drop and that’s not good for my Achilles. If they work in the 5K, I’ll try them in a 10k, and all the way up. If they aren’t going to work for me, better to find out now.

Back to my original dilemma: will I feel less satisfaction from setting a new PR by wearing these shoes? No. I’ve accepted that the Nike Vaporfly 4% is one of the most popular racing shoes today, and I’m keeping up with the times. Literally.
at 8:38 AM