I PR'ed My First Masters Race

I really don't like to give away the punchline in the blog post title, but yes, I set a PR in my first race in my 40's.

I ran my 13th consecutive Virginia Run Turkey Trot this morning. I know this course like the back of my hand, and I think that knowing it is the key to running a fast race. The course profile is gently rolling hills, but if you know how to tackle it, it can be faster than many flat courses. 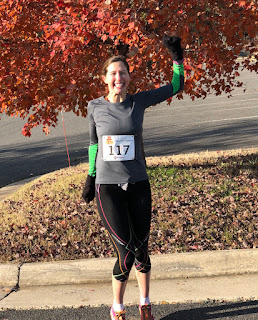 Up until today, I wasn't particularly happy with my fall racing season. The ten-miler I ran in October was well off my goal, and the Richmond half marathon was a struggle. In fact, I hadn't set a PR in any distance since January of this year, when I ran the Houston Half Marathon. Although, in many ways, I consider the Boston Marathon to be my PR because running a 3:26 in intense rain, wind, and cold on a difficult course is definitely a more impressive performance than running a 3:21 on a flat course in ideal conditions.

When the forecast came out for this turkey trot, I was admittedly frustrated. 12-14 mph sustained winds, which meant running directly into the wind for the first half of the race. And at 25 degrees, it would feel biting. As I mentioned in my last blog post, the weather has been my enemy this year. But when I woke up, I was pleasantly surprised that it was 30 degrees! Those 5 degrees of extra warmth meant I could wear a lighter top and be more comfortable. The wind, however, would still be a factor.

I figured I would go for a PR, but not necessarily sub-20. I wasn't going to rule it out, but I have learned that "going for sub-20" puts too much pressure on me, so that wasn't really the goal today. Plus, I am in the midst of marathon training, and ran 79 miles last week. I knew my legs wouldn't be fresh, however I still believed I could PR.

Before the Race
I'm going to include some details here that are mainly for my own benefit, so when I come back and read this post next year, I will know what worked. I had salmon, asparagus, and plain pasta for dinner last night. I ate a turkey/avocado sandwich for lunch and had a cookie for dessert. I slept for about 7 hours, and woke up once for 30 minutes. In the morning, I had an english muffin with peanut butter at 5:45, along with about 8 oz of water.

Since it was going to be a little warmer than forecast, I spent some time figuring out what shirt I would wear and ultimately settled on a t-shirt that was made of slightly thicker material than the standard running t-shirt. It was the Slim Sleeves shirt by rabbit. I likes that the sleeves were tightly fitted and the material seemed to be the right weight.

Greg and I left the house at 7:03 (yes, I remember this) and we arrived at the church parking lot at 7:15. At that point, I drank half a serving of Generation UCAN. We then used the church bathroom (they are always so generous letting us use it) and began the warm up at 7:30. My Garmin shut down and re-started during the warm-up, which was concerning. So I reminded myself that if it did that in the race it was okay. I do not need a functioning Garmin to race a 5K. We warmed up for 17 minutes (2.1 miles) and then I stashed my jacket on a fence near the start line.

We lined up toward the front, since there are always so many kids at the very front that I have to weave through during the first half mile. About 1200 people run this race. It's a neighborhood Turkey Trot, which has been going on for 30 years now. There are typically a lot of fast high school and college students who you wouldn't see at most other local races. We lined up at 7:52 and the time ticked by so slowly. I jogged in place a bit to stay warm. The start was really weird. The announcer gave a speech about the charity and the sponsors, but didn't say "ready set go". Instead, this weird ambulance sounding thing went off (which hadn't been used in any of the previous 12 races) and everyone was confused for a second, but then we were off.

Mile 1
I had a pacing strategy and a mental strategy for this race. I was going to run a strong first mile, but without worrying too much about the pace on my watch. It was an uphill mile directly into the headwind so I focused on relaxing and easing into a rhythm. I wasn't trying to hit any particular pace. My goal was to relax, run strong, not spend too much effort weaving, and get to the first mile marker feeling good. Given that it was somewhat crowded at the beginning, I tried drafting briefly, but people's paces kept changing so there wasn't really a pack to stay behind. Finally, my watch beeped 6:33 for the first mile.

Mile 2
Mentally, I had achieved my first goal, so now the next goal was to continue on in that same fashion, and make it about a quarter mile to the first turn into a neighborhood. I knew once we turned, I would be done with the headwind for good. Sure enough, the turn came, and there was still a bit of a headwind, until we made another turn and the wind was gone. But now it was time for the biggest hill of the race. Every year this hill seems to get less and less steep, which is awesome. I don't even think I slowed down at all on it this year. Possibly because I had a tailwind assisting me. My plan was for this mile to be about 4-5 seconds faster than the first mile, and without really trying to hit a particular pace, I naturally logged 6:26 for mile 2. I noticed that the mile markers were misplaced this year. I auto-lap my Garmin during races so I don't have to worry about it, and it's a good thing too because the markers were misplaced by about a tenth of a mile. 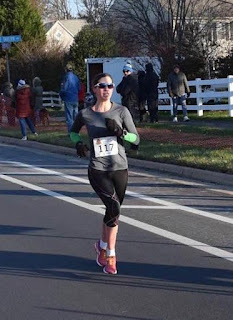 I think this course is mentally easier than a flat out-and-back like the Hains Point courses. If you know the course well, you can break it up into small bits and take them on one at a time. I reached the top of the hill and then focused on really fast turnover to take advantage of the downhill. Now it was time for the quarter-mile stretch that always seems longer than it should to get back out onto the main road. This little portion of the course is uphill and it's annoying because I just want to be back on the main road with the finish line straight ahead. So I told myself to just get through that short part, and then the turn would come. I glanced down at my Garmin as I made the final turn onto the main road with about 0.7 left to go. It read 6:21, so I knew I was executing well, and I could make that last mile sub 6:20, which is what I had planned. I gunned it really, really hard, and logged 6:18 for the final mile.

After the Race
I finished, and I knew Greg would be a few minutes behind me because he was running it at an easy pace. My watch read 20:01, and I was dying to know if I had officially broken 20, because I always stop my watch a few seconds after crossing. I kept walking until I reached a nearby neighborhood. And then, it was time for. . . ANOTHER WORKOUT! Even though I had just PR'ed my 5K, there was still marathon training to be done! My coach wanted me to recover from the race for about five minutes and then run 4 x 400m with 3-minute recoveries.

Greg knew where I would be and he planned to meet me there with my jacket. So, I started doing these intervals and the first one felt pretty good. I hadn't allowed myself to become stiff, so I ran 1:35 (6:21 pace). The next one came in at 1:33 (6:12 pace), and then I saw Greg on my recovery jog. I ran the third one in 1:30 (6:03 pace) and was really ready to be done at that point. All I could think about was my time and if I had broken 20. I was going to stop out of impatience but I told myself I'd have better Karma if I did the last one. I did so in 1:31, and then my final recovery jog.

There was a line to check the computers for the results. And the computers weren't functioning properly at first. I was in so much suspense. At last, we were able to pull up the results and I found my name and it said 19:58! I screamed! I couldn't believe it. I was sure it would be 20:00 since that's just my luck, but I was elated. I think the people around me thought I was a freak.

I shed a few tears of joy, as this has been a goal of mine for two years and I have worked so hard and run so many 5Ks in pursuit of this goal. And to do it as my first race in my 40's makes it extra special. And to do it during marathon training makes it even more impressive to me! We will have PR cake tomorrow night.

I think my key to success today was having a really solid race plan for pacing and for how I would break the race into chunks. And also not pressuring myself to run sub-20. The windy forecast actually relieved some of the pressure, because if the conditions had been perfect, then I would have expected more out of myself. As for placing, I came in as the 4th female.

I'm so happy! I remember always thinking how fast those 19:xx people were. And now, I am one of them.

Turkey Trot history for the years I have data 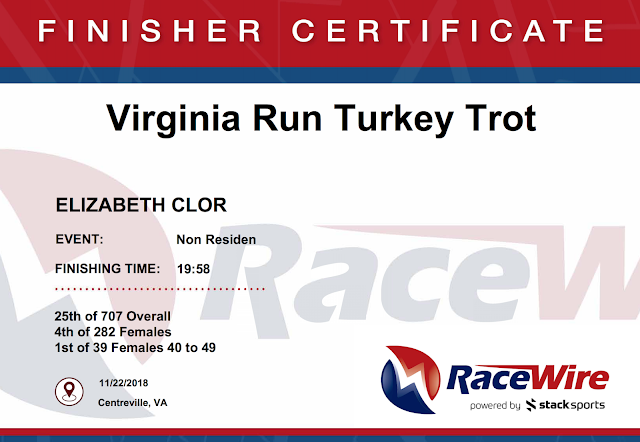