Getting There: Recovery from post-viral syndrome

I haven't provided an update on my running (or lack thereof) in a few weeks, so here it is.

I came down with a virus on May 31st, so it's now been 6.5 weeks since the onset of this whole thing. A few days after getting sick, I realized that it could take me a long time to recover, because I had a similar illness in 2012 and 2016. Both occurred in the summertime. Both were the likely result of too much physical exertion in the heat. Being the planner that I am, I made a comeback strategy, which I outlined in a previous blog. Below is the same plan, with actual dates: 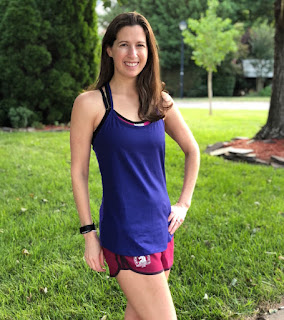 All of this worked out fine, but I think I made a mistake by increasing my running volume by too much too soon. For my first run back, I ran 11 minutes non stop. Two days later, I ran 25 minutes nonstop. And the next day, I ran 27 minutes, plus a 2-mile walk. Apparently this was too much too soon, because by Sunday July 8th, I felt tired most of the day and didn't do any running or walking.

This frustrated me greatly because I had thought the illness was completely behind me. But then I chose to look on the positive side, remembering that my doctor quoted a 6-8 week recovery time, and I wasn't quite yet at 6 weeks. I also remembered that recovery is not linear, and just because I felt bad last Sunday, didn't mean I wasn't progressing overall.

On Monday, I did a short walk (1.5 miles) with two 3-minute jogs thrown in, and decided that run/walking would be a better way to get back into it instead of trying to run for 15-20 minutes at a time. I still didn't feel all that great, but I remembered how walking in the earlier stages of my illness made me feel better. I went to work, but came home feeling so exhausted that I got into bed at 7:00, immediately following dinner.

On Tuesday morning, I woke up feeling totally wiped out, even though I had slept for 9 straight hours. I did not run or walk. I debated going to work. It was a difficult morning for me emotionally because it was a reminder that I was not done with this illness yet. But, after taking a shower and getting dressed for work, I felt better. And by noon, I was feeling almost back to normal. What a relief!

Because of this setback, I decided that I needed to stop running and return to walking only. I did that and felt energized for the next few days, so on Friday, I did 4 x (4 minutes walk, 4 minutes jog). I took the jogs very easy, all at a 10:00 pace or slower. By contrast, when I had tried to run initially the week prior, I was running in the low 9's, and not taking walk breaks. This 32-minute "workout" left me feeling good, so I repeated it yesterday, and again today. There's no need to increase the distance/time every day. It's better to find something that works, stick with it for a short while, and then make a very small increase. It's all about finding the right balance between giving the body enough stimulation to continue to recover, but not so much that it causes a strain.

If I continue to feel good, I plan to run-walk for another week, with slight increases in the run time. I'm registered for a 5K one week from now, and it would be nice to jog the whole thing without taking walk breaks, but I am not going to do that if it's too hot or I don't feel ready. At the very least, I would like to run/walk it with Greg. Hopefully one week from now I will be blogging about how well the 5K went and how great it felt, regardless of the run/walk proportions!

Even though I've felt like my normal, healthy self for the past five days, I don't think I'm out of the danger zone. There's a small part of me that worries I will never be out of the danger zone and that running for an extended period of time will always cause extreme fatigue. My running career could be over. I don't believe this will happen, and I don't worry about it happening, but I realize it's a possibility, called Chronic Fatigue Syndrome. The difference between Chronic Fatigue and Post-viral Fatigue, is that Post-viral fatigue goes away.

In any event, I'm still very grateful that I'm healthy enough to go to the work and do the "everyday" things that I couldn't do during the first four weeks of illness. I have my life back now, all except for the running piece of it.