I registered for the Birthday Bash 5K several months ago before getting sick. I got sick on May 31st, didn't run at all for five weeks, and then slowly eased my way back into running through a gradual progression of run-walks.

This week, I was able to run/walk every day with progressively more running and less walking. I did this for about 30-35 minutes each day, and by the end of the week (yesterday) I felt confident in being able to run nonstop for a 5K, and not experience and adverse effects.

The tricky thing with recovering from this illness is that it's difficult to know how much is too much. Overdoing it will cause a setback until I am 100% recovered and out of the woods. I may feel completely fine while running, only to realize the next day that it was too much. That's why I have been very gradually testing the waters and it seems as if I have finally reached 100% recovery and I won't need to worry about setbacks anymore. That said, I'm not going to start running 40+ mile weeks yet; I will continue with my gradual approach.

Before the Race
Because I planned to run this as an easy run with Greg, I was "out of sorts" with my normal pre-run routine. I forgot my sunglasses and sunscreen, so we had to go back for them. We later realized that Greg forgot his wallet. Thankfully I had a credit card attached to the back of my phone. When we went to pick up our packets, we learned that Greg had never actually registered, so he had to do so on site.

Once we pinned on our bibs, we headed for the starting area where we met up with our friends Allison and Cheryl. It was an unseasonably cool morning at 64 degrees and lowish humidity. Typically this race is 75+ degrees and I wouldn't be surprised if this was the coolest Birthday Bash in the history of the race. I was bummed that I wouldn't be able to take advantage of the weather and race full-out, but I know I'll have plenty of cool races in the coming months. Plus, if it had been really warm, I would have worried about my body rebelling since heat running seems to be what weakened my immune system in the first place. We chatted for a bit and then the race started.

Mile 1
The plan was to simply run our easy pace and maintain it for the duration of the race. Greg and I didn't warm up so we used the first mile to establish a rhythm. The first mile is mostly downhill so I wasn't too surprised that our first mile clocked in at 8:42. 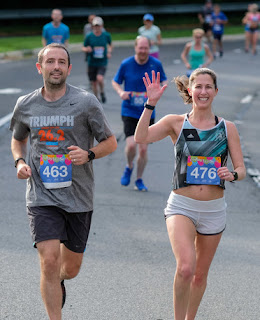 At this point, I observed that the effort level was still light, but any harder and I would have classified it as medium. Although we weren't gasping for air like those around us, we were definitely working and it felt good. Occasionally the sun would poke out from behind the clouds which made things harder, but then it wouldn't be long before the cloud cover returned. We held steady and logged our second mile in 8:41

Mile 3
The last mile of this race is almost entirely uphill. I expected that we would slow down here, but maintaining the pace didn't feel like a strain. We even passed a few people, which seemed to give me more adrenaline and energy. We were having a blast and I was so thankful to be out there and feeling good. We ran the third mile in 8:33.

The last bit
Since I was feeling good, I thought it would be fun to pick it up a bit for the last stretch. Cheryl and Allison cheered us in and I wore a huge smile on my face. According to our Garmins, we ran a pace of 7:52 for 0.17 miles. Pretty exciting! After writing this, I just realized that my Boston Marathon pace was faster. . . gulp! I'll get back there. 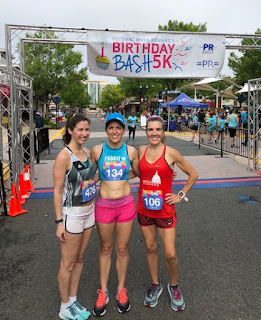 Cheryl and Allison (who both ran very speedy races) ran a few cool down miles while Greg and I changed into dry clothes in the car. The plan was to meet them at a nearby restaurant for brunch, but when we tried to leave, the car wouldn't start. We ended up getting a jump start from a friendly runner nearby, and then driving the car to a mechanic to get the battery replaced before having brunch. Finally the four of us enjoyed a celebratory meal at an outside table. I can't believe it was still cool enough to be eating outdoors!

I'm absolutely thrilled that I was able to participate in this race and feel good for the duration of it. Better yet, 24 hours later, I am still feeling good and without any lingering fatigue or dizziness, which were my most common symptoms. I'm taking this as a sign that I am fully recovered and that I don't have to be fearful of relapse. Phew!

In four weeks, Cheryl and Allison are running the Leesburg 5K/20K. I plan to participate in that event too, but not at race effort. I have given up all-out racing in the summer, but it's fun to be part of a running event with friends. My next race-effort race will be in late September.
at 7:30 AM