There's a zebra named Zee who lives about 90 minutes outside of New Orleans. Not at a a zoo, but at a house. I discovered this zebra just over a year ago on Instagram and quickly made friends with her 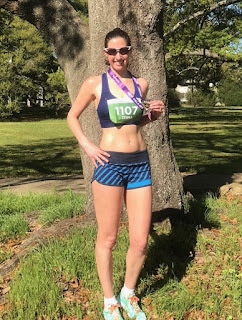 owners. Greg and I received an open invitation to visit any time we wanted, so we figured, what better time than the weekend of the Rock 'n' Roll New Orleans Marathon?

This race had been on my bucket list for years and Greg had never been to New Orleans. We decided that I would run the half as a tune-up for Boston and Greg would run the full. When we registered, I knew there was the potential for this race to be warm, but the average overnight low for early March is  50 degrees, so I thought that could still be manageable. Plus, I don't like ruling out races just because they could be warm. New Orleans is a fun city and with a zebra nearby, this seemed like a win-win.

Before the Race
Greg and I flew into New Orleans on Saturday morning, aided by a very strong tailwind out of the north east. The wind storm back home actually worked in our favor! Upon arrival, we had Po' Boys for lunch and then proceeded to the expo. At the expo, Greg needed to buy two gels. But much to our surprise, the expo did not sell gels! He uses the Gu brand, and they didn't have that; only one gel was for sale and we had never heard of it. We looked at the course map to see what types of gels would be offered on the course, and it didn't say. We could tell there would be one gel station at mile 9, but that wasn't sufficient.

When we got back to our hotel, I went on the Gu website, found the nearest dealer, and then walked to a nearby bike shop while Greg rested his legs. Mission accomplished! I'm essentially writing this as a pubic service announcement: do not count on Rock 'n' Roll race expos to sell the last-minute items you need. The expo had a large Brooks display but it was slim pickings aside from that.

For dinner, we met our friends Anna and Amber at a seafood restaurant. I had waited until the weekend before to make dinner reservations and all the pasta places were fully booked. But the seafood place, GW Fins, was delicious and they had plenty of options. I had salmon with cornbread and a side of sweet potatoes. Plus a beet salad. Plus a dessert. I might have gone overboard with the yummy New Orleans food. I should also mention the Pralines I had. Yum!!!

After dinner, we walked down Bourbon street and it was really something else. It was like a huge party with music and people doing all sorts of crazy things.

Greg and I went to bed at 8:00 (which was 9:00 east coast time) and slept relatively well. I had like six dreams in a row about missing the start of the race, and was relieved to wake up to find it was only 4:15. I had my typical banana and bagel with peanut butter. 30 minutes prior to the race I drank a packet of Generation UCAN. If I do this, I do not need any fuel during the race.

We made our way to the start line, which was just a few blocks from our hotel and I warmed up for about a mile. The race started at 7:30, which I didn't understand. They had a 10K that started at 7:00, and I would have loved to start half an hour earlier. Houston started at 7:00. Other Rock 'n' Roll races start at 7:00, so why not this one? It mattered because instead of 30 minutes running in 57 degree temperatures, we had 30 minutes of running in 67 degree temperatures at the end of the race. Just some feedback in case the race director is reading this!

Depending on which app we looked at, it was anywhere from 55 to 58 degrees at the start. There was not a cloud in the sky and there was a bit of wind to boot. When I ran Boston, it was 70 degrees at the start and I held up really well for the first 13 miles, so I just remembered that. If the weather had been cooler, I would have tried to run a 6:55 pace and PR by about a minute. But since it was warm, I decided to go out at a 7:00-7:05 pace. This is really not much of a pace adjustment at all, but I wanted to give myself the opportunity to PR, on the off chance that the heat didn't impact me.

Miles 1-4
The race started and everything felt good. The first mile ticked off at 7:04 and it didn't feel hard at all. Yay. Same with the second mile. It felt relatively easy and my split was 7:02. The third mile was also quite pleasant in 7:04. But something happened shortly after mile marker 3. My legs suddenly felt heavy. My energy was still good but my legs were now tired and didn't have any pep. I thought this could be the first sign of the heat affecting me, so I made the executive decision to back off. I decided I would back off to a pace of 7:15, hold that until mile 10, and then run faster at the end if I could. On the one hand, I didn't want to "give up" so early, but on the other hand, I knew that if I didn't make an adjustment soon, I would pay for it later.

Miles 5-8
People started to pass me, and even though I didn't like that, I knew I was doing what I could. Amber passed me during the 5th mile, looking really strong and peppy. My friend Aaron also passed me. I was pouring water on myself like crazy, but made sure not to over-hydrate like I had done in previous races.

When I got to mile six, I realized the rest of the race would be a struggle. I wasn't able to hold onto 7:15 and I doubted my ability to even finish the race without walking. But I promised myself that no matter what, I would not walk. I would keep the effort level the same for as long as possible and just push, push, push through it. 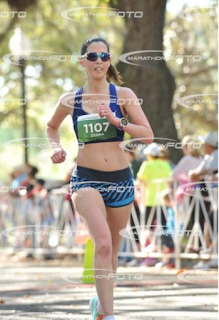 At this point, my main goal was not to have Greg catch up to me. I knew that he'd be running the first half of the race at a pace of 7:55, and I didn't want him to catch me and see me walking. The crazy and amazing thing is that I felt like I was running so slowly and I was in so much pain, and yet I was able to hold onto my 7:30's. Usually when I "bonk" I have to slow down into the 9's. This is why I thought Greg could potentially catch me.

I started to get a cramp in my stomach and I felt anything but strong. I just kept plodding away, determined not to let Greg catch me. The sun was so strong and there were no trees or cloud cover. We even had a bit of a headwind to contend with from miles 7-10.

Whenever I looked at my Garmin, I kept expecting to see 8:30's or something but I was actually running in the 7:30's. I had no clue how I was maintaining that pace because I felt like I was on the verge of walking for the entire last five miles of the race. Maybe it was all of those 90-minute runs my coach had me do at a pace of 7:30. Those runs weren't very hard. So the good news is that I can hold the 7:30s for a long time, in the heat. If Boston is hot, hopefully I can run in the 7:30's there too! Although I probably would start off slower.

Even during the last mile, I kept thinking that at any moment my body would just give out and I'd be walking. Or that I would look down at my Garmin and see a 9:00 pace. It was kind of surreal to feel like I was running a snail's pace but still be in the 7:30's. These thoughts kept me going all the way to the finish line. I did not have a final kick, but I was very steady. 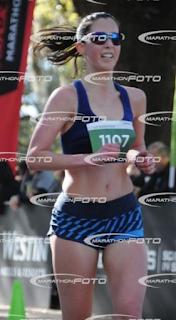 I clocked in at 1:37:40, and was pleased with that. A "hot weather" PR for sure! My previous fastest half marathon in weather above 50 degrees was 1:43 at the Walt Disney World Half in 2013. Immediately after finishing I found a table to lean on. The volunteers asked me if I was okay and I nodded yes, unable to speak. I walked about 100 feet and saw Amber waiting for Anna and me. She asked me how I felt and I was still not able to talk. Instead, I walked to a nearby garbage bin and vomited. A lot! I couldn't believe it. I didn't really feel nauseous while running, but I did have a mild stomach cramp.

I don't typically throw up after races; I've only done it one other time. Ironically, the only other time I did it was when I ran a 1:37 half in Columbus, but that was in the low 30s. I guess my body likes to throw up after exactly one hour and 37 minutes of running and then stopping. Ha! It felt good to vomit and I actually felt like this validated the struggle I was in for the second half of the race. My #1 goal was to push as hard as I could for as long as I could, and I know I did that. In retrospect, I would have started out at that 7:15 pace instead of waiting until mile 4, but these are things you can never know at the start line.

Anna finished and the three of us went to take photos in the park. As we are all avid Instagrammers, the photos were super important. Afterwards, I took a shuttle bus back to my hotel. This ended up taking about 20 minutes so I barely had time to shower and head back out to the finish line to catch Greg. I took an Uber to the finish line and just as the car was about to let me out, I got a notification that Greg had finished. Hooray! But since I had expected to watch him finish, I had no idea how to find him. Ultimately he borrowed someone's cell phone and called me and we met up. Greg ran a 3:27:34, which is a PR for him by over a minute! That's a huge accomplishment, considering temperatures were in the 70's by the end of the full marathon.

Final Thoughts and Takeaways
Am I disappointed that I didn't PR? Nope. Today was not the day for it, at least not for me. I've historically struggled when racing long distances in the heat, especially on sunny days like today. For example, I was 20 minutes off of my goal when I ran Boston in 2016. Most runners seemed to be about 10 minutes of their goals. At least I think I managed my hydration correctly this time: I didn't over hydrate during the race or beforehand, and I had a good electrolyte balance. At least I did before vomiting!


I highly recommend the Rock 'n' Roll New Orleans Half Marathon, I just wish it had an earlier start time and that the expo sold gels. Tomorrow Greg and I take a road trip to see Zee! It doesn't get much better than this. 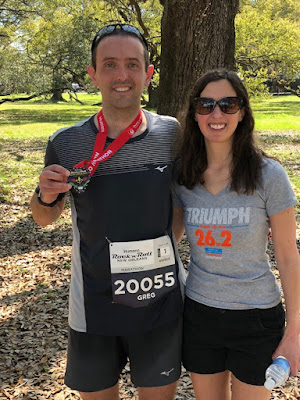