My training for the Boston Marathon isn't over yet, I have one more hard week ahead of me before I start to taper. But as this cycle draws to a close, I want to highlight some discoveries I've made along the way. I've been able to safely run significantly higher volume and more difficult workouts than ever before (76 miles last week, 77 miles this week) and I've felt great the whole way.

1. The cold weather is my friend.
Even though running in cold isn't always fun (particularly when you throw in rain, snow, and wind) but it agrees with me. When I was training for the Indianapolis Monumental Marathon, the summer heat and humidity lasted all the way through October and I think it took a toll on me, physically and mentally. 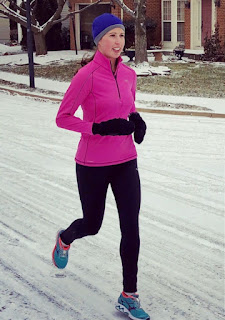 At this point in my cycle last time, I was craving my taper and was mentally ready to be done with the hard work. Now, after having run a series of higher-mileage and higher intensity weeks, I am not craving a taper and I'm ready to take on the final week of hard work. I'm now three weeks out from the Boston Marathon, and I ran a 22-mile training run yesterday at an average pace of 7:59. It wasn't easy but everything felt great during the run and afterwards. When I was three weeks out from Indianapolis, I also ran 22 miles, but it was in the 60s and humid. I averaged a pace of 8:29 and was totally spent. My Achilles was in bad shape and I ended up taking a few days off.

By the time the marathon arrived last fall, I just didn't feel good. My body wasn't up to the task. I have several theories on why, but my strongest one is that so much training in the heat tore me down over time. My two bouts with mono were also the result of running at high intensities in the heat. With this cold weather, I was able to run 15 miles at a faster pace last weekend than my half marathon three weeks ago in the heat.

2. The training is worth it, period.
Someone recently commented on my Instagram that it would "all be worth it" on race day. When I saw that comment I had a mini revelation-- it was already all worth it. Sure I would love to run a fast time in Boston, but if I don't, this training cycle has been worth every hour I've logged. I enjoy waking up in the morning with an intimidating workout on the schedule and seeing what I can do. I love that my coach is really testing my limits and every week I get to discover what I am capable of.

My coach sends me four weeks of training at a time. When I received the most recent four-week block, I thought that he'd gone a bit crazy. High volume, most all long runs with fast paces plus two hard workouts a week. "Easy" runs at 7:45 pace for 90 minutes the day after hard tempo runs. Being able to juggle all of this running with a full-time job, a long commute, and eating healthy has been an accomplishment. So if, for some reason, Boston doesn't go well and I don't PR, at least I will know that I have progressed to the next level. I plan to give it everything I have in Boston, which is all I can ever really ask of myself. All of that being said, I'm really hoping that the Boston weather isn't hot again!

3. This cycle is the exception, not the rule.
My sports psychologist always told me that PRs at my level were the exception, not the rule. I look at training cycles the same way. Typically you would expect to miss at least one run on the schedule (probably more) and not be able to complete everything as prescribed. Particularly if you are trying to run a string of intense workouts that you've never done before. But with the exception of bailing on a few 1600 meter repeats because of an unbearably windy track, I have been able to run everything as prescribed, and sometimes a few seconds per mile faster.

I need to make sure I don't look at this training cycle as the new standard, because that would be my perfectionism rearing its ugly head. I'm approaching 40 and I might not be able to handle this load in the future. And, aside from having cold weather, I'm not exactly sure how I've been able to run all of this volume and all of these crazy workouts and still feel energized. But. . . I'll take it!

4. Recovery doesn't have to be fancy.
When my coach tells me to "recover well" after a hard run, I interpret that as eat healthy food, drink plenty of water, get quality sleep, and use the foam roller. On top of that, I take a few Epsom salt baths each week and get a massage. If it ain't broke, don't fix it, so I am hesitant to try recovery tools that I am not familiar with. Ironically, though, TheraGun reached out to me asking me to test out their G2PRO massage product, and I said yes. I've only had it for two days and so far I like it. I'll write a more extensive review once I've had more time with it. I probably won't use it too much before the marathon though because. . . if it ain't broke, don't fix it!

Here is a graph of my training since January 1st. According to my coach, marathon training didn't officially start until February, which is when the volume really picked up. I've now run for 72 days straight and I feel really good. It's taken four years of working with the same coach to get to this level and as I said above, I'm proud of this regardless of my race time. 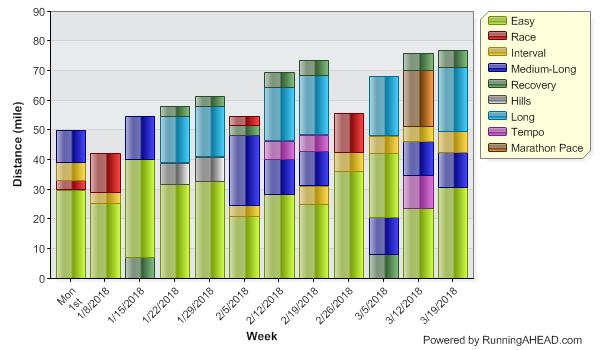 The highlight of this past week was my 22-mile long run, which I started out at 8:20, and progressed down to 7:40 by the end. I ran the hilliest route I could map out from my house and it was definitely a great training stimulus for my legs.

As I said earlier, my training cycle is not complete yet. If all goes according to plan, I should log another 77 miles next week. I'm looking forward to less severe winter weather and maybe I'll even get to wear shorts.
at 5:33 PM