Army Ten-Miler: Running in a Sauna

Needless to say, we approached record heat and humidity this morning here in DC. According to the Washington Post's Capital Weather Gang: Dew points are on the rise as a tropical air mass rushes through the region. Temperatures will be quite warm and uncomfortable. . . in the low 70s downtown with comparable dew point values. Warm record lows for Sunday are in jeopardy of being broken.

At several points throughout the week, I debated not racing. I had bailed on the Navy Air-Force half
marathon three weeks prior due to similar weather conditions, and not wanting to subject myself to a death march. I have a history of heat exhaustion and I've found that the heat and humidity seem to impact me more than the typical runner.

I ultimately decided to stick it out and try to make the best of it. I really only had one goal (aside from avoiding heat exhaustion), and that was to run my last mile faster than my first mile. Ideally, I would run negative splits and pass people during the second half. Instead of running by my watch, I would run by feel.  Before the forecast came out, I was thinking that I might be able to manage a 6:50 pace for 10 miles. But with the heat, the race ended up being all about the effort level, and not trying to test my fitness.

I slept particularly well during the week leading up to the race, and I could tell that my body was starting to recover from the past six weeks of hard training. My coach gave me a taper for this race, allowing my legs to regain their pep, and I took full advantage of it. As a result, my mileage for this week was only 52, compared to my typical 65+, but I think it was good for me to have a cutback week in terms of mileage. Knowing that my only goal would be to pace the race for a negative split and run a hard effort, the pressure to PR was non-existent.

Before the Race
My alarm woke me up at 5:30, which is atypical of race morning. Usually I am up in the 4:00 hour on my own because I am so excited about the race. I'll be honest-- I was not excited about racing in 76 degrees, which was the current temperature in DC according to Wunderground.

Greg and I had reserved a parking spot about one mile from the race start. We left the house a little later than we wanted to, and the drive took longer than expected, so we both started to get a little nervous. But thankfully, we found street parking on the way to our reserved garage spot, so we just took it. The "reserved" spot was actually the parking garage of a hotel, and I was worried there wouldn't be availability despite a reservation, due to the hotel being booked for the race. The street parking was free and easy. As we jogged to the start, we passed a hotel and used the bathroom. This was a lifesaver. We were already on the later side of things, and we didn't have time to wait in line for a porta potty.

We figured out our plan for meeting up after the race. Basically he was going to wait for me after the finish line chute and look for me as I walked through. He said that I should do the same for him if I finished first but I told him that was not going to happen. "It could happen," he said. "It is highly unlikely to happen," I replied, as I hadn't beat Greg in a race in over a year. "But if it does, I will look for you to finish."

It wasn't long before we reached the Pentagon, the starting point of the Army Ten Miler. There were 35,000 runners (more than run the Boston Marathon) and the announcer kept mentioning that it was the third largest 10-mile race in the world. We made our way to the first corral and it was packed. It was particularly warm in the corral with all the body heat and sweat radiating from the runners. Even on the hottest summer mornings, it wasn't 76 degrees! A typical summer morning in DC is around 70. This was almost comical.

Miles 1-4
The race started and it was very crowded. I decided that I would go with the flow and not waste energy weaving through people. I didn't have a target pace for the first mile, but my overall sentiment was that I'd be happy to run my goal marathon pace (7:25) for 10 miles in these difficult conditions. I thought that the crowd would thin out after a mile or two, but it didn't. In some cases I found myself behind people going much slower than I wanted to be, so I had no choice but to do some weaving.

Even though the Army Ten Miler has a wave start, with assigned corrals, it is not enforced. I passed quite a few people who probably weren't going any faster than a 10:00 pace.

It started to rain during the third mile and it felt amazing! Unfortunately, it didn't last long and we were back into the sauna by mile 5.

I carried a water bottle with me for these first four miles, and then ditched it. I poured the majority of the water on myself as I ran, and only drank about 25% of it. This was fine, though, because I had hydrated really well on Friday and Saturday, and knew that I wouldn't need to drink a lot during the race itself. In the past, I have had a tendency to drink too much water in warm conditions, and I've learned that I actually don't need to drink a lot during races if I hydrate properly beforehand.

I decided to be very conservative and take these miles easy. Typically when I run a 10-mile race, I feel like I am putting out race effort starting at mile 2. But today, the first four miles felt comfortable-- definitely not race effort. And that was by design.

Miles 5-7
Once I had tossed my water bottle, I felt free to up the effort level and start passing people. And I did. Even though there were still loads of people, I noticed that things opened up substantially during the 5th mile, and I was able to pass people without a ton of weaving. I felt strong and my spirits were high. I actually felt much better than I did at the Cherry Blossom earlier in the year, when I felt "off" throughout most of the race.

With six miles left to go, I felt like I still wasn't out of the "danger" zone. I increased the effort, while making sure to save something for the end. I hit the halfway mark in 37:11. Now, I had a goal. I wanted to negative split, which meant sub-1:14:22. This seemed very doable. There was a bit of a hill after the halfway mark, which was tough, but once I got to the top I felt good again and ready to crush it. As I ran through the sixth mile, I remembered last year's race, when I was a spectator cheering for Greg. Even though it was ridiculously hot, I was thankful to be strong and healthy instead of recovering from mono.

Miles 8-10
After mile 7, we turned a corner and started running on a bridge. The bridge would span 2 miles and I was told it was the most difficult portion of the race. I had only run the Army Ten Miler once before,
and it was seven years ago, so I didn't have a great memory of the course. As I made the turn onto the bridge, I was shocked to see Greg not that far ahead. This came as a huge surprise. I expected him to be at least two minutes ahead of me. And I was catching up to him!
After a few minutes, I reached him and I said something to the effect of "It was unlikely." He let me know that his Garmin had stopped working, so he didn't know what pace he was running. He gave me a few words of encouragement but after about a minute I took off ahead. Initially I thought that something might have been wrong with him for me to have caught up, but he seemed fine physically and was able to talk to me.

The fact that I had passed Greg was a huge mental boost. Greg's 10-mile PR is 1:07! And he just ran a 1:32 half marathon in the heat three weeks prior. And then the passing continued. I passed, and passed, and passed! I thought about the RunPix that races sometimes offer that show you how many people you passed and how many people passed you during the second half of the race. Cherry Blossom had those, and I hoped that this race would too. I was a passing machine!

The bridge was tough, but I felt great. I was having fun, enjoying the race atmosphere, and feeling giddy that I was actually negative splitting a 10-miler in 76 degrees. And finally I was able to put out true race effort without worrying about bonking. With just three miles left to go and feeling great, I knew I was in the clear.

The finish
I crossed the finish line feeling like a million dollars and the announcer called out my name. And I didn't double over with my hands on my knees like I typically do. I felt so good! I couldn't believe I
ran a 6:53 final mile when it was 76 degrees and humid. And I didn't have to kill myself to do it. No black spots. No dehydration. No dizziness.

Greg appeared shortly after, which was a relief. After exchanging race stories, we did a cool down jog back to the car. A few hours later I heard that they re-routed the course at some point after we finished due to the adverse weather conditions. Apparently there were quite a few runners collapsing. As mentioned above, this was record-breaking heat and humidity.

I don't have my official time yet, and because they downgraded this to a "recreational run" for the runners who finished after they re-routed the course, none of the results will be posted until tomorrow. I'll come back and update with my official time tomorrow. My watch said 1:13:10. I'm less curious about my time than how I ranked in my age group. This may be the first hot race where I was actually more competitive instead of less competitive.

Final Thoughts
Since both of my tune-up races were in abnormally hot weather, I figured that the weather gods really wanted me to run a hot race. And if I didn't pay my dues now, I would have to on marathon day. So hopefully I have satisfied the requirement for a long hot race and it will be cold and overcast in Indianapolis in four weeks. I'm definitely glad I didn't bail on this race. Here are my final thoughts.

I wore the Adidas Tempo for the first time in a race, and I was very pleased with how they felt. They are a great replacement for the Mizuno Wave Elixir and Mizuno Wave Sayonara.

I'm looking forward to recovering from this race, having two more hard weeks of training, and then tapering for Indianapolis Monumental. 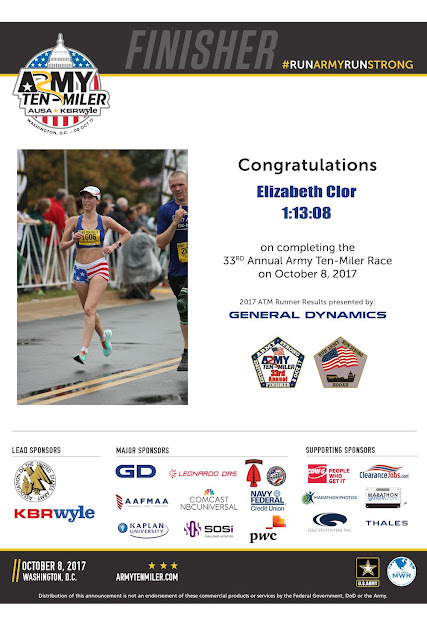