Listening to Your Body Actually Works

Earlier this week, I wrote a post about my Achilles tendonitis and how I decided to take some time off to allow it to heal. Of course, this was not ideal timing at all, as I was planning to run one more 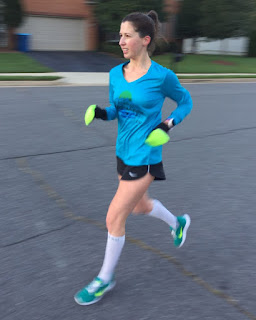 high-mileage week before tapering for the Indianapolis Monumental Marathon. I know many runners prefer a three week taper, but my coach traditionally gives me a two week taper, or even as short as 10 days, and I've found it works better for me. My training cycles tend to be shorter than average as well. I do some pre-marathon prep work, and then the intensity really ramps up 10 weeks before the marathon.

But given that my main objective is always to get to the start line healthy, I had to sacrifice half of this week to Achilles tendonitis. After Sunday's 30-minute recovery jog, I took Monday off as an unscheduled rest day. My Achilles ached for most of the day, even at rest. I was extremely relieved when I woke up on Tuesday morning and it had improved substantially. However, I didn't want to test my luck so I gave myself another unscheduled rest day.

Wednesday
I was checking in with my coach daily and letting him know how everything felt. On Wednesday morning, I woke up to an email from him that advised me to take yet another rest day. I was disappointed, but I didn't question his guidance. One of the main benefits of having a coach is that I don't have to make these decisions for myself-- I simply defer to his expertise. The Achilles had improved even more by Wednesday morning, but I still felt hints of it here and there. I also went to my sports chiropractor and a podiatrist on Wednesday. Both said it was okay for me to continue training and to run the marathon. My biggest fear was that it would rupture and I was assured that a rupture would not occur from distance running. They both agreed that it wouldn't clear up 100% until I really backed off the training, which will happen post-race.

Ironically, after I ran on Thursday morning my Achilles felt better than they had all week! I guess the run must have loosened them up and got the blood flowing. I was completely pain free during the run and after the run. And for the rest of the day I could barely feel anything at all! Even though it was hard to sacrifice three days of training, I knew I had made the right decision. I don't think that I lost any fitness, but I also didn't have the opportunity to make a final gain, which I'm okay with.

Friday
Finally, on Friday, I did the workout that was originally scheduled for Tuesday. And I had been itching to do this workout for weeks! I was excited that my coach put something on my schedule that I had never done before. And this would be my first workout in cool weather that could provide some indication of my fitness level. Of course, I would be nice and fresh for it, not having run hard since the 22-miler 6 days prior.

The workout was 3 times 3 miles at half marathon pace, with 4-minute recovery jogs in between. I don't really know what my half marathon pace is right now, but I made an educated guess of a 7:00/mile. I decided I would aim for that, starting off a little slower just in case I was being too ambitious. And that I would also run by feel, allowing myself to go faster if it felt okay. I warmed up for a little over two miles and started the workout. I can't even begin to say how amazing it felt to be running in cooler (50-degree) weather!

My first three miles were 7:10, 7:04, 6:52. They felt comfortable, and I knew I had hit the right effort level because I jogged my recovery at a pace of 9:06. If it had been really hard, I would have needed to jog my recovery closer to 10:30, like I do during track intervals.

The next three miles were 7:03, 6:58, 6:56. I was working hard, but everything still felt great. My legs were fresh. My Achilles were silent. And I had loads of energy thanks to a good night of sleep and my Generation UCAN, which I had consumed pre-run.

My did my 4-minute recovery jog at a pace of 9:19, and was ready to hammer it home. My splits were 7:04, 6:59, 6:56. I was so excited! I felt so strong and fast, and the workout didn't take as much out of me as some of the other ones this cycle. For example, I found the 20 x 1 minute hard, 1 minute easy + 20 x 30 seconds hard, 30 seconds easy to be much more challenging. With this half marathon pace workout, I settled in, cruised my way through it and felt awesome. Including warm up and cool down, my total mileage for the run was 13.

My average pace for the 9 miles was 7:00 and if you included the recovery jogs, I ran a total of 9.9 miles at an average pace of 7:11, which is faster than my Army Ten Miler pace! Cool weather makes a big difference. Thankfully, the Achilles did not flare up after the run and I continued to feel good throughout the day.

Saturday
This morning I ran 7.8 miles at an easy pace and everything still felt great. The fact that my legs had pep and didn't at all feel achy from the workout was also encouraging. Even still, my coach wants me to have two days of easy running between the half marathon pace run and my next long run, so I will be doing that on Monday morning before work. It's going to be dark, warmer and rushed afterwards, but at least I'm not injured! In my last training cycle, I ran 20 miles two weekends out from the race. During the training cycle before that I ran 23 miles two weekends out. This training cycle I will only be running 16, but it is what it is. I know that one long (or shorter-than-long) run doesn't make or break a cycle.

I've worked hard this training cycle, although it's been frustrating because of the weather. As soon as it became consistently cool, I had to take three days off due to this injury. I haven't had weekly doses of confidence-boosting runs like I have in previous cycles, but I've had two solid workouts (including the one above) that have indicated that I am in the best shape of my life. The Army Ten Miler was a confidence booster in terms of execution, so a combination of race execution and fitness should lead to great things on November 4th.