With the Indianapolis Monumental Marathon less than three weeks away, my only goal is to get to the start line healthy. I am writing this not so much for my blog readers, but more to reinforce it in my own mind. In fact, the purpose of my blog as a whole isn't to write for others, but rather to keep a personal record of my running journey. I find it useful to look back on previous race reports as well as descriptions of illness and injury. More importantly, I use my writing as a way to solidify my thoughts and find clarity. Most of my readers probably don't care about my exact placement in a race or what distance my Garmin reported. But those details and that level of analysis is interesting to me, so I include it. 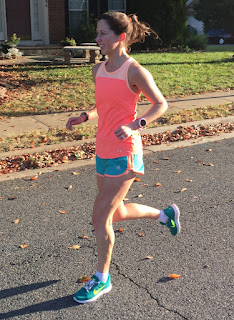 Back to the purpose of this particular post-- my Achilles tendons. I've been dealing with stiffness and aches post-run since the middle of July on both feet. The stiffness is at the point of insertion at the bottom of the back of the heel. I think it was caused by wearing the Nike Zoom Elite, which has an 8mm heel-to-toe ratio as opposed to 10+ mm, which I am accustomed to. I have limited ankle mobility, so those two millimeters made a difference, particularly since I only wore the shoe during intense 5K speed workouts. That must have caused an additional strain that my tendons weren't used to. I stopped wearing the shoes in early August, but it was too late at that point. It got progressively worse through early September, when I made an appointment to see my sports chiropractor. He gave me exercises to do, and they worked. My Achilles tendons started to improve over the next several weeks. At one point, the pain was completely gone for almost an entire week. I kept up with my exercises, but the pain started to get worse again after the Army 10-Miler.

On Monday of last week, I went for a 70-minute recovery run and while I could feel some minor irritation in my Achilles, but nothing too alarming. The next few days were easy running and I was recovering well from the race. On Thursday, I ran a workout of 20 x (1 minute hard, 1 minute easy) followed by 20 x (30 seconds hard, 30 seconds easy). My sports chiropractor had warned me that short sprints were the worst thing for my Achilles, but I proceeded with the workout anyway because everything had been feeling fine. I made it through the workout pain-free, and I felt pretty good afterwards too. I was actually encouraged because if I could sprint for a full hour without having my Achilles hurt, then I must be in the clear!

On Friday I ran for 70 minutes at an easy pace, and then on Saturday it was time for my 22-miler. I heated the area around my Achilles with a heating pad before starting the run to loosen them up. The run ended up being more difficult than expected. I've run 22-milers in previous cycles and all of them had felt better than this one. This could be because it was 62 degrees and very humid on Saturday, as opposed to the cooler, less humid conditions I've had for my other 22-milers. I felt fit and strong on the run, but I could tell the humidity was making me extra tired and my legs were also tired from the 60 minutes worth of on-and-off sprinting on Thursday.

I finished the run successfully, but once I was done, I was done. I was completely wiped, my legs were sore and achy, and my Achilles were not happy. I didn't really feel any pain in my Achilles during the run; if I had I would have stopped. I found it hard to walk around for the rest of the day, which was a contrast to my previous 22-milers. My prescribed run on Sunday was a 30-minute recovery run. My legs felt decent, and I told myself I would cut it short if my Achilles hurt. I took it slow (9:36 average pace) and as the run progressed my Achilles felt better and better. I was able to check the box on a 69 mile week. But something told me that I needed to take this Achilles thing more seriously.

It's now escalated to the point where I can feel a slight burning sensation even when I am at rest. And it never used to be this way. It used to only hurt when I got up from a chair, and only during the first few hours after a run.

I ultimately realized that I needed to stop running until my Achilles no longer hurt while at rest. An Achilles tendon could tear, and then I wouldn't be able to run (or walk) for months. It's better to be safe than sorry.

In an ideal world, this week would be my final week of high-mileage, intense marathon training. A two-week taper works best for me. But unfortunately I am starting the taper a week early, and resting completely. I think the elliptical would probably irritate it, and I just don't have the motivation to go pool running. I hate pool running and it's logistically difficult to do in the morning before work.

I'm going to take things one day at a time and hope for the best. I took today off and I will take
tomorrow off. I continue to do the exercises that my sports chiro gave me. I'd like to run my prescribed workout on Wednesday, but I'm not going to do it unless the Achilles dramatically improves between now and Wednesday morning. It's not worth the risk and I don't run through pain.

My sports psychologist said that injuries were like stop lights. Green means "train as normal - not to worry!" Yellow means "train with caution and be aware of how things feel" - which has been this entire training cycle. Now I'm at a red light and I won't be on the road again until it turns yellow.

How do I feel about all of this? It sucks, but I've accepted it. The tendons just need to hold out for three more weeks. They've held out this long! I'm also bummed that I haven't even gotten to experience the cool fall weather for a tough workout yet. All of my harder workouts have been in warm, humid conditions, and I think I could really see significant progress in cooler temps. I really want the opportunity to see what I can do and I don't want to be sitting on the sidelines on November 4th. This could be a flare up that goes away tomorrow, or it could persist until I've taken a more significant chunk of time off of running. If it's the latter, I probably will go pool running, which is a depressing thought.

The good news is that I haven't yet torn my Achilles. (If I had, I wouldn't be able to stand on my toes.) I'm going to a podiatrist on Wednesday just to make sure there isn't anything else going on. Better safe than sorry. I'd rather take some time off running with tendons that are intact than have to wear a boot or cast or get surgery or something. I also hate running in fear, and not really knowing if running is okay. The idea that I could be hurting myself it the worst feeling ever. I want to run the marathon on November 4th with pain-free heels, and not worried that something is going to snap mid-race. That's my priority and I will do whatever it takes to make that happen, even if it means losing some of my hard-earned fitness over the next few weeks.