This morning I ran the Semper Fi 5K in Washington, DC.  Over the past six weeks, I've been focused on increasing my speed at shorter distances and this race was one in a series of several that I had signed up for. 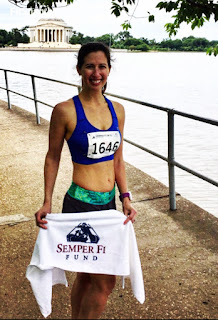 I had run this race last year, and even though the weather was miserable, the course itself was flast: flat and fast! In terms of a time goal, I was hoping to shave about 10 seconds off of my 20:38 PR from the GW Parkway Classic three weeks ago. I thought it would be a nice milestone to be in the lower half of the 20's.  This seemed like realistic goal because when I ran the Parkway Classic, I felt a bit "off," and for whatever reason, I didn't have the usual pep in my step that I typically do. This morning, I knew I would have to work really hard, but I thought I would be able to PR.

My goal for the year was to run a 20:17 5K in 2017, and I had been targeting my fall Turkey Trot as the race to do it. These spring/summer races would give me an opportunity to work on my pacing and the mental aspect of pushing really hard. I had also developed an entirely new respect for the distance. My 10K PR pace was only 4 seconds per mile slower than my 5K PR pace. I also started reading up more on 5Ks and coming to the realization that maybe I just couldn't push my body as hard as other people could. I could run for a long time at a hard pace, but trying to run even faster was a hurdle.

Being a data junkie, I conducted some predictive analytics prior to the race. Last year, I ran the Mother's Day 4-Miler followed by the Semper Fi 5K. I did the same thing this year. My average pace for the 4-Miler last year was 6:58 and my average pace for the 5K was 6:47. A difference of 11 seconds per mile. This year, I ran the Mother's Day 4-Miler at an average pace of 6:44, and subtracting 11 seconds per mile "predicted" a pace of 6:33. I realize this method isn't foolproof because you would need to look at as a percentage and not raw seconds. But the times are close enough that I was able to avoid more complicated math.

Of course there are all sorts of other considerations to keep in mind like the weather, the possibility of an "off" day, and the fact the races were only one week apart this year, but two weeks apart last year. Even still, I had a ballpark pace to target.

Speaking of being a data junkie, the company that I work for, MicroStrategy, had a team at this race. (The company sells enterprise analytics software.) It was awesome to see some of my co-workers before the race and get a team picture afterward.

Before the Race
Greg and I woke up, ate breakfast, and left the house at 6:50 for an 8:30 start time. We drove into the city, parked easily and jogged to the start line. I generally prefer to pick up my bibs in advance, but that hadn't been feasible for this race because packet pickup was in DC, which would have eaten up a good portion of our day. The line to get our bibs was quite long, but I figured it would probably move quickly. As I stood in line, I drank my UCAN while anxiously watching the time get later and later. The line wasn't moving.

They were assigning bib numbers through a computer system and I heard that they had lost their internet connection, which is why the line wasn't moving. There were actually four lines in total, and everyone had already registered; they were simply picking up their bib and shirt. Thankfully, they opened up more lines with more computers, the system seemed to be working again, and Greg and I were able to get our bib just in time to pin the bib on and warm up. I hate cutting things that close on race morning, and a huge sense of relief came over me once I had my bib in hand.

Greg and I warmed up for two miles and returned to the start line at 8:20. But nobody was lined up. We found our friends Allison and Cheryl, who told us that they had announced a delayed start. I was definitely annoyed by this, as were the other runners who had timed their nutrition and warm-ups for an 8:30 start, but there wasn't anything we could do. My plan was to get back on the course and run some strides, but before I knew it, the Marines had lined up and were doing something special with the flags. And it didn't feel right to run by them. Then the national anthem came, and it didn't feel right to be doing strides during that. So I settled on jogging in place at the start line and hoping that would keep my legs loose.

There was a man standing about 10 feet away from the start line on the other side who said in a conversational voice, "are you guys ready?" And a few seconds later he blew the horn. I had been ready, but expected there to be a countdown or something. Regardless, we were off!

Mile 1: 6:32
Because this course is flat, it's easy to get pulled out really quickly and typically I do. I tried my best to start at what felt like 5K pace would be. About halfway through the mile, I looked at my Garmin, which told me that I had averaged a pace of 6:40 from the start until now. This worried me a little. The effort felt hard, and I was trying to run that first mile at a pace of 6:32. I briefly considered that this might just be an off day, but then I quickly told myself to just push harder and try to run that 6:32 mile. And voila! I did! Often times in a race when I wish I was running faster, I try and I try and I just can't do it. But this morning, pushing a little harder in the second half of that first mile worked. During this mile, I also saw my friend, Cristina, cheering for me (and others) on the side of the course.

Mile 2: 6:35
Even though this mile is flat, I had slowed down substantially during it last year. So I told myself not to worry if I slowed down a little, as long as I maintained the effort level. At the turnaround, I could see that only two women were ahead of me. Unfortunately, though, I remembered the website said that only the "top 2" finishers would be recognized in the awards ceremony. I cruised through this mile and it wasn't nearly as painful as I remember it being last year. I should mention that last year, it was 50 degrees with very, very, VERY heavy rain. Torrential downpour. Those conditions were challenging, but today I was dealing with an abnormally wind-free, rain-free, sun-free day. It was a tad bit warm for me to call it the "race weather jackpot" of last weekend, but it was pretty darn close.

Mile 3: 6:25
Once I knew I had only a mile left to go, I started putting on the gas. As the mile progressed, I ran faster and faster and faster. It was as if the closer I got to the finish, the more motivated I became. It 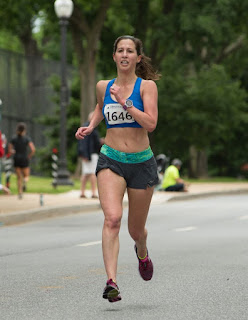 was extremely painful however. It felt as though someone were scooping out my guts, scoopful by scoopful. I had to constantly fill my brain with words of encouragement. During the last mile of a 5K, your brain is receiving LOTS of signals from your body to decrease the effort. The muscles, the heart, the lungs-- they are all telling the brain to stop running so hard. So that's why the mental strategy becomes so important. You have to fill your brain with messages that combat what the body is saying. I felt insanely strong during the last mile but it hurt so, so, so much.

I was absolutely exhausted as I walked toward Greg and then we watched for our friends to come in. I cheered loudly for them when they did, and they both looked strong and focused.

After the Race
Greg and I cooled down with one of my co-workers who I actually had just met at the race (it's a large company). And then we waited for the awards ceremony. I turns out that I was the third female finisher, but they only recognized the top two finishers overall. So instead I placed first in my age group, winning a certificate with photos of the 2015 race on it! And a towel with the race logo. It was actually nice to have a towel to wipe my face with!

Final Thoughts and Takeaways
The biggest takeaway from this race is that truly, some days you "have it" and some days you don't. When I ran the GW Parkway Classic 5K three weeks ago, I didn't have it. Even though I set a PR, I knew that I was in shape for a faster time. The fact that I was able to shave 21 seconds off of that time in just three weeks is telling. I should note that the GW Parkway course had two hills and a modest 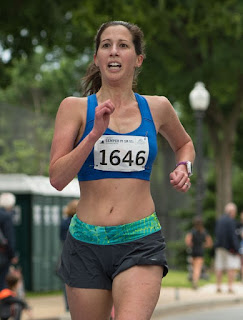 headwind, but nothing that would account for a 21-second difference. My sports psychologist told me many times that "performance is dynamic." I had seen this concept in action before, but never exactly like this. This lesson makes it easier to accept when you don't run a race as fast as you expected to. It may not be an indicator of fitness or how hard you pushed, it could just be an off day.

After reflecting on the first mile, I think it felt hard right out of the gate because my warm up had been over 20 minutes earlier. A 6:40 pace felt like a 6:20, and that was probably because my body had to adapt to moving again, unlike an ideally-timed warm up which ends 5-10 minutes before race start. Hopefully I won't encounter another late start anytime soon, but if I do, I should try to do an additional warm up so it won't feel as hard at the beginning.

I was confident in my ability to PR this morning, but I didn't think it would be by more than 10 seconds. Even though my special analytic formula predicted a 20:21, it would have been quite a leap from my 20:38. I honestly thought that the 20:17 would be a fall goal. And now, of course, I am eyeing a sub-20:00 for the Turkey Trot. That said, I will have just come off of a marathon training cycle, which doesn't necessarily correlate to a faster 5K.

Quick stats:
I'll be running a 5K three weeks from now, and I am not sure what my goal will be for that race. It's almost certain to be a scorcher, and the course is slightly more challenging. I'm really just enjoying doing new types of workouts and seeing how I handle them.