I started racing almost exactly 12 years ago. I had been a treadmill runner for years, but I didn't discover racing until my 5-year college reunion in 2005, which had a two-mile race. I was the first female finisher and I had a blast. One of the other runners suggested I run a 10K the following weekend in DC, so I did it and once again loved it. I ran my first half marathon in September of 2005 and my first marathon in May of 2006.

I've been training consistently ever since, with my longest breaks being my two bouts with mono in 2012 and again in 2016. Throughout all this time, I've never had as much of a "breakthrough" season as this spring. Typically runners see the most improvements when they first start out-- during the first 3-4 years of solid training. While I did see improvements over that time, I pretty much plateaued from about 2009-2013. PRs during that period were few and far between. I think it was a combination of dealing with injuries, and doing the same type of training runs over and over. I didn't have a personal coach who was focused on developing me and tailoring a plan to my needs.

The past two years have been a "running renaissance" for me, and the PRs have been fast and furious! I know that I will reach the law of diminishing returns and the PRs will become smaller and more rare. So I am savoring my PRs now. Literally savoring them:


Greg has been PRing like crazy too. I'm extremely grateful that we are both healthy and able to train together. With all of this PR celebrating going on, I have maintained my mindset of running being about so much more than PRs. I'm enjoying the training and putting in the hard work. When I set a PR, it's not so much the time I am happy with, but it's that I'm learning how to execute on race day, and that my training has been consistent.

Here's a more technical look at my racing history, since I started using my training log in 2008:

Now that my spring races are officially over, my plan is as follows:
Finally, here is a recap of this week's training.

Monday: 5.8 miles easy @ 8:38 average
This was the day after the 5K. My legs didn't feel sore or tired or anything! I credit that to the flat course and the fact that my legs are used to running fast from all the speed work I have been doing. I should mention that I got soaked on this run. I was completely drenched from the pouring rain.

Tuesday: 7 Hill Repeats
I asked my coach if he intended to put hill repeats just two days after a 5K. He responded yes, this was intentional to see how much my legs could handle. Ok!

Wednesday: 6.9 miles easy @ 8:40 average
Greg and I ran to the track to see if they were done with the maintenance that had prevented us from using it the week prior. Unfortunately, the track was still closed, so this meant we'd have to go to a different track for our upcoming workout.

Thursday: 5.3 miles easy @ 8:25 average
My plan had a track workout scheduled for this day, but the forecast was calling for thunderstorms so I figured I should stay close to home and do the track workout the following day. It poured heavily, and I was drenched again, but there ended up being no thunderstorms. 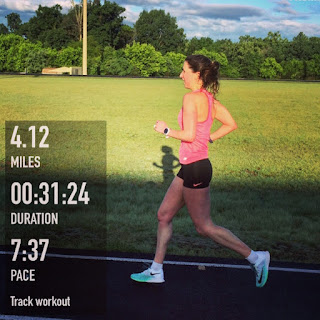 Greg and I drove to a different track, which we immediately discovered was the home of a gaggle Canada geese. About 30 geese were lounging around in the center of the track while we were warming up. As we started our workout, they decided that it was time to migrate to the outside of the track!

By the end of the workout the geese were safely gathered on the outside of the track. We cooled down for 1.3 miles, which included the jog back to the car.

Saturday: 14 miles @ 8:30 average
It took a while for this run to start feeling decent. The first three miles were a struggle in that my legs had no pep. My energy level was decent, thanks to taking a serving of UCAN before the run. The middle portion of the run felt okay, but not as good as previous long runs this spring. I became mentally exhausted during the last two miles and really wanted to call it quits at 12 miles. But I hung in there and was happy that I completed the full run. If I hadn't re-arranged the schedule on Thursday/Friday, my legs would have had an extra day to recover from the track workout. In the afternoon, I got a massage that was painful at times, but much needed.

Sunday: 3.4 miles recovery @ 8:46 average
Greg and I ran a different route than what we typically do for 30 minutes, and it ended with a huge hill. There's a monster of a hill very close to my house but we usually run in the opposite direction because it leads to more residential areas that are easier to run in. But since it was the Sunday of Memorial Day weekend, there were very few cars going the other way.

I'm on day 58 of a running streak, which makes me tied with my longest streak ever. If I run tomorrow, I will set a new streak PR.

I'm looking forward to another month of hard speed workouts and racing! The weather is certainly heating up, so I'm definitely not expecting any more PRs. Course PRs, however, are another story.
at 12:31 PM