Marathon Running: The Pressure to Succeed

In my book, Boston Bound, I address the idea of "expectations" when it comes to racing: what I expect from myself, what others expect from me, and how that impacts my performance. I've been thinking about this topic lately with the Myrtle Beach marathon just a few weeks away.

I used to approach marathons with an enormous amount of pressure on my shoulders. I would have put in all the hard work of training, and then expect a certain outcome. What's more, I would feel pressured by other people to run a particular time. Whether they were my friends, my teammates, my coach, people I knew through social media -- I didn't want to let them down. I had to prove to myself and to them that I could run a certain marathon time.

My biggest breakthrough, which occurred after about 15 months of working with a sports psychologist, was the realization that I actually didn't care about what other people thought about my marathon time and my running. It was a huge epiphany, and it was liberating. Up until that point in my life (which was almost 4 years ago) I was intensely focused on how other people saw me.

It was the summer of 2013. I was registered for the Chicago Marathon, which was a bucket list race. I had been sidelined with an injury for most of the summer, and would likely only have six weeks to train for the race, after a six week layoff. When contemplating if I should actually attempt to run Chicago, I realized that my desire to have that experience surpassed my desire to run a fast time. And if I ran a "slow" time, I simply wouldn't care about what other people thought. I wanted to run Chicago, and so I decided I would. And that I would run it to the best of my ability on the training I was able to fit in, and be happy with my effort.

Fast forward to 2017, and I have many more people "following" my running. More friends who run. More people reading this blog. More followers on Instagram and Twitter. And many of them, over the past month, have told me "you're going to kill this marathon" or "I can't wait to see what you do!" Far more eyes are on me now than have ever been before. But I don't feel the pressure I used to feel.

I'm not running this marathon for anyone other than myself. And while I have a time goal in mind, my focus over the past few months has been on the training. Being able to log 70+ mile weeks consistently is a big deal. I'm proud of how I've approached this cycle, particularly after dealing with a 3-month illness last summer. Even if I totally bonk at Myrtle Beach, it will in no way diminish the achievement of waking up every morning and getting out there. As long as I give 100% of myself on race day, then I'm satisfied.

I, do however, reserve the right to be disappointed in my time if something goes wrong. Disappointment is natural and as long as I keep an overall positive outlook, then I'll be fine. As March 4th draws closer, I plan to focus on executing the rest of my training plan, staying healthy (nutrition, hydration, sleep, recovery), and visualizing my race plan. That said, here's how my week shaped up.

Monday: 9.8 miles, including road intervals.
After having raced the For The Love of It 10K just two days prior, I wasn't sure if I was ready for a tough workout so soon. This workout was originally scheduled for Tuesday, but I knew I would be

I had actually run this workout about four weeks prior, but I didn't execute it all that well previously. I failed to look at my coach's notes to see that the 1-minute segments were supposed to be at "slightly faster than 5K effort" so previously I had run them at a pace of around 6:00. This made for very tired legs and snail-paced recovery jogs. So on Monday, I ran most the 1-minute segments at a pace of around 6:15, and I fared much better. The 30-second segments averaged about 5:55. So I was still quite fast, but not so much so that I killed my legs and had to run-walk the recovery jogs. As a result, I logged 4.8 miles in 36 minutes, as opposed to 4.7.

Tuesday: 7.2 miles @ 8:58 average.
After a horrible night of sleep in a Miami hotel room, I made my way down to the crappy basement gym. They only had 3 treadmills, so I had to wait awhile, which ultimately meant cutting my workout a little short. Unfortunately,  it wasn't possible for me to run outside because it was dark out and I didn't know where I was going. Miami isn't exactly the safest place for a woman to be running alone in the dark.

Wednesday: 8.6 miles @ 8:52 average.
Treadmill again, but this time I woke up about an hour earlier so I had plenty of time. Even though I arrived at the fitness room at 5:20am, I still had to wait for a treadmill. And I was thankful that nobody was waiting for a treadmill while I was using it. I noticed that this run made my legs tired and sore. I'm not used to the treadmill. And even though I was going at a slower pace than normal, my legs still suffered. I actually suffered through this entire run because that little fitness room was about 75 degrees with no fans.

Thursday: 14.3 miles, including a long tempo run.
As luck would have it, the hardest workout of the week (yes, even harder than the long run) fell on a morning with sustained 21 mph winds, heavier gusts, and wet snow. It was also dark when I started at
5:15. I briefly considered moving the workout to Friday, but I didn't want to subsequently move the long run to Sunday. So, I put on my big girl pants and just did it. I can easily say this was the hardest workout of the entire training cycle: 4 miles tempo, 3 miles tempo, 2 miles tempo, 1 mile tempo, all with 3 minute recovery jogs. Ouch!

The first four miles actually went according to plan: 7:18, 7:12, 7:08, 7:07. Portions of this were directly into a headwind, and portions were a tailwind, and there were plenty of turns which prevented me from running into a direct headwind for more than half a mile at a time thankfully. The next three miles also went well: 7:06, 7:07, 7:02. After I was done with those, I felt quite accomplished and also ready to be done. I had lingering soreness in my quads from the treadmill, so they were nearly dead, and the wind was starting to make things really mentally tough.

Things fell apart during the next two miles: 6:55, 7:22. The first mile was mainly tailwind, so that was nice, but then the second mile was directly into a headwind, and even when I tried to turn around, it was still hard. And I knew if I ran too far in one direction with the tailwind, that last mile would suffer. Because ultimately I needed to finish pretty close to where I started. I ran the last mile in 6:57 and was so happy to be done. I was actually surprised I had one more mile left in me at that pace.

Afterwards, I took an ice bath. And this was all before having to put in a full day at work! My coach told me he was glad that the weather was so challenging because I got a psychological workout.

Friday: 5.2 miles recovery @ 8:59.
The plan called for a 60-minute recovery jog, but I cut it short. After about 30 minutes, my legs were really feeling the combination of a hard tempo that was preceded by a treadmill beating. I knew I had a long run the next day, and I didn't want to be too beat up for that.

Saturday: 22.3 miles @ 8:26.
Long run! Another point-to-point long run with Greg for the first 9 miles, and then running all the way home. I had a lot more energy than I expected on this run, although my legs were not happy starting at mile 16. My training plan had prescribed 22-24 miles, and I had been shooting for 23, but I arrived home at 22.3 and thought that was plenty! My energy level was pretty good, but shortly after I took my shoes off I felt a sharp pain on the bottom of my right foot. WTF?!  I took an ice bath and an hour later it was still hurting.

I tried not to freak out. I had been 100% pain free during the run so I figured this was just a muscle spasm of some sort. Later that night, Greg and I went out for dinner and I noticed that I had the urge to walk on it (like walking helped) so that was a good sign.

Sunday: 3.7 miles @ 8:38
I waited until around 11:00am to run instead of doing it first thing. My foot was feeling about 70% better when I woke up so I figured giving it a little time would help. My coach suspected it was the beginnings of Plantar Fasciitis and recommended stretching and icing. I also decided that if it hurt while running I would stop. Thankfully, the run went pretty well. My legs were surprisingly not at all sore from the long run and I actually was going at a pretty zippy pace for a recovery run. My foot was noticeable, but not bad- like a 2.5 out of 10 on the pain scale. I think this is something that I can keep under control with regular icing and stretching. And I'm guessing it happened because of a blister on my other foot, which may have caused me to alter my stride. It just needs to hold out for three more weeks! 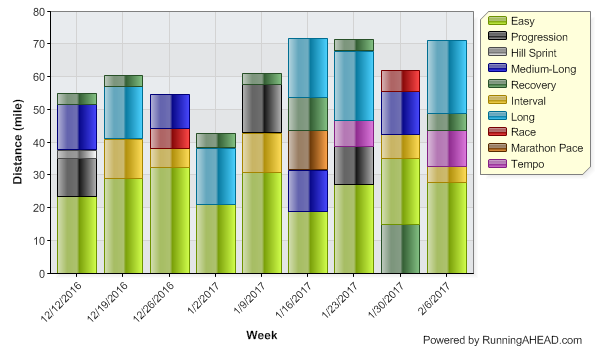 Overall, this has been my most challenging week yet. I think that having just one day to recover from my 10K plus two days of treadmill running really beat up my legs. That wind on Thursday didn't help matters, either. And I have a huge blister to deal with! Thankfully, my energy levels remained high and I feel healthy. The foot is definitely a "watch out" and I will be making a visit to my sports chiropractor early this week. 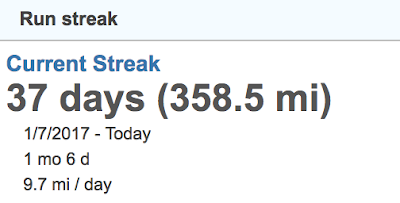