MCM 10K- There's a First Time For Everything

Have you ever been running a 10K, and during that 5th mile really wanted the race to be over? Really just wanted to stop? We've all been there. 10Ks are tough, and they feel especially hard during mile 5 when you have been running for awhile, but aren't quite in the home stretch.

Well, today, that came true for me and about a thousand other runners during the MCM 10K. About 4.6 miles into the race and I came upon a crowd of people. Runners. Stopped. Blocked from running any farther. Was the race over? Would we be able to continue? A helicopter flew overhead and I thought something bad must have happened. The big decision-- to stop the Garmin, or to keep it going?

Background
As most of my readers know, I had mono over the summer and had to take most of the summer off. I started running again in September with a "jog-walk" approach. I wanted to be on the safe side and avoid risking a relapse. It wasn't until October hit that I truly felt 100% all of the time and was ready to tackle true "training". No more walk breaks, and the addition of speed work.

Even though mono really, really sucks, there are some benefits. One of them is that when you come back, progress is quick. Although it will take me awhile to get back to my pre-mono fitness level, I get to see noticeable gains each week. It's like I am setting a PR each week with my average training pace and the pace that feels "easy" to me and for my heart rate. It's a bit upsetting to be slower, but it's also encouraging to see steady progress. 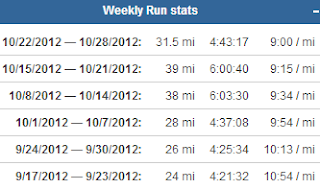 I've also been working a lot on focusing on "the process" of running. Instead of judging each run and race by my time, thinking about each run/race as a process and the steps I need to take. The half marathon I ran two weeks ago was a good example of this.

Today, my process was more about trying my best and staying strong. 10Ks hurt, and it's tough to hang in there at the end and keep pushing. I wanted to practice that today. I also had a strategy of starting at around a 8:10 pace, but then having all of my other miles be sub-8:00. I did go out a little faster than planned, but without knowing what I was capable of  and my starting pace feeling good, I just went with it.

I ran this MCM 10K in its inaugural year-- 2007. It wasn't a good race for me and there were many organizational challenges. The race didn't start on time by about 30 minutes. The wheelchair marathoners barreled right through all of us. The mile markers were off. But I figured that with 5 years of experience, maybe they had gotten their act together. To some extent they had, but their mile markers were still way off and they didn't have enough porta potties. The 2007 course was very different from today's course. It had mainly been a run on route 110 and through Crystal City. But today it started downtown, crossed over the 14th street bridge, went very briefly through Crystal City and then onto 110 and the finish.

Pre-Race
Greg and I left the house at around 6:00 and drove to a metro station. We had already looked up what the fare would be online, so we knew that we needed $2.00/each. However, when we got there, the machine wouldn't let us purchase a card for less than $2.70. Thankfully, we had brought an extra $1 bill in addition to our $5, otherwise we would have been screwed. So, we each had to pay $0.70 extra for no apparent reason. Upon exiting the metro, the machine wouldn't let us exit because we didn't have enough money on our fare cards. It's then that we learned that metro fare cards now cost $1.00. Really??? What a rip-off? Since when did they start charging $1.00 for a tiny slip of paper?  We thankfully had just enough change to add the money and leave the metro.

Once out of the metro, we found the porta-potties. There were a lot of them, but this 10K also allows for 10,000 runners. A runner per meter! We waited in the line for about 30 minutes before we were able to use the porta potty. This meant no warmup. Extremely frustrating. When will large races learn that they need more than just 30 porta potties for 10,000 runners? We ran to baggage check, dropped off our bag, and then got into the starting corral just after they had finished the national anthem. We had cut it very close, but had about 3 minutes to spare in the corral.

Miles 1-3
I ran my first mile a touch on the faster side than had planned. But that was okay because I really didn't know what I was capable of. After the first mile, I noticed that I was hot. My face was sweaty and burning up. It was 58 degrees and while that's not "hot", I am affected by anything over 50 degrees. Especially since it had been in the 40's in the mornings for the past two weeks and most of my training had been in cooler temperatures. I wished I had drank more water before the race, but it was too late for that now. Miles 2-3 were over the 14th street bridge and it was hillier than I remember. It seems like the shorter the distance, the more noticeable hills are. I didn't even notice these hills when I ran the marathon in 2006.

Miles 4-Finish
Once we got into Crystal city, the wind become very strong. With hurricane Sandy approaching, we had actually been pretty lucky that there was no rain the wind wasn't much of a factor for the first three miles. But then it started to pick up and I tried drafting off of some guys.

With two miles left to go I was feeling the affects of the race, but still had energy left. At mile 4.6, that's when the race just stopped. Everyone was standing around talking to each other. I found Greg and he told me that he heard something about a suspicious package up ahead that they had to clear out. I thought we'd be there for a long time. I had mixed emotions about this. I was immediately happy not to be running, but I had also worked really hard to get to that point at the pace I did and was disappointed that I wasn't going to get an official, valid time. I did stop my Garmin because I had run a strong race up until that point and I wanted to make sure that was recorded accurately. Plus, if we did get to finish the race, I would have a Garmin time that would reflect 6.2 miles.

Suddenly, after I had been stopped for about two minutes, we were allowed to finish the race. I got a nice 2-minute break, but faster runners were stopped for longer. Slower runners probably didn't even feel the effects of this. 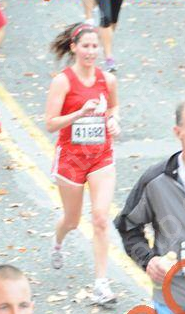 The last 0.2 of this race features an infamous uphill. When you run the marathon, there are tons of people cheering for you the whole way. When you run the 10K, not so much. I had nothing to give here. I didn't want to kill my legs on a hill when I knew I wouldn't even be getting a valid time. This race isn't worth missing a day of training next week because I killed my legs, so I just slowed down. Even after you reach the top of the steep hill, there is an incline to the finish. My team does hill repeats on this second incline during the summer, so the hill was very noticeable to me. My last 0.23 was a 9:20 pace. Yeah, I just gave in to the hill.

My Garmin time (which is more accurate than the official time) was 49:30. It was within my target range, although I was hoping for slightly faster-- based on my recent training runs in the cooler temperatures. I did get a 2-minute break, so who knows what my time would have been if I hadn't gotten to stop. Regardless, it shows huge progress from 4 weeks ago, and I was proud of the strong effort level I was putting out.

My official/unofficial time was 51:18. The female winner clocked in at 47:xx. It's really a shame that the race was messed up, but at least we didn't run into a bomb. I'd rather be alive with an inaccurate time than dead!

Post-Race
Greg and I ran back to our car (we had no more money for the metro!) He had been going for a PR and his Garmin time tied his PR. He says he doesn't know what he would have done without the stop. We then had a celebratory breakfast at one of our favorite restaurants near where we used to live before we moved. When we got home, we finished off with another 3 miles. That gave me 10.5 for the day.

Final Thoughts
I ran a race I was proud of, but not overly excited about. Lots of my friends set PRs today in the marathon- which is amazing given the windy conditions that worsened as the day went on. There is definitely a part of me that sees all of these PRs and feels sorry for myself. Not just for getting mono but for missing out on all the opportunities I had over the past 4 years to get a marathon PR. 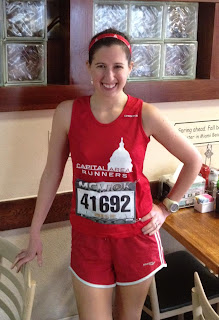 I know that I need to separate myself from what other people are doing with their marathons. I will get my marathon PR. And not only that-- I will get a PR that actually reflects the fitness I have built up over the past 4 years of consistently running 40+mile weeks and logging tempo and interval workouts. More importantly, it will reflect all of the mental work I have done with regards to overcoming disappointment and learning how to put less pressure on myself.

Fall 2012 is not my season to set PRs. It's time to regain the fitness I lost while sick and use the races to "practice" the mental strategies I'm learning. I'm putting the pieces together now so that when the time comes, I will be ready for the marathon.
at 2:54 PM