Fox, Milwaukee and Build Up

It's not Thursday, but I have three "things" to talk about, nonetheless!

Fox
It was about 6:45 last Wednesday morning and I was out for an easy six miler on my normal residential running route. I noticed an animal run across the street so I stopped running. I'm paranoid about being chased and bitten by a dog, so whenever I see an animal running near me, I stop dead in my tracks, so as not to provoke them. I quickly realized that this wasn't a dog or a cat, but a fox. I tried to slowly walk away from it, but it followed me. I walked in another direction, and it continued to follow me. I started getting scared. I almost screamed for help.

There was a long driveway that had a car with its lights on, so I walked toward that, and waved at the car. The fox still followed. I motioned to the driver that I wanted to talk to him, so he rolled down his window. It was a 16-year-old kid on his way to school. "Is that a fox?" I asked? He said it was. "I'm scared. It's following me. Is it going to bite me?" The kid said it shouldn't bite me and that I had nothing to worry about. I almost asked him to drive me up the street, but I didn't. The car left and the fox was still there. I slowly put some distance between myself and the fox and then sprinted away as soon as I felt like I had a decent head start. The fox didn't follow, thank God.

Milwaukee
The Milwaukee Lakefront marathon is this weekend. I ran that race last year and it was disastrous. I was in the best shape of my life, fully prepared to run between a 3:30 and 3:35. All of my training runs had been solid, particularly the long runs. I had just run a 35:53 8K, so I knew my speed was there as well. The weather was great for racing and everything was in place for a huge success. And yet, at mile 9, I knew my race was over, despite a conservative start. I actually had to start walking shortly after the halfway point.

This race was a turning point for me because it made me realize that my streak of marathon bonks were due to anxiety and stress. Physiologically, everything was great. But I put so much pressure on myself to perform well at a marathon, and I felt like so much was riding on it, that I would lose a ton of energy by stressing out the week before the race. I tried to addresses this issue at my next marathon, Shamrock this past March, but telling myself to " just relax" wasn't doing the trick. If you're anxious about something and feel that you have a lot riding on it, and you've had a lot of disappointment in the past, then you need to work through it rather than just saying "I'm not going to stress." That's the tough thing about self-fulfilling prophecies.

Shamrock was also a bust. I didn't even finish the thing. I dropped out at mile 13 and spent the rest of the week feeling as if I had expended the effort of a full marathon. I've run many half marathons faster than that pace and have only required 1-2 days of recovery. Again, a strong indication that something was seriously off.

Why am I dredging all of this up now? In addition to being the 1-year anniversary of Milwaukee, my sports psychologist is having me work on attaching emotions to the process, as opposed to the outcome. Ironically, I was in peak condition last year at this time, but didn't have it together mentally. Today, I feel like I've made huge gains in the area of mental strength, although physically I am very far off from where I used to be. Anyway, to help tie emotions to the process rather than the race result, he asked me to take a close look at my last four marathons and re-review them. He wants me to find sources of accomplishment, pride, excitement, happiness, satisfaction and enjoyment.

I won't go through this entire exercise on my blog, but I will point out a few things about Milwaukee that could have brought me these emotions.


If I were to run the same race again today, I don't know if I'd be able to focus on positive, process-oriented things. But I've committed to working on being more positive, so I would try to.

Build Up
I've now been running for about a month post-mono. I'm pleased to report that I feel 100% recovered. I think that the illness is behind me now and I no longer fear relapse like I did when I last posted two weeks ago.

I started by jog-walking and I've finally removed walk breaks. All runs (except one) have been "easy", endurance-building, zone 2 runs. I'm focusing on building endurance now, so that I can build speed on top of that later. In summary, here is a look at the last few weeks: 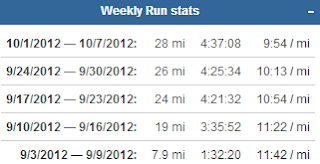 I didn't try to make it such a "perfect" progression, but I do love seeing this! As I said above, all of these were heart-rate based, zone 2 runs, with one exception.

On Tuesday, I decided it was time for an "easy tempo".  I know, an oxymoron! I did 2 x 1.5 miles at Lactate Threshold with 1/2 mile recovery. Unfortunately, it was pouring rain really hard, so I used a treadmill. I set the treadmill to 7.0 (8:34 pace) and did the workout. This felt tough, but not "tempo tough". It truly was an easy tempo. Had I been outside, I am sure I would have run faster, but I overheat very easily on a treadmill so I was conservative.

Yesterday, I ran 10 miles at an average 9:57 pace. I didn't take walk breaks, but I figured I'd have to stop for traffic lights anyway. Of course, on the one run where I want to stop at a light, they are all green. I don't think I ever have a run when all the lights are green. But they were yesterday, so I ran straight through and felt good the whole way. Huge progress from last weekend when I ran 9 miles and mile 9 felt like mile 20 of a 20-miler.

I'm not making any judgments about where I am at fitness-wise. As shown above, I'm progressing every week and I know that no one single run can determine what kind of shape I'm in. I'm going to run all my planned races this fall. I probably won't race them all at full effort (some I will), but I don't want to shy away from races that I am fully capable of participating in just because my time will be slow. It will be a true lesson in trying my best and having that be good enough.
at 7:53 AM