Heritage Half Marathon: All About the Execution

As most of you know, I had mono for pretty much the whole summer and was unable run or do any kind of physical activity. It sucked, but it's over, and now my focus is on re-gaining the fitness I lost over three months.

I had registered for the Heritage Half Marathon back in the Spring. I ran this race and 2010 and I loved it. I actually placed third in my age group back then and it was really thrilling.  Anyway, this race is awesome. It's only a 20-minute drive from my house, it's well-organized, it's got an early 7:00am start, there is great course support, there are plenty of indoor bathrooms to use and it's not too big or too small. The only downside is that this race is all hills. Most of them aren't very steep, but extremely long. Although there are a few hills that are on the steeper side.

Strategy and Goals
I've only been "training" for about four weeks now. Actually, I think I was still run-walking four weeks ago at this time. My longest run since the mono had been 10 miles last week. Obviously, I was in no shape to race a half marathon, but I figured the race would provide a good opportunity to set some other goals:


My sports psychologist has really emphasized the importance of focusing on these things instead of my time. It was easy to not focus on my time during this race because I know that I am not in the best of shape. The real test will be if I can continue to focus on these process-type goals once I am back to my old self and looking to set PRs. Today was a perfect day to practice being focused on strategy and execution.

Since my longest run thus far had been only 10 miles, I knew that simply covering the 13.1-mile distance would be a good accomplishment. I went back and forth in the weeks leading up to this race on how I wanted to approach it, but Greg helped me realize that the best workout I could get would be to combine an easy run and a tempo run. I had thought I might race it at "half effort" but that wasn't going to really get me anywhere in terms of physical or mental training. I decided to run the first 9 miles at an easy pace, keeping my heart rate in zone 2, and then running a tempo for the last 4 miles. 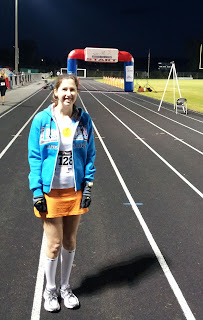 It was about 45 degrees, and I didn't remember 45 degrees being so cold. I was freezing at the start line. This race also has a 5K, so they let those runners go at 7:00am, and then the half marathoners went about 5 minutes later. I was wearing a skirt, a short-sleeved shirt and gloves, and I shed my hoodie to Greg about 2 minutes before the start.

My coach will not like to hear this but I did not eat anything before the race. I had a good dinner last night, and I was planning on taking two gels during the race. My main reason here is that I am trying to teach my body to burn more calories from fat, so it will have better fat utilization in longer runs. Per my VO2 max test I took last spring, I know that my body is exceptionally poor at using fat for fuel, so I am experimenting with not eating before runs, and just relying on the gels during the run. However, once a long run turns into 16+ miles, I will eat breakfast because I know I need to train my digestive system.

Miles 1-7
The course started on a huge downhill. I probably took this too fast, but my heart rate was really low and it felt very easy. My splits for these miles don't look to great, but I did keep my heart rate in Zone 2, and some of it is a product of there just being a lot of hills. It's hard to keep a low heart rate up a hill. 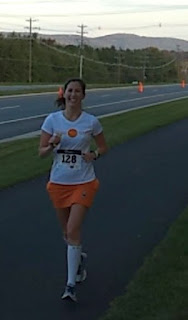 Around mile 2, people started passing me. This was tough mentally, but I told myself I needed to focus on sticking to my strategy. I hoped I would pass these people later. A girl with a sweatshirt hoodie and spandex passed me. Oh man, I was just passed by someone wearing a hoodie, I thought to myself. But I stuck to my strategy, I didn't want to focus on other people-- just me and what I set out to do.

The course website said that there would be water at mile 3.5, which is where I planned to take my first gel. However, just after mile 3, there was water and I realized I missed my chance. I love this race, but that waterstop definitely was not at 3.5. This meant I had to wait until 5.5 for my first gel, but I didn't worry too much. During mile 4, someone shouted out to me, "I read your blog!" OMG- wow!  So cool! I didn't think anyone read this blog aside from my friends. "You have the stripes blog!" he yelled out. Then, the guy next to me said "you have a blog?" and then I struck up a conversation with him. It was nice to have someone to chat with and I ran with this guy until mile 5.5, when I stopped to take in plenty of water and my gel.

Greg was at mile 5, cheering for me and taking video. It was great to have such awesome support!

Miles 8-Finish
There is a steep, long hill during the 9th mile known as "caterpillar hill". I took this thing very slowly, knowing that I was going to start my tempo at mile marker 9. I stopped at the 8.5 aid station for water and I took my second gel. After that, I was ready to go. I caught up with the guy who I had been running with earlier in the race but passed him pretty quickly. Shortly after, I passed the guy who reads my blog. Then I just started passing everyone. It felt great! 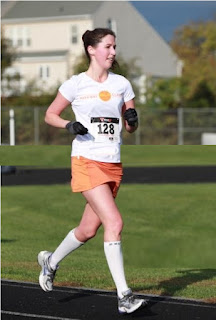 Mile 10 felt like an "easy" tempo. My goal was to keep my heart rate between 172-180, and I didn't have to run that fast up the hills to make that happen. The last three miles felt like a true tempo. It was hard. My legs were tired and the hills were just constant. At times, I wanted to back off the pace thinking that I didn't care about my time, but I told myself that this race was about execution and getting a good tempo in. I wanted to make sure I got that good tempo workout in-- I knew it would pay off in future races and really help me progress in regaining my fitness. I also just wanted to stay strong mentally. I have a 10K coming up and I wanted to practice staying focused and hanging on to a challenging effort level.

I maintained the effort level and even though the pace wasn't all that fast, I knew I was doing the "work" necessary to get my tempo pace back to where it used to be.

Greg was cheering for me at mile 12.5 as I approached the school where the finish line was. I didn't realize we had to do a lap around the track and I thought I was much closer to being done, so I had to dig deep to stay strong. Once on the track and off of those horrible hills, I just killed it. I passed like 10 people on track. Nobody passed me. About 50 meters before the finish, I whizzed by a pack of three so quickly they probably didn't know what hit them! (You can see it in the below video). And guess what-- one of them was the girl in the hoodie!!!! Yes!!

I didn't realize how strong of a kick I had in me. I guess finishing on a track is great because I'm used to pushing myself there and kicking hard at the end of intervals, so I was well prepared. 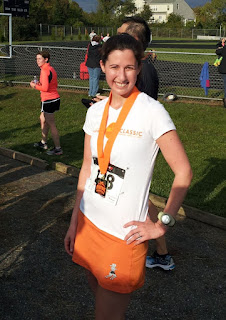 I was very pleased with my strong finish and passing of everyone on the track. My official time was 2:00:58, which was better than expected. I thought I would be somewhere around 2:05, but hadn't really done the math.

I felt nauseous immediately afterwards and my legs were really tired. But after awhile I started to feel better. As I started to reflect on my performance, I was very pleased. In fact the more I thought about it, the more proud I felt. If I can do this in all of my races, I will be golden. I had a very clear strategy and I executed it exactly as planned. When things got hard at the end, I stayed positive and continued to push. I had a strong finish really enjoyed the race atmosphere. I learned that random people read my blog, and I got to run with somebody interesting for 2 miles. This is what racing is all about!