This morning I ran the Patriot's Cup Corporate Challenge 8K race in Fairfax. I had never heard of this race until my husband brought it to my attention. It's a race to benefit The Arc, which is an organization that helps individuals with intellectual and developmental disabilities. Large corporations sponsor the event and form teams. Greg works at Lockheed Martin and they are very competitive about this race. Lockheed Martin had three teams with 5-8 people each. Two men's teams and a women's team.

My goal was a 36:45, which was predicted by the McMillan calculator from my 5K race last weekend. But I would have been happy with anything under 37 minutes.

Greg and I got to the race, took a team picture with his co-workers and then did a 1.5 mile warmup on the course. The course was fairly hilly. I would call it "rolling hills" for most of the race with a few larger ones tossed in there. There weren't any flat stretches. After the warmup, we lined up at the start line. The weather was surprisingly nice. It was overcast and 57 degrees. I think the overcast sky made all the difference because sunny and 55 can be tough on me.

Miles 1-2
These miles were smooth sailing. There were definitely hills, but I stuck to my tried-and-true strategy of even effort: flying on the downhills and running conservatively on the uphills. Mile 1 was 7:23, Mile 2 was 7:24. I was running very close to a woman who I thought I recognized from last week's 5K. In the 5K I remember running close to her for the first mile and then passing her. I wasn't positive it was the same woman, but it looked a lot like her. 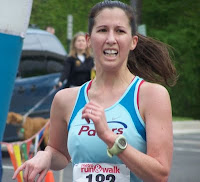 This was the toughest part of the race. Both Greg and I had mile 3 as the slowest mile. 7:45 in my case. There was just this big long section of hill that didn't seem to end. I ended up passing the woman who I had been running behind, but I continued to hear her, so I know she must be close.  I was able to redeem myself slightly in the 4th mile (7:35) but I couldn't take full advantage of the downhill because I was trying to recover from all the previous uphills.

Last 0.97
There was a nice downhill for the first half of this mile and I was cruising along at a 7:15. But then, there was this really long uphill stretch that just really got me. I felt like I was crawling up the hill. I knew I was so close to the finish line, but I just couldn't make myself go any faster. According to my Garmin, my pace for the last mile was 7:26, but the Garmin also had the course measured slightly shorter than an 8K. But because the large majority of courses are longer than my Garmin distance (making my official pace slower than Garmin) I'm perfectly fine accepting a slightly faster pace than Garmin for this race.

My finish time was 36:46, and I won my age group!  I was the 7th overall female (not sure how many total there were). My Lockheed Martin Women's team won first place for the women's division. Greg ran a 34:31-- he's gotten so fast lately!

I also got to talk to the woman who I had been running near, and she won her age group (40-49). It turns out that she was the same woman from Crystal City and that she was running 4 races this weekend. Yes, 4 races in one weekend. WOW!!!!

My analysis of this race was that my "Garmin" pace was slower than I would have liked although my "official" pace was right on target. However, I was basing my goal off of a 5K that wasn't nearly as hilly as this course. So given all of that, I am very happy with my performance. I ran hard and got in a fantastic speed workout. This is a PR by about 3 minutes, but the last time I ran an 8K that wasn't in ridiculously hot weather was 2007.

In terms of coming back from my stress fractures, my longest run to date has been 9 miles (I've done two of those), and this race wraps up my highest mileage week post-injury at 27.  I'm also still swimming, pool running, and using the elliptical.
at 1:37 PM