I gave away the punchline in the title. I ran a 5K PR last night at the Crystal Run 5K Friday. Granted, it was only a 3-second PR, but when you're talking about a 5K, every second counts. And when you're only seven weeks into post-injury training (maxing out at 23 miles per week so far), I think it's pretty significant.  I ran this exact same race two weeks ago, and I beat that time by 22 seconds.

Pre-Race
Crystal City is about 26 miles away from where I live. In rush hour traffic on Good Friday, that meant driving for 80 minutes. Yes, it took nearly an hour and a half to get to the race. There was an accident on the highway so we took other roads, and I am pretty sure that 95% of the 50+ lights that we hit were red. I was seriously questioning if we were going to make it to the race in time and Greg vowed that he would never run another Crystal City 5K Friday. It was very stressful, but Greg pointed out that it gave me something to focus on other than the race. However, when I got out of the car in the parking lot, I noticed I was shaking. 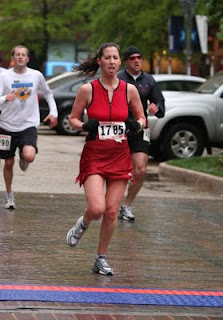 We had enough time to warmup for 1.3 miles and get to the start line.

It was raining steadily. Not a downpour, but more rain than there had been at the previous 5K two weeks ago. It was windy, as it always seems to be in Crystal City, but it didn't seem to be as bad as the April 8 race.   There were only a few times when I noticed it being a limiting factor, whereas two weeks ago, the wind dominated my entire second mile.

This was also the "Red Dress Run" for the American Heart Association and participants were encouraged to wear red dresses. I complied. Unfortunately, I wasn't able to wear my Mizuno Elixirs (which have red in them) because those are lightweight trainers and I wanted to be extra careful about not re-injuring my shins. So the trusty Brooks Adrenaline it was.

Mile 1: 7:06
I got off to a slow start. Even though I started close to the front of the pack, there was still quite a bit of crowding in the first quarter mile, and  I glanced down at my Garmin to see a 7:30. I didn't want to expend too much energy weaving through people, but I had to get my speed up. During this mile, I told myself that I would be my own mental coach. And I was going to pretend that I was two people: myself and my coach. And that the coach had to be positive but pushy, and that I had to listen! I had read a blog earlier in the day that said "speed comes from being relaxed" so my coaching self reinforced that to me throughout the race. 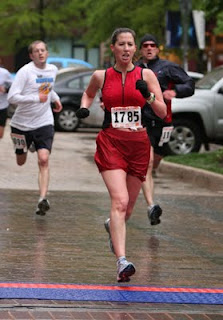 I was determined not to let this mile kill my race like it did two weeks ago. There was still the same incline, but the wind wasn't as bad. I drafted a little, too, which helped. The person I was drafting off of was running faster than me so that motivated to keep up with him so I wouldn't loose my wind shield.

Mile 3: 7:08
By this point, I thought I could PR, even if it was extremely slight. I told myself to just hang in there for the first half of the mile, and then really just give it everything I had the second half of the mile, starting my finish line kick before mile marker 3. I remembered from last time how the last 0.05 were on a slippery, curved incline. Losing time would be inevitable so I tried to make up for that beforehand, and during that final 40 feet to the finish line. I kept telling myself to relax but push, and I did. I pushed really hard during the last half mile, and for the last quarter mile, my Garmin was showing that I was solidly in the 6's.

I'm super excited about my PR and how I mentally coached myself throughout the race. I had a race strategy based on my experience from two weeks ago and I stuck to it.

Overall it was a great night, and well worth the 80-minute rainy drive for those 3 seconds of the PR. :-)

Here is a link to the Video of me crossing the finish line.
at 6:57 AM