I ran the Alexandria Running Festival half marathon this morning. It wasn't a fast race due to the weather conditions, but I am happy with my execution.

Background
I decided to run this race back in March. I was just coming off of three stress fractures and I wanted a goal race to train for. I knew when I signed up that the race would likely be hot, but I still wanted to be able to run a half marathon this season.

Training
My training mileage for this half marathon was lower than it has been for any half marathon over the past three years due to the injury. However, I supplemented it with swimming, pool running and the elliptical. Here is a graph of my land mileage leading up to the race:

My longest run was 12 miles, and I did two of those on the two weekends leading up to the race. I had done one 11-miler and everything else was in the single digits. One victory for today was actually completing the 13.1 miles, a distance I haven't run since early January.

My training included two 5K races and one 8K, two of which were PRs. But because these races had much cooler conditions, there was no way I could expect a half marathon PR. My goal was just to run my best without bonking.

Pre-Race
Earlier this week I think I suffered from dehydration. I attempted a 7-mile progression run at modest paces, and I bonked. Afterwards I felt weak and on the verge of passing out. The next day, I woke up and the room was spinning. I was planning to run again, but I was far too dizzy. I even waited a few hours before I felt safe to drive to work. Since then I have been drinking LOTS of water. It was a scary reminder that not drinking more water than you think you need can be dangerous when it's so hot and humid out! It also forced me to do more of a taper than originally planned. This week, I ran 7 miles on Tuesday and 5 miles on Friday, and that was it. I went swimming on Monday, but there was no other cross training involved. I think I was very well rested and hydrated by the time this morning rolled around.

Race time was 7:15, so that meant that my husband and I had to leave our house at 6:00.  We woke up at 5:00, I ate 2/3 of a salt bagel, drank a cup of water and we were off.  About 5 minutes into our drive, I realized that I had forgotten my Garmin at home. I told Greg that I would just have to deal, but he encouraged me to turn around and go back for it. I remembered Amy's race report where she ran a fantastic marathon without looking at her watch. I also remembered the Houston Half marathon from 2008 when my watch failed and PRed. I thought it might be good to experiment, but I decided to go back for the Garmin, because I wanted to monitor my heart rate. I was afraid that I would go out too fast and overdo it if I ran by feel.

Now I was worried about us being late to the race, but everything turned out okay. The race was even delayed by 10 minutes (grrrrr) so we were definitely fine. They had run out of shirts by the time we got there, but I think you can email the race director and he'll order more.

I carried my own bottle of G2 with me because I know that doesn't upset my stomach and I would know exactly how much I drank. I also planned to take one honey stinger energy gel at mile 7.

The Weather
It was forecast to be 71 degrees at race start, and that felt pretty accurate. It was very humid, but thankfully it was overcast. In fact, we really lucked out with the clouds. The forecast was for it to be sunny but the sun didn't come out until after I finished. If it had, I think I would have been a few minutes slower. I feel like I just bake when it's sunny.

The Course
This was a challenging course. There was an area that had a park as part of it that we had to circle three times. It was a loop of about 2 miles. There were quite a few twists and turns and ups and downs. At times, the course was very narrow and it was impossible to pass anyone. I felt bad for the really fast runners who had to spend their third lap weaving through people who were still on their first lap, or second lap for that matter. Because of how the course was, there was no space in many cases to pass people on the grass or on the side. This frustrated me at a few points, but I wasn't trying to race it competitively like the front runners.

Miles 1-4
I figured I would start out at a pace of about 8:40 and try to run the race as a progression- maybe landing somewhere around 8:00. During the first few miles there were quite a few people who passed me. It was hard  not to let this affect me, but I stuck to my plan. I stayed in tune with how I felt and monitored my heart rate. I was in the "recovery" zone for the first mile and clocked an 8:22. This was faster than anticipated, but the heart rate was happy with it, so I decided I would do a very gradual progression from 8:22 down to 8:00.

Miles 5-9
Everything had been going smoothly when all of a sudden I noticed that my heart rate was well into the tempo/LT zone. This was to be expected. It is a half marathon after all, but it's like it just suddenly jumped up and I was now working hard. Soon after, I found myself slowing down. Miles 4-10 were the ones that went around the park area 3 times. I couldn't wait to get out of the park. I kept getting stuck behind runners/walkers who were still on an earlier lap and it was hard to maintain a "groove".

At around mile 5, I found myself running behind the woman I had met at the 8K last month who runs tons and tons of races. I said hi to her, and that I saw her photo in Washington Running Report. Her insane number of races is her claim to fame, and I was guessing she probably ran a race yesterday. She said she was taking it easy, and I thought I'd stick with her for awhile, but then shortly after I found myself running ahead. No doubt that if there is a local race tomorrow- she will be there! 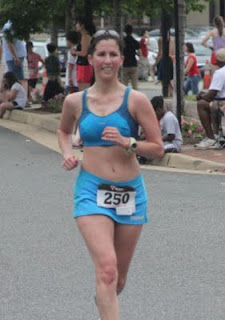 I took my Honey Stinger energy gel at mile 7, as planned. I figured the calories from the G2 would fuel the first half of the race and then the honey would fuel the second half. This worked out well and I had no stomach issues.

Miles 10-13
By mile marker 10, I was finally out of the park! Now it was just road running. Everything thinned out because I was no longer running with people who were on their second lap. There weren't many people around me. By this point, I wasn't really looking at my Garmin, but every time it beeped, I continued to be surprised. After I saw that 8:55 for mile 8, I was sure that all subsequent miles would be in the 9's. I was pleasantly surprised that they weren't!

According to my Garmin, my heart rate stayed in the tempo zone the entire time, but yet I wasn't really pushing. I was afraid to push too hard, and I saw no reason to kill myself during this race. It was that magical "comfortably hard" feeling that a tempo is supposed to be so I thought it must be great training.

I saw my husband at a turnaround point and he seemed to be about a minute ahead of me. Mile 12 was all downhill which made things easy. Mile 13 seemed to last forever and there was a huge hill. (Anyone familiar with the races run near the AMC Hoffman Theaters should be familiar with this hill). It's a monster to deal with at the end of any race, but a real treat once you get to the top and start running back down. Once I got to the bottom, I decided it was finally time to really push and finish strong. And I did-- a 7:20 pace!

As I expected, my ranking is a lot lower than it typically is for races because I think I am more affected by the heat than the average runner.

I am happy with how this race turned out. Given the forecast, I was expecting something along the lines of a 1:55. I realize that I ran the race over 9 minutes slower than my PR, but given that I am typically nearly 1:00/mile slower in the heat, this was a win for me. A new "hot weather" PR in the half marathon. The last hot half marathon I ran was in 2:03. Most importantly, I kept a fairly even effort and did not bonk! I think I could have pushed harder and ran a little faster, but it just wasn't worth it for me.

My shins were perfect. Not even a hint of awareness. My feet felt achy and sore for most of the race, but that may have been because my shoes only had 12 miles on them prior to the race. And I think I should have broken them in more. No post-race soreness either, although that could change tomorrow morning.

Looking Ahead
This was a great training run for the Laywer's Have Heart 10K in two weeks. I run that race every summer, so I use it as a benchmark. Thus, it's super important for me to do well!

I will "officially" start training for Milwaukee at the end of June, and in the meantime, keep my weekly mileage in the 30's plus cross training. Thanks for reading if you made it this far!
at 8:42 PM