The title of this post was inspired by a Facebook post I wrote about my glove situation. My friend Dash commented that I should coin the phrase "hold the hotties" that I used to describe running with hand warmers.

I suffer from Reynaud's syndrome, which is basically a condition where your hands and feet get cold very easily, go numb and sometimes hurt. It affects mainly women, and it's not uncommon. I have it more severely in my feet than in my hands, but it doesn't affect my feet if I start running the minute I leave my front door. (It affects me in non-running situations, like cold office buildings or even just sitting around at home). At races, however, I don't have the luxury of being in a warm spot while waiting for the race to start so I tend to run the first few miles with numb toes and/or a numb heel and it's not easy. If I'm going to be waiting outside for awhile, like in the NYC Marathon, I will wear shoe inserts that keep my feet warm until it's time to start the race-- you aren't supposed to run with them. However, at NYC, the foot warmers lost their effectiveness about hour before race start, so I still ended up with numb feet.

My number one challenge to running in cold weather is keeping my hands warm. Last weekend I did a 20-miler on the treadmill because the winds were 15-20 MPH with a real feel in the single digits to low teen's. I might have been able to tough it out had it not been for the Reynaud's syndrome in my hands.

When I first started running in cold weather back in the winter of 2006/2007, I bought a pair of Hind 3-Season gloves. They were advertised as being heavy and good for really cold weather. They worked okay, but my hands would still end up numb and often painful. Sometimes they would hurt so much I would think I was on the verge of frostbite. Then I bought a thinner pair of gloves and wore those underneath the heavy gloves. That made a difference, but my hands were still completely numb by the end of long runs. Even in weather that was in the upper 30's. 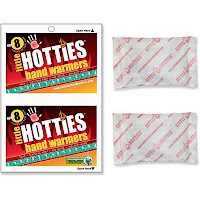 In the winter of 2007/2008, I discovered "Little Hotties" hand warmers. They were my savior: "Little Hotties Hand Warmers are little bags of warmth! They contain an air-activated heat source that provides warmth and comfort in cold conditions." That's from their web site. It's amazing how warm these things get! My solution was to wear both pairs of gloves, putting the Hotties in between them on the backs of my hands. This worked well, but it didn't solve the problem of my fingers going numb.

For the next two winters I used the same system and it worked okay. I wouldn't do long runs in weather that was colder than 30 degrees. My fingers would still go numb after an hour or so, but it wouldn't be painful with that "I'm getting frostbite" sensation.

Fast forward to this winter. I had been accustomed to doing 100% of my runs outdoors because I moved to a new home that had safer places to run. I was spoiled with outdoor running and very reluctant to head back to the treadmill. But it would always be in the 20's (I run in the mornings before work), which would pose a problem for my hands. I discovered that if I didn't use the gloves as gloves, but rather as mittens, my hands would be warmer. By bunching my fingers together and holding the Hotties in the palms of my hands, my fingers would be nice and toasty. But then the backs of my hands would get cold, so I would have to rotate the position of the Hotties, which wasn't easy to do while running. So my morning runs were basically a back-and-forth rotation of where the Hotties would be (about once every ten minutes), and yet I would still come home with painful hands that were immobile. I had even tried the Mizuno Breath Thermo gloves (the thinner ones) as a base glove because they are made out of a special material that turns moisture, like sweat and rain, into heat. They are great for rainy runs, but they still didn't do the trick, even when combined with the Hotties and a heavier par of gloves over them. 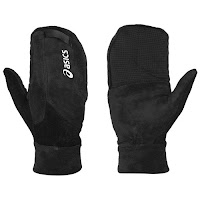 I finally looked into getting some running mittens, since that's how I was using my gloves anyway. My fingers were warmer when bunched up together and sharing heat. I did some research online and discovered the Asics Ecoline Fleece Mittens. They looked warm and came in S-M-L so I could get a pair small enough to prevent air from coming through at the wrists. I ordered them online, but they didn't arrive in time for my 20-miler last weekend so I was treadmill bound. But today I was very excited to try them for the first time.

The weather forecast for today's run (15-miler) was a "real feel" in the mid to upper 20's. My strategy was to wear the mittens with two Hotties in each mitten: one for the back of my hand and one to hold onto to keep my fingers warm. This would prevent the constant rotation that I was having to do on my other runs. Two miles into the run, my hands start to get hot and sweaty. It got more and more uncomfortable so I took one Hottie out of each glove and put them into my pocket. I ran two more miles and my hands were still uncomfortably hot and sweaty. The thing about these gloves is that they are very tight around the wrist and they let no air in. That's a good thing, but it also made it impossible for any of the heat from the Hotties to escape, and those things get really hot! So I took the other Hotties out of the mittens and ran the rest of my run with just the mittens. My hands were cold, but not to the extent of being numb and painful. My thumbs were the only digits that became numb by the end, and that could have been avoided if I bunched them up in my fist and didn't use the thumb area of the mitten. It's amazing how much heat can be preserved when the fingers can touch each other and no air is let into the mitten.

Going forward, my hand solution will be to start the run with just one set of Hotties, and then remove them if need be. My hands ended up being okay without the Hotties in today's temps, but in the upper teen ands low 20's, I might need those Hotties back!