For some reason, I've had a great deal of anxiety regarding the Virginia Beach Half Marathon. I ran it last year, and was very happy with my time of 2:00, but this year I was obsessed with beating it by several minutes. Since I ran this race last year, I have run two 10Ks, a 10-miler, another half-marathon and a full marathon. I trained harder for the race this year than last, and I felt much more prepared.

About two weeks ago I had a dream that I arrived at the race without my timing chip. (I had purchased the $35 VA Beach Souvenir timing chip last year to use in all my races). I also dreamt that I arrived too late to the race and encountered all sorts of strange obstacles. I've had many eerily predictive dreams in the past, but I have anxiety dreams more frequently, so I thought these dreams about the race were simply my anxiety.

I was very careful to pack my timing chip and bring it with me. I arrived at my friend's house at around noon yesterday, and then she drove us to the packet pickup, which was a 20-minute drive. Upon arrival, I realized that I had left my chip at her house so it couldn't be scanned in and used to identify me. I didn't want to make her drive all the way back for it, so I just used a rental trip. I know this doesn't sound like a big deal-- my race was still timed. But that's my "lucky" chip and I wanted to use it in all the major races I ran. I was extremely frustrated at myself for having made such a special effort to remember to pack it, only to leave it at my friends house.

That night, I got about 3 hours of light sleep. I tossed and turned all night, and had even more anxiety dreams about missing the race. The previous night, I had only gotten 4 hours, so I was really worried about running 13.1 miles on only 7 hours of sleep for the past two nights.

I woke up at 3:15 and couldn't fall back asleep, so I could have easily left my friend's house at 4:00 or 4:30. However, I didn't think I needed to leave her place until around 5:15. So I waited until 5:15 to leave, thinking I would have plenty of time. We were not allowed to park at the start line. We had to park at a satellite lot that was about 25 minutes away from the start line and 20 minutes away from my friend's house.

Instead of taking 20 minutes to drive to the parking lot, it took me over an hour. The traffic was backed up for miles and was moving extremely slowly. There were no police officers directing traffic, so we were at the mercy of lights that remained red for 30 seconds, let 5 cars in on a green, and then were red again for 30 seconds. I was getting nervous that I wouldn't arrive to the race on time.

I had planned to get there early so I could stretch out, go to the bathroom, and maybe have half a bagel. But instead I was stuck in my car for an hour and my back was killing me as my foot kept switching from the brake to the accelerator every five seconds.

It was 6:25 when I stepped on the shuttle bus, and we were dropped off at 6:50, just ten minutes before the start of the race. My first stop was the "gear check" where, as the name implies, you check your stuff and they drive it to the finish line. I had my car keys with me, my cell phone, and my comfortable sandals to wear after the race. When I got there, they informed me and the rest of the people from my shuttle bus that it was too late to check our bags, and we would have to leave them in a pile at the start line (which was over a mile away from the finish line). So, I left my driver's license, keys, cell phone, and sandals in a big pile of bags, not knowing if they would be supervised.

I had planned to call my friend who I was staying with when I finished the race, but that would now be 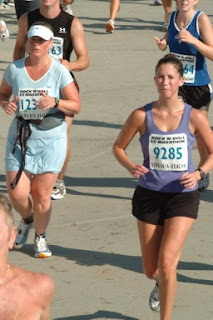 impossible. With five minutes until start time, and the lines at the porta-potties extremely long, I didn't think I'd have time to go to the bathroom. And I really needed to go because I had drank an entire bottle of water in my car. So, I waited anyway, and by the time I got out of the bathroom and arrived to the starting area, the race had started, but luckily my "corral" group hadn't crossed the start line yet. Forget stretching out.

And so I ran the race on only three hours of sleep, without having stretched, without my lucky timing chip, and after having spent over an hour sitting in stop-and-go traffic. The weather was nice and sunny, but it was much hotter than last year-- I would guess about 10 degrees warmer, making me extremely exhausted by mile 7, and completely demotivating me. I was trying to average a pace of 8:50, and I was on track to do that until about mile 7, when the course went for a long time without being shaded and the sun was bearing down on me.

I finished the race, but I am too embarrassed to write my time. (Edited to add, years later, I ran a time of 2:06:41). I am proud to have finished 1,834 out of 9,123 women, but I still fared much better last year. I don't see myself as competing with others-- just myself. I was extremely disappointed and depressed. It didn't even feel good to cross the finish line-- I just hated myself by that point. At mile 10, I realized that I would not be able to beat my 2:00, so I stopped caring.

I decided to chalk the whole thing up to a "training run" for the Philadelphia half marathon I am running in two weeks. At least I have a chance to redeem myself. After the race, there was no transportation back to the start line, so I decided to walk about a mile to my other friend's house (she lives just one block from the beach). I had taken off my running shoes and was wearing the free sandals they give you at the finish line which were 4 sizes too big for me. I was carrying my running shoes in the bag that the sandals came in and as I passed a garbage can I had this urge to just throw my running shoes in the trash and say "fuck it". 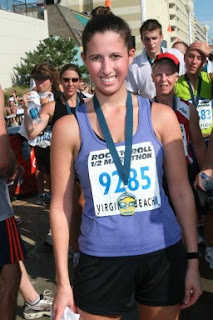 I obviously couldn't call the friend whose house I was walking to or the friend who I was staying with, since my phone was in a bag at the start line. Thankfully, this friend who lives on the beach drove me to the start line where I retrieved my bag and found all of my belongings safe and sound. I immediately ditched the size 9 sandals they gave me at the finish line for my normal size 5 comfy sandals and breathed a sigh of relief.

She then drove me 20 minutes back to the parking lot, where it took me awhile to locate my car (remembering the location of my car wasn't exactly top of mind this morning as I panicked about making the race on time). I drove back to my other friend's house, showered and then drove home.

I'm still really depressed about the whole situation. I trained really hard for this race and followed all the "rules" for tapering, eating right, etc. I made sure I had plenty of time to get to the race, but I didn't predict an hour's worth of traffic to get to a parking lot. A former boss of mine told me that he once ran a marathon in 3:59, and he's run four since then, but has never managed to beat the 3:59. I worry that I won't ever beat my 2:00, and for some reason, this is very important to me. I do have the chance to redeem myself in two weeks, but considering I really exerted myself today, I am not sure I will be fully recovered enough to put my full effort in. At the very least this race will have yielded some nice photos. 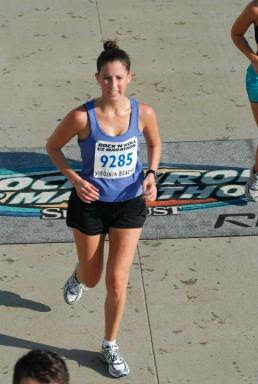