I ran my 4th half marathon today, the second in a series of two for the month of September. It was the Philadelphia Distance Run, and I was running the race with some of my friends.

A few months ago, I had responded to the "Tell Us Your Story" request e-mail with a dramatically written (but true) version of my "story". They told me they were going to feature me in the race program and they asked me to submit a picture. I was pleasantly surprised to see that they actually did publish my story and photo, along with the stories of about six other runners: 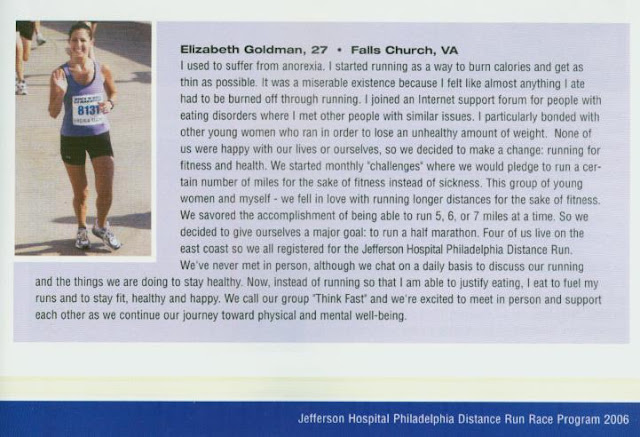 I had a much more positive attitude about this race than the Virginia Beach half marathon. This race was more about fun and friends. I was well rested for this race, except if you consider the fact that I had run a half marathon just two weeks prior, and may not have been fully recovered. It apparently takes 3 weeks to recover from a half marathon, but I felt completely ready to run the race this morning.

In between the races, I had done some short tempo runs, at a pace of about 8:20. I was aiming for a race pace of 8:50, which I thought was very possible.

This race was identical to the VA Beach half. They are organized by the same company, so I felt like I was running the exact same race, but with different scenery. Everything from how the packet-pickup and expo was arranged to how they handled the start and finish. They even used the exact same corral signs. It was a weird sense of deja vu.

The first thing I noticed was that the runners at the expo on Saturday seemed more experienced than those at the VA Beach race. At VA Beach, many people were running their first half, and it seemed to be a huge deal for them. At this race, many people seemed to have the attitude that running a half marathon wasn't a big deal. And it was obvious that most people had run in long distance races before.

During the VA Beach race, I felt like I was a little bit ahead of the main crowd. At mile 3, I could pretty much run at my own pace without trying to squeeze my way through people. At the race this morning, I felt like I was in the middle of the main crowd, and I didn't have my own "space" until about mile 6. I think that the crowd contributed to the fact that I went out slower than expected.

I typically like to start races slower than I finish them, but similar to a 10K I ran in June, I was going slower than I thought I was, and didn't pass the 5k marker until 28:57, which was slower than the VA Beach half. I didn't pass the 10K marker until 56:59-- also slower than the previous race. My split times for 5K and 10K were 28:32 and 56:32. Not a huge difference between the two races, but I felt much stronger this morning than I did at the other half marathon, so I was surprised to see that I ran the first half of today's race slower than the first half of the VA Beach race. But as I said earlier, I attribute some of that to the crowd and not being able to run quite as fast as I would have liked.

The course was really beautiful. The first four miles were in the city of Philadelphia. I haven't been to Philadelphia in over 15 years, so I had totally forgotten what it was like. The weather was nice, but the sun was extremely bright, and shining directly in my face for part of the first 4 miles. The last 9 miles are run around a river, and it was very scenic, and thankfully shaded in many parts.

As I approached mile 7, I reminded myself that this was where I started to really slow down two weeks ago, so I told myself to stay strong. I ate my Jelly Belly Sports beans at mile 8, and I realized that I really do NOT like the lemon/lime flavor. I had used that flavor before on a training run, but for some reason they tasted better on the training run. It was really difficult for me to eat them because the taste was so gross, but I ate about 2/3 of the pack and threw the rest away. 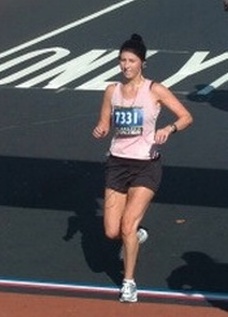 give up this time. I did get really tired and the last two miles were not shaded. It took every positive thought I had to keep running and resist the temptation to walk. I was staring at my watch, just counting the seconds until I would cross the finish line. At VA Beach, you can see the finish line from almost a mile away. For this race, you couldn't see it until you were at mile 13. Not very motivating.

I had my iPod with me, which I was not using in VA Beach, and it really helped. I had strategically chosen songs for the last two miles that would be impossible to walk to because they are so energized and powerful (playlist below). I pushed myself as hard as physically possible those last two miles and finished with a time of 2:00:50. 25 seconds slower than my Personal Record, which I am kinda bummed about, but a huge improvement from the previous half marathon. I would just love to get in under 2:00 one of these days. Even a 1:59:59 would be nice.

I placed 4296 overall, out of 11,060 total finishers. Interestingly, I placed 4926 at VA Beach, out of 16,136 finishers. My observation that the Philly runners were faster is obviously true, because even though I ran this race faster, my ranking compared to the total amount of runners was in a lower percentile. Afterwards, I met up with my friends, where we congratulated each other on the race: All in all, a great weekend, and I will write a blog about my day on Saturday when I get the photos to go with it!