This morning I ran the Feed Fairfax 5K. This race was on my radar last year for the inaugural event, but I was injured and unable to run.

This race starts about three miles from my house, making it the closest race to where I live. There used to be one that was a little closer, but they stopped running it five years ago. The coolest thing about this race 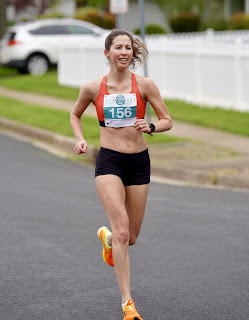 is that the course runs through a neighborhood that I am very familiar with. It's an expansive neighborhood with (relatively) little traffic so it's great for tempos and speed work. I often run a warm up to that neighborhood, do a workout, and then run home for the cool down.

With the course map in hand, I knew exactly what I was in for. I have run those streets over a thousand times, so it was nice to feel 100% prepared from a knowing-the-course perspective. There aren't a ton of hills in that neighborhood, but depending on how you run it, it can be challenging with the little rollers and the longer inclines.

Before the Race
Greg's marathon is now just two weeks away! He had his final long run on schedule: 18 miles with 9 at marathon pace. I am his coach, I felt like this workout would build his confidence and help him lock in that marathon pace feeling. Our plan was for him to warm up with me, stop to take photos of me during the first mile, and then meet up with me for a cool down post race. He would start his marathon pace miles after 8 easy miles.

I didn't sleep well last night due to digestive issues that kept me up for over an hour. I woke up naturally at around 5:15. I often have pre-race dreams that my race course has obstacles like staircases, going inside of buildings, etc. Last night, I had a new one: the street was carpeted. It was a blue/grey carpet, and on the thinner side. I can still visualize it in my mind. As part of this dream, another race director (a female) had "stolen" the race from the actual director (a male) and therefore everything was messed up because the race had been stolen. It was an "imposter" race and the actual race would occur on Sunday because the Saturday one was stolen. My subconscious is fascinating!

Anyway, shortly after waking up I had a banana, water + electrolytes, and some almond butter pretzels. I have decided that almond butter filled pretzels from Wegmans are pretty much the best pre-race fuel. I snack on them in the days leading up to a marathon or half marathon, and I eat them for breakfast before shorter races.

I prepared Greg's UCAN drink. Greg has switched from fueling with Gu to fueling with UCAN. For this run, he had the Energy Powder beforehand and two of the Edge gels during.

Even though the race was close to home, we drove there so we would have a place to stash our stuff. We arrived at 7:20 (for a race start of 8:00) and parked about half a mile from the start/finish. We thought that it would be a good spot for Greg to take photos.

We ran to the start area where I got my bib and pinned it to my sports bra. We then continued to warm up together until the race was about to start. I had a caffeinated Maurten gel 12 minutes before the start to give myself some extra pep.

The Weather
As I said in my previous post, I much preferred the hypothermia-inducing pouring rain and wind to heat and humidity. At least from a performance standpoint. I ran a time of 20:43 at last week's race and was only working at about 85% effort to do it. I perform well when it's cold.

This morning, it was 66 degrees with a dew point of 64. It was foggy and misty. There were even times of very light rain. This would be challenging weather even if I were acclimated. But I was definitely not acclimated so it was extra challenging. On my race weather scale, it gets a 3 out of 10. Last weekend's race got a 4 out of 10. That was probably a high 4. Today was probably a low 3.

Goals and Strategy
Time-wise I wanted to run sub-21 for this race. But more importantly, I wanted to execute well. The idea was to run around the same time as last weekend, but run the race much harder. At FULL 5K effort, rather than 85% effort. 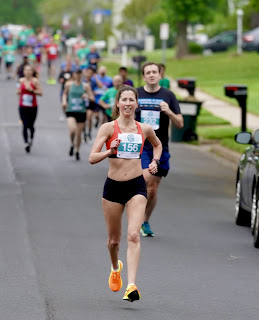 Mile 1: 6:34
This mile was downhill the entire way. It wasn't a steep down hill, but a nice, long gradual downhill aiding you the entire time. It would have been a dream to end with this mile! As I said above, this neighborhood can be super fast or relatively challenging depending how you run it. I expected a lot of the runners to sprint this (because there was a prize for the first male and first female to get to mile 1), but I held back. My strategy was to run this mile hard, but not to get carried away by the downhill. I wanted to save some gas for the rest of the race.

Even though it was the first mile and it was downhill, it felt WAY harder than last weekend's mile 3 - which was flat, and was 6:20. It must have been a really magical final mile last weekend to run a 6:20 and have it be not all that hard. . . when it wasn't even downhill!

Anyway, many runners sprinted across the start line and I held back a little. Sure enough, about a quarter mile into the race, I was passing people. It was annoying to have to weave so much, but I didn't want to be stuck behind runners that were slowing down. It wasn't long before I saw Greg and that definitely pumped me up. When I saw him, there were three women ahead of me and I was in 4th place.

Mile 2: 6:46
This mile was all about passing other runners. Shortly after the first mile marker, I realized that I was closing in on the pack in front of me. There were 4 runners: a boy who looked to be about 10 years old, two men, and one woman. We ran up a very gradual, long incline and I started to increase my effort. I first passed the boy, who said to me "You got this!" I replied back "You got this too!" That boy's energy was amazing!

Next I passed the two men and the woman, which put me in third place. The other two women were way far ahead and I knew there would be no catching them. Having people to pass really motivated me and helped me stay strong mentally.

Mile 3: 6:46
Another net uphill mile. I was really pleased with my execution, and that I had enough gas to keep my pace steady. This mile also had some gentle declines, and because I knew exactly where they would be, I took advantage of them. I passed a few more runners in this mile, too.

It wasn't long before I saw the elementary school which signaled the final turn would be coming up. Seeing that school made me realize how close I was to the finish so I was able to pick up the pace a little

with that thought in mind.

I turned the corner and Greg was there, and cheered me on. He ran with me for a tiny bit, but obviously he wasn't looking to keep up with me!

My official time was 21:06, and I was the third female finisher. I was totally gassed after crossing the finish line and I knew I had given it everything I had. After catching my breath and recovering, I found Greg and we did a cool down together. We then parted ways, I ran back to the car and drove it closer to the start/finish area. I put on a dry t-shirt and a light jacket over that. It was 68 degrees, but I was wet from the mist, and I didn't want a repeat of last weekend!

After the Race
My friend Cheryl was taking photos at the finish line, so I hung out with her there for a bit before the awards ceremony started. The awards ceremony was cool because they had a giant-sized check for the winners. Even though it was made it in the amount that the overall winners received, they wanted first, second, and third place runners to hold the check. So that was fun. I won $50 cash for coming in third!

The first and second place ladies both reported being slower than expected. I think by about a minute each, so that was validating! The humidity was pretty brutal.

This Feed Fairfax race helps feed Fairfax County residents. After the race, runners had the opportunity to assemble bags of food for those in need. I wanted to fill a bag but by the time I got there, the line was too long and I would miss the awards ceremony. I admit I still feel badly about not putting a bag together. Next year I will make a point of doing so.

Final Thoughts and Key Takeaways
While I didn't get my goal time of sub-21:00, I was only 6 seconds off! And I was very pleased with how I paced and executed this race. I think I am most proud of having miles 2 and 3 be the same pace, and not THAT much slower than the first downhill mile. It was also nice to be able to pass so many runners in the second half of the race. 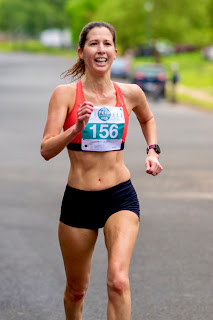 It's crazy to think that running at 100% effort, I was about 20 seconds slower than when running 85% effort. The humidity was definitely a challenge and I guess this was my introduction to the many humid days ahead that await me!

This race was very well-organized, benefited an amazing charity, and was super close to home!

Greg had a really strong marathon pace run. I told him to adjust "marathon pace" down by about 10 seconds per mile, and he did. Let's hope it's not this humid for his marathon in two weeks. I will be pacing him for the first half, officially running as a relay runner.

I don't have any more 5Ks until June, which gives me some time to train and work on building more speed.