Christmas Caper 5K: Chill but not too chilly

This morning I ran the Christmas Caper 5K in Washington DC. This was a low-key race with no chip timing and about 80 participants. This race has an accompanying 10K, which I ran last year, setting a PR. (This was the PR I just beat in my Turkey Trot). 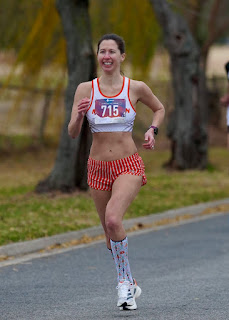 Because this race is so low key and I consider myself to be in the "off season," I wasn't overly excited about this race. It wasn't like the Turkey Trot where it was a tradition with hundreds of runners, a big awards ceremony, lots of SWAG, etc. So it was kind of hard to get super jazzed up about it. I was running it because I enjoy racing and I wanted to do a checkup on my 5K fitness.

Before the Race
I woke up naturally at 4:00am, having slept solidly throughout the night and having had gone to sleep at 8:45.  I had an English muffin with Almond butter, and about 1/3 a serving of the Maurten Drink Mix. I got dressed into my race attire, went to the bathroom about 5 times and then we were off.

We left the house a little later than planned due to my having to go to the bathroom so much, but I wasn't too worried about it. It was a 30-minute drive into the city which was stress-free and traffic-free. I immediately needed to go to the bathroom again as soon as I got out of the car. The bathrooms that we typically use for this race were closed (they are located inside of a golf shop), and we were directed to other bathrooms that were also closed.

This definitely worried me because I know I really needed to go one more time. I ran to get my bib and then headed back to the golf shop. Thankfully they let me in this time, knowing that the other bathrooms were locked. Once that was out of the way, I pinned on my bib and had a Maurten gel. It might have been overkill to have the English muffin, the drink mix, and the gel, but it worked well for the 10K.

I only had 20 minutes left to warm up so I jogged around and did some strides for a total of 1.5 miles.

Strategy and Goals
The weather was seasonably warm for mid-December: 52 degrees, overcast, with a light wind. If it had been sunny it would have bordered on too warm for me, but because it was overcast, it ended up being fine. I give it a 9/10 on my weather scale. Combined with a pancake flat course, these were PR conditions for sure.

I thought a PR would be possible based on my recent 10K time, so I decided I would go for it if I was feeling good. But I also felt like I might lack the motivation to push as hard as I did at the 10K because I wasn't as excited about the race. And with the small amount of participants, it felt more like a time trial than a race.

Another benchmark was my 5K from the November 2020 Cranberry Crawl, where I ran a time of 20:20 on the exact same course. I was hoping to beat that time, or at the very least, run the year again in 20:21.

Mile 1
The race started and it wasn't long before I settled into a groove. Two women had bolted out way ahead ofme and maintained a strong lead, so I was in third place.

It was hard early-- like starting 3 minutes in. I reminded myself that I wanted it to hurt-- hurt was good. It was supposed to be hard and my job was to push even when it was really hard. I saw Greg early in this mile; he was taking photos. I noticed I was running a pace of 6:30 and it felt really hard. I was hoping to be closer to 6:25, but no matter how hard I worked, it wasn't happening. So I ran a 6:31 first mile.

Mile 2
This course is an out-and-back so it was mentally nice to turn around and be heading towards the start/finish. I noticed some wind resistance here but I don't think it impacted me that much. I felt like I was giving 100% and I really wanted to get my pace down, but the Garmin was steady at 6:30, and my split was 6:30.

Mile 3:
Could I make this mile my fastest? As the mile started I felt like I was really running out of steam. I glanced down at my watch and it read 6:45. Yikes. I would have to push super hard to get that back down. So I pushed and pushed and pushed. I passed two people during this mile; both men. I passed one of them at around 2.8, but he came flying back by me at the very end and I couldn't out-kick him. Mile 3 ended up being 6:35.

The Finish
According to my Garmin, I ran the final 0.14 at a pace of 5:57 with a finishing time of 20:26. Good enough for third place female. (The first place overall finisher was a woman in a time of 17:xx).

A solid effort! I was proud of how I handled that final mile, which had started to go south, but then I rallied. I re-united with Greg, caught my breath and then did a 10-minute cool down. No vomiting!  Greg and I then drove to a coffee house in Vienna where we had breakfast (I guess I had two breakfasts!). 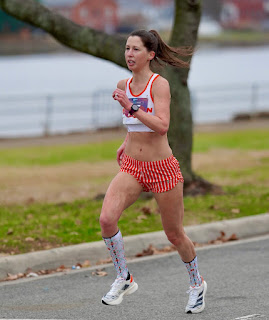 Final Thoughts and Key Takeaways
I think I executed this race well, and the reason I wasn't able to run what my 10K predicted was because I haven't been doing many 5K- specific workouts. I have done a few of them, but not enough to be able to move into that higher gear for an entire 5K. My 10K pace from 3 weeks ago was 6:35, and my average pace today was 6:30. So I think it's a matter of getting my legs more used to moving quickly and tapping into that VO2 Max.

Note: My overall time was 6 seconds slower this year, with my Garmin reading 3.14 vs. 3.13. And I think when looking at something so minute there is definitely a margin of error, or maybe I ran a wider tangent. But it's close enough that I consider it to be pretty much the same result - I am not sweating it!

That's the fun thing about running, you can never perform a true apples-to-apples test. So the jury is still out regarding my opinion of carbon fiber plate shoes in the 5K.

I'm running a 5K on New Year's day, but that's a hilly course and the weather is obviously TBD. All things being equal, I should run a slower time on New Year's day-- but now I have this experience under my belt so that will definitely help no matter what the day brings! 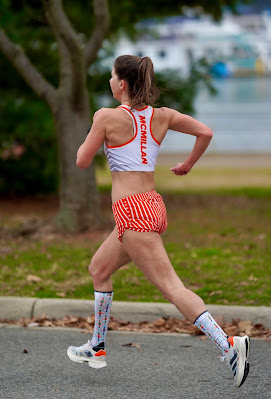