Keep the P in PR

Personal Record. Or, Personal Best if you are in most places outside of the United States. This concept of a PR or PB (we'll use PR for the sake of this blog post) is what motivates many runners to do what they do. We want to see progress. We want that feeling of knowing that we're fittest and faster than we ever have been before. The feeling that all those early mornings and hard workouts somehow "paid off" and we have proof of it.

Now that social media is intertwined so heavily into our lives as runners, and real-life running communities are developing and growing, I think we've lost the P in PR. A personal record is just that, personal. 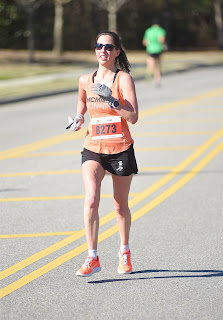 When I was working with a sports psychologist and heavily frustrated over my lack of PRs, he encouraged me to be less rigid in what I define as a PR. He told me I could have as many PRs as I wanted:

When you've run over 100 races like I have, and have been doing it for 12+ years, you'll probably only set a distance PR when the race has ideal weather, the course is relatively flat, and you're able to run the tangents (26.2 miles instead of 26.4, for example). Should you be robbed of all the PR glory I talked about above just because the weather sucked? Or the course was difficult?

The great thing about a truly personal record is that you define the criteria. I'm a data junkie so I like to track pretty much everything. I have a list of official records (if you're on a desktop PC you can see it in the right column) but I also track personal records for varying circumstances. Let's take the recent Boston Marathon for example.

Comparing last month's Boston to my official PR marathon of Myrtle Beach, I quickly realize this is a case of apples and oranges. I ran Boston in 3:26:53 and Myrtle Beach in 3:21:54. Let's break it down:


Officially, my record for fastest marathon is 3:21:54 at Myrtle Beach. What do I consider my personal record for best marathon performance? Boston. There were so many more obstacles and the race was less about fitness and more about strategy. I had a strategy for what I would do in athletes village. I had a strategy for my outfit and for changing my shoes before the race start. I had a pacing strategy that was specific to the course and the windy conditions. Boston was also more about attitude. It's easy to run fast when you leave your hotel room 30 minutes prior to race start with near perfect weather and the course is flat. I didn't need my mental toughness skills as much on that day.

Personally, I think my best marathon accomplishment is Boston. And, it's actually my fastest BQ margin, considering I am aging up for the 2019 race. My former self would have speculated on what I could have done if the weather weren't so horrible. But the time for that speculation was when I was training and setting goals; before the forecast came out. I had been targeting a 3:15-3:17, but I was able to accept my new reality once I learned what I would be facing. I got over it pretty quickly.

Another example is the 10-mile distance. My official 10-mile race PR is 1:10:24 and when I ran that I was slightly disappointed. I had been trying to break 1:10:00, and I believed I had the fitness to do so. Weather conditions had been perfect but for whatever reason I just wasn't able to run what I believed I could have. On the other hand, when I ran a 1:13 at the Army 10-Miler in 74-degree, humid weather, I was elated with my performance. I typically don't run well in the heat, but I started out really conservatively and was able to run a huge negative split, passing loads of people in the second half.

Another great thing about personal records is that you can have them for training runs. I used to get frustrated when I would run really fast paces in training and then my official results wouldn't line up. I needed to learn to embrace the training PRs, and to have patience that the fast race times would naturally follow. I was really excited when I ran 19 miles with 15 at marathon pace, and marathon pace averaged 7:21. I didn't feel like I was straining at all! I felt like that run showed me that I had brought my fitness to a new level.

My former self would have been really upset that my actual marathon pace was much slower, but I'm not upset at all. I know what I am capable of and that's super rewarding. Would I like an official race pace of 7:21? Sure! But I need good weather, a flat course and easy logistics. Only 2 of those 3 are in my control.

As the summer approaches, I am gearing up to run a bunch of 5Ks. Most will be hot. Some will be flat, others will be hilly. I'll be able to run the tangents at some of them, for others, I won't. The coolest, flattest, and most direct 5K is going to be the first one, when I am least conditioned to race that distance. And the hilliest, curviest, hottest and humid 5Ks will come once I've had a few months of 5K training behind me. So, as I embark on this journey I need to keep the personal in personal record. I define the criteria. What I'm trying to accomplish might be completely different from what someone else is trying to accomplish. I may technically be racing hundreds of other women, but I know that each of us has our own purpose.