After my clever title for yesterday's post, I am fresh out of creativity today! As the title states, I ran the Potomac River Running Fall Classic 10K this morning. It was the inaugural running of the race as the "Fall Classic" although that course is used multiple times throughout the year as other races. I had never run this course before, although I had run a 5K that overlapped with some of the course. 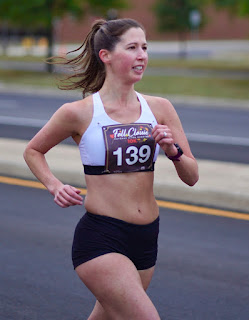 Even though I was registered for the Boo! race, I decided earlier this week to switch to the Fall Classic. Here's why:

All of this being said, I figured that my time would be slower at the Fall Classic due to the curvy nature of the course and the Garmin likely reading more than 6.21. But, since didn't think I would PR in warm, humid weather, I figured that time didn't matter as much as the other things.

Anyway, my race was 62 degrees with about 85% humidity. Dew point 57. I think it only ended up being like 2 degrees warmer in the city, but whatever, I had made my choice. This race wouldn't be about my finish time but about effort and execution. I was kind of sad about this because I do believe myself to be in shape for a PR. And I don't often run 10Ks. My PR is from February 2017, so I feel like it has overstayed its welcome.

I did not, however, rule out the possibility of a PR, I was just being realistic. I was still going to run as hard as possible. But that looks a lot different in 62 degrees vs. 22 degrees.

Before the Race
As I said earlier, this race is pretty easy in terms of logistics. It was a 20-minute drive, followed by packet pickup at the running store. Greg wasn't running the race but he did run the warm up with me. I warmed up for about 1.5 miles on what I thought was the end of the course. The course is a loop, and I had studied the course map beforehand. As I warmed up, I was mentally preparing myself for this route to be the finish. As I warmed up, I drank my Generation UCAN.

I then went back to the car and changed shoes into my Nike Vaporfly Next%. Followed by going to the porta potty, and then running another half mile in the Vaporfly to get a feel for them. Previously I had written about the Nike Vaporfly 4%. I didn't love this shoe because the fit was sloppy. So I tried on the new "Next %" at the running store, and they fit so much better. Then, I tried on the original Vaporfly to compare. At that point, I realized that I could slide the original Vaporfly off of my foot without untying them! I figured I probably shouldn't run in a shoe that was so loose it would slide right off even when tied tightly. So I bought the Next % and used them in this 10K.

Soon it was time to line up. I saw my friend Lisa at the start line and we chatted briefly before the gun went off.

Miles 1-2
Based on the elevation profile, I wanted to run these miles at goal pace, or maybe slightly slower. There were some gently rolling hills but nothing major. One woman shot out ahead of me, but I didn't see any others so I was pretty sure I was in second place. These miles were a little windy. The
headwind was annoying, but it also had a cooling affect so I didn't mind it too much. I focused on staying relaxed and settling in.

When I came to mile marker 1, I had already run 1.05 miles according to my Garmin, so I hoped that the marker was simply misplaced. But then when I hit the second mile marker, my Garmin was still ahead on distance, so I was mentally prepared for my Garmin to yield more than 6.2 miles. But I knew this going into the race based on Strava data and the curvy nature of the course.

Miles 3-4
I was content with how I handled the first two miles. Ideally they would have been closer to 6:45, but I still had four miles to go, and anything could happen. Shortly after I hit mile marker two, there was a water station. I poured an entire cup over my head in an effort to cool down. I wasn't "hot" per se but the air was thick and sticky.

I knew that these miles would both be net uphill, so I needed to stay strong. I maintained my placement; nobody passed me and I didn't pass anyone. I had no idea how far behind me the third female was.

Miles 5-Finish
I did not get discouraged by how slow miles 3-4 were, as they were uphill. However, I was envisioning them being closer to 6:50. The good news was that the final two miles would be net downhill.

But first, we turned into a neighborhood, ran about 0.05 miles into it, did a hairpin turn, and came back out. I guess they needed to add 0.1 mile somewhere, and this is where they did it? It was super annoying but it wasn't a surprise as I had studied the course map. At that point I was kind of wishing I had run the race in the city, but then I wouldn't get my nice downhill finish!

I was confused at the very end because we didn't finish like the course map had indicated. We didn't turn where I expected to turn so that threw me off a little. But ultimately that meant fewer turns overall, so I think it was for the best.

My original plan was to run these miles hard and go sub 6:40. I did run them hard, but sub 6:40 wasn't happening. I was at a point where I was struggling to maintain my effort.

After the Race
Before I had a chance to mentally process the race, I knew I needed to do the post-race workout prescribed by my coach. He wanted me to stop for no longer than 5 minutes, and then do a Fartlek of 3 x (3 mins, 2 mins, 1 mins) all with 90 seconds of steady running in between. Wow. Greg, who had been taking photos, went back to the car with me and I changed out of my Vaporflys and into the adidas which I had warmed up in.

I thought there would be no way I could run fast after just finishing a 10K, but I was pleasantly surprised:

I stopped after two sets because my legs were toast. I think that was the point, as this is part of marathon training. But I have my limits! All of that yielded an extra 2.62 miles at an average pace of 7:58. The awards ceremony started about five minutes after I finished, so I was glad I stopped when I did.

Final Thoughts
I feel good about this race. It's annoying that the weather was what it was, especially since yesterday morning it was in the low 50's at 8:00. But I can't control the weather and I made the best of it.

I missed my PR by 1 minute, 1 second. But considering this course was "longer" than my PR course, the pace was about 6 seconds per mile slower. So, kind of close, which is good.

Before the race I had looked at Strava data from about 5 different runners on this course. The distances ranged from 6.25-6.27. I paid very close attention to the tangents so I think I ended up with 6.29 because this course was different at the end then what the Strava runners ran. Plus, as I said, the
mile markers seemed off from the very beginning. I don't really care though, since I wasn't going to PR. My point is that my pace is closer to my PR pace than my time would suggest.

Greg wanted to look up the Boo! Run for Life 10K results and find out what the winning time was. I told him not to. If my time was faster than the winning time, I would probably be kicking myself. I made my choice to run the hillier, curvier, "longer" course, and I'm good with it.

I'm very hungry for a PR. I think I'm in excellent shape, but I don't really know since all my tune-up races have been in 60+ degrees.

I like the Vaporfly Next % much better than the original version. I don't think they made me a ton faster in this 10K than I otherwise would be, but I could see how they would really help during a 10-miler and longer. I'll probably continue to wear them in future 10Ks, but I think I have settled on my adidas Adios for the 5K distance.

Next up is the Columbus half marathon in two weeks. Please, PLEASE, let there be good weather. The half marathon PR is also dated: January 2018. I think sub-1:30 might be too ambitious but I think 1:30:xx is totally in the cards if the stars align. 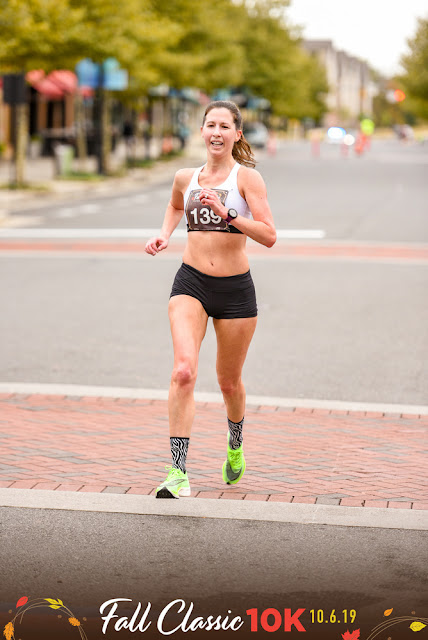