How did that happen? All of a sudden the marathon is so soon. I realized that I hadn't posted much about my training, so here's and update.

Post-Race Illness
The day after the Lower Potomac 10-Miler, I woke up quite ill. Only a runner would think, "Yes! That explains why I ran the race slower than I expected to!" So in a sense, it was good news because I had been feeling like the race result indicated I wasn't in as good of shape as I had believed. But with my history of prolonged illness, there was also a huge worry that I would be out for weeks. My main symptoms were extreme fatigue and dizziness, similar to what I experienced when I was sick over the summer.

I did not run or go to work on Monday or Tuesday. On Wednesday I started to feel better, which was a huge relief, so I took a short walk around the neighborhood instead of running and was able to go to work. By Thursday, I was feeling mostly normal, so I ran an easy 10 miles. What a huge relief.

I think I got sick not because of the race, but because my immune system had been weakened by multiple workouts in the heat/humidity. It was in the low 70's with 100% humidity for the first two weeks of October. And even though I know that's a danger zone for me, I kept thinking "this will be the last time because it's going to get cooler" but it didn't. So I ran warm workout after warm workout at high effort levels and my immune system caved.

As for the foot with the Morton's Neuroma, it hasn't been impacting me. I feel it on some days more than others, particularly when I run long. I hope it doesn't become a bigger issue and that the shots will help it go away entirely.

Marathon Training Begins
Thankfully I recovered, but started to feel woefully behind in marathon training after having missed 3 days, and not having run the same mileage and long runs as I did when I was training for Boston. My coach did this by design, though. His theory (and I totally believe it) is that you really only need six weeks of true "marathon training" with long runs, high mileage, and long workouts. In Boston I had a longer ramp-up, but when I look at my mileage, there were really only six weeks of super-charged training, with mileage in the 70+ range. Plus, it would have been difficult for me to run really long/hard workouts any earlier in the season, given the extended summer.

As I said above, I ran 10 easy miles on Thursday of last week, and then 8.3 miles easy on Friday. Greg and I took a train to New York City on Friday, so we were able to run in Central Park. We saw the musical Wicked on Friday night, and then did the long run in the park on Saturday. There's something magical about running in Central Park. Both last weekend and back in February, I had a totally indulgent meal (including a cocktail) the night before, stayed up late seeing the show, didn't sleep well, but somehow managed to run really strong in the hilly park.

The plan called for a 2-hour run, starting at a pace of 8:30 and progressing down to 7:45 for the first hour and 40 minutes. And then for the last 20 minutes, running at a pace of 7:00. My Garmin lost its signal in the park, and was telling me I was going much slower than I was, which of course resulted in me running faster than planned.

Greg was with me and his Garmin was working. He told me I was going too fast, but I was stubborn and ran the first hour and 40 minutes at a pace of around 7:50, according to his watch. Greg let me run ahead for the last 20 minutes, which I think averaged somewhere around 7:10-7:15. I probably could have hit the 7:00 if I didn't over-run the first 1:40, but oh well, it was still a strong run. Based on Greg's Garmin and my assessment of my effort for the last 20 minutes, I think I ran 15.45 miles at an average pace of 7:46. And it felt really good.

I ended up with 39.5 miles for the week, which isn't bad, considering I took three days off entirely for illness. Here are a few more photos from the trip to NYC: 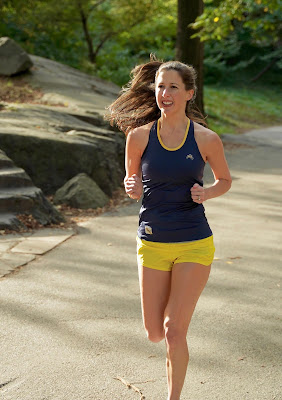 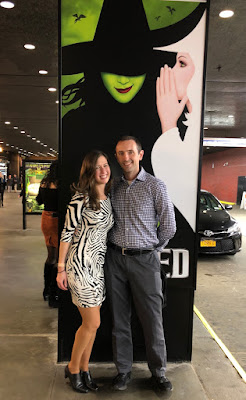 Week of October 22
On October 8th, it was 71 degrees and humid for my track workout. Two weeks later, it was down to 30 degrees and it stayed in the 30's in the mornings for most of the week. I am not complaining about the cool weather, but it's a shame to miss running in the 60's, 50's, and 40's. I had bought a few new tank tops for the fall season that I still haven't had the opportunity to wear!

Thursday: Wave Tempo
Back to the track for an 8K tempo run, alternating the pace each kilometer (2.5 laps for each). This was a continuous run with no stopping or recoveries. I had done this same workout last December and loved it. I was obviously hoping to be faster this time. Last time I did this I was 3 weeks out from the Houston Half, which is my PR. And now I am about two weeks out from the Richmond Half, so I was kind of using this workout as gage to compare my fitness now to my pre-Houston level.

Saturday: Long Run
A Nor'easter blew through, bringing strong winds and rain. At temperatures in the upper 40's, I was 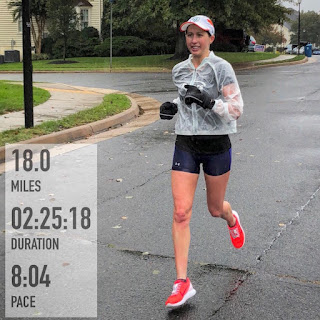 chilled to the bone. Originally, Greg and I planned to take a trip to Rehoboth Beach to do the long run on the actual course. About half the course is run on a packed dirt trail and I wanted to experience that before racing on it. But being on the coast, and up north, the area was forecast to receive winds of 20-30 mph, gusting up to 50 and very heavy rains. It wasn't much better here in Virginia, but I figured the weather would be enough of a challenge without also trying to figure out how to navigate the course and run in mud.

Sunday: Recovery Run
I ran easy for 60 minutes, which was 6.9 miles at an average pace of 8:41. I was pleasantly surprised that I didn't notice any lingering leg soreness or fatigue from the previous day's long run. Usually my recovery runs are in the 8:50's, but this felt more like a typical easy run.

My overall total for the week ended up being 68.7 miles.

I'm much more optimistic about my fitness and upcoming half and full marathons than I was in my previous blog post two weeks ago. I think I just needed for the weather to turn because my body performs well in cool temperatures and struggles in the heat.