After having run three races as training runs this summer, I was itching to race something full-out. Since getting sick for six weeks last June (combined with my history of summer illness) my new rule is to not fully exert myself in warm and humid weather. But today it was finally cool enough to race!

This race has been on my schedule since July. I knew I would want a "comeback" 5K once the weather got cooler, basically just to practice racing again, so this was it. This race used to be an 8K in
Washington DC. Now it's a 5K in Alexandria, VA. I ran the 8K back in 2011 and really enjoyed it, so I figured I would check out the 5K.

On Monday of this week, the weather for the race was looking iffy. The forecast called for 70 degrees with 95% humidity. I briefly contemplated bailing out, but decided I wouldn't make any decisions until the forecast solidified. As the week progressed, the temperatures dropped, and rain crept its way in.

In terms of goals, I wasn't quite sure what to expect. On the one hand, I hadn't been doing any 5K-specific workouts. I had two hill sprint sessions under my belt and a few short fartlek sessions (timed road intervals). But that was it. My hard workouts had been primarily focused on building lactate threshold, running between marathon pace and half marathon pace. None of these workouts were good race predictors, particularly at the 5K distance. My best-case-scenario goal was to be very close to my PR (20:17), but realistically I expected somewhere around 20:30. I definitely wanted to be sub 20:45, and probably would have been disappointed if I didn't hit that goal.

Before the Race
Race morning arrived, and I had everything set out as usual. I ate my typical english muffin with peanut butter, and mixed my UCAN with water to take 30 minutes before race start. Greg decided not to run this race, so he went as my cheerleader and photographer. When we were about 10 minutes
into the drive, I realized I had left my UCAN on the kitchen counter. I had had it in my hand, but had briefly set it down and didn't pick it back up again. I was really frustrated with myself for this because I literally had the bottle in my hand right before we were about to leave. Oh well, I had run plenty of 5K races without UCAN before, and at least I had eaten my breakfast.

It was raining pretty heavily when we arrived. I didn't bring a top layer to warm up in and I was soaked waiting to get my bib. I pinned it on inside the car and soon it was time to warm up. Once I started running, I literally warmed up. It was about 62 degrees with a slight breeze. The rain let up slightly during my warm up and I hoped it would remain light throughout the race and not be coming down in buckets. I've raced two 5Ks in pouring rain and it definitely added an extra layer of challenge. I've also raced half marathons and full marathons in pouring rain, and I think it posed less of a challenge at those distances, because you're not going so fast that you worry about slipping on something.

I warmed up for 2.5 miles, which included some strides and drills. I then met up with my friend Cheryl, who was running, and Allison, who was spectating. We headed to the start line and started scoping out the field. Cheryl and I were the only two women up front, but we were soon joined by a woman in a Boston Marathon shirt.

Mile 1: 6:34
The race started and things felt pretty good. The course is mainly flat, with the first mile being a slight decline of 14 feet, according to Strava. I didn't have my normal "pep" off of the starting mat, so I
figured I would ease into my pace and just focus on staying relaxed. The woman in the Boston shirt shot out ahead and was probably about 10 seconds ahead of me. I didn't realize it at the time, but looking at the photos, I learned that I was running alongside another woman. About half a mile in, I realized that the Boston-shirted woman was running about my same pace, and wasn't widening the gap any further. When my Garmin beeped a 6:34 mile, I didn't really have any emotional reaction. Initially I had planned to go out at a pace of 6:28-6:30, but things felt hard enough.

Mile 2: 6:39
It was during this mile that I realized that I didn't have a lot of pep. I had a positive mindset and I was telling myself to push and reminding myself that I could run faster, but my body was locked in at the pace it was going, and I couldn't convince it to move any quicker. This course is an out-and-back and I slowed almost to a walk at the hairpin turn, due to the pavement being wet. Thankfully, the rain was pretty light, and not the downpour I had feared. I remained in second place throughout the mile and believed that my position was locked in.

Mile 3: 6:36
Shortly after the second mile marker, the Boston-shirted girl ahead of me stopped running. She pulled off to the side for some reason. I continued on at my steady pace, still not able to convince myself to push any harder, and she resumed running about five seconds later. The gap between us was now a lot smaller-- probably 4-5 seconds. Still, I doubted I could catch her because I felt like I couldn't go any faster. I really wanted to catch her, but I didn't think it possible. But about half a mile later (about 2.5 miles into the race) she stopped again. I hated to be opportunistic since she was obviously hurting, but I figured since I was going to pass her, I might as well do it so quickly that if she were to start up again, she wouldn't believe that she could catch me. I somehow found another gear and pushed harder and ran faster as I passed her. She said something encouraging to me and I grunted back, as that's all the energy I had for communication.

I held a steady pace until about a quarter mile from the finish line. At that point, a spectator yelled that another woman was right behind me. Shoot! That meant I had to push harder, I simply had to! I wasn't going to lose the win in the last quarter mile. So, I somehow found it in me to rally more energy, which had previously been lacking, and I sprinted my way to a win in 20:34. I later learned that the second place female finished 8 seconds after me, and was not the woman in the Boston shirt who had stopped. According to my Garmin, I ran the last 0.13 at a pace of 5:52. 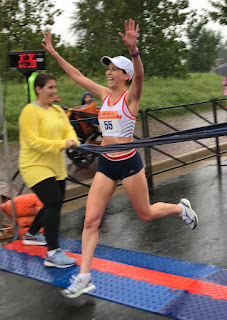 After the Race
I watched Cheryl finish about 30 seconds after me and then re-united with Greg and Allison. I then approached the Boston-shirted woman and asked her if she was okay. She said that she had just run the Berlin Marathon the previous weekend and was fighting an illness. She ended up placing third, which is a huge accomplishment considering she had to stop!

I then cooled down for two miles with Cheryl. We proceeded to collect our awards and then headed
for brunch. I won a bobble-head trophy and a gift certificate to a local restaurant.

Final Thoughts and Takeaways
I really wish I hadn't left my UCAN fuel at home. I lacked "pep" in this race, despite a significant taper and I think that's the culprit. However, I don't know for sure, and my result could have been the exact same if I had taken the UCAN.

I think that unless I am training specifically for a 5K, then I don't have the ability to shift into a really high gear- both mentally and physically. If this had been a four-mile race, I think my average pace would have been exactly the same. I felt like I could have continued on at that pace for quite some time, but I just couldn't bring myself to go much faster. I often feel this way in 5Ks when I am not training specifically for them. According to the McMillan calculator, this race predicts a 1:11:23 10-miler, but I'm pretty confident in my ability to run sub-1:10:00 in two weeks.

I don't have any training runs or races that indicate a sub-1:10:00 is possible, but my gut tells me I am in better shape now than when I ran my 1:10 PR in the spring of 2017. The 10-miler is also my sweet spot and the distance that I think I race the best.

It was a really nice pick-me-up to get a win and to break tape. Particularly after having taken so much time off this summer. But I'm still hungry. I'm hungry for 60+ mile weeks and PRs and the cool weather that makes those possible. I feel like I've been on the verge of being back in full swing for a while now, and I'm anxious to actually BE back in full swing.