My Week in Shoes

As I've mentioned previously, I am running the Rehoboth Beach marathon on December 8th. This means that I am not officially marathon training yet, rather I'm preparing to train for this marathon.  This means that I am building the strength and endurance to be able to handle 70+ mile weeks, with 3-4 quality workouts each week. That type of load is not sustainable for more than 6-8 weeks, so I
spend the weeks prior to that preparing my body for what's ahead.

In this blog, I will recap my past week of training with a fun twist: I'll talk about the shoe I wore each day. Nike has discontinued the Lunarglide, my go-to long run and marathon shoe for the past 5 years, so I have had to make some adjustments. Additionally, I suspect that I no longer need stability shoes.

The Nikes are "light stability" and some of the shoes I wear for speed work are neutral, and I do just fine. I've looked at photos of myself running in neutral shoes and I see no pronation, so I am going to see if I truly need stability or not. There's nothing wrong with a stability shoe, but if I don't need the extra support, it makes the universe of wearable shoes much wider.

My main requirements for a shoe are:

I typically buy the previous year's shoe model because they are almost always on sale somewhere and it saves me a lot of money over time. The only time I buy the current model is if it's a newly released model, like the Nike Odyssey React or the Boston 7 with the beautiful design. I cannot wear any shoe made by Hoka, Altra or Saucony because all of their shoes have an 8mm drop or lower. 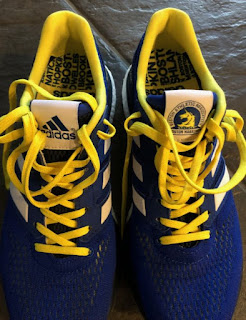 I wore the adidas adizero Boston 7. The only reason I purchased this shoe is because it's so beautifully Boston. It's blue and yellow with a unicorn on the heel, and even the insides have the names of all the towns you run through. I bought three pairs of these shoes because I loved how "Boston" they were, and I figured when I was done running in them I would use them as walking shoes. Aside from the looks of the shoe, it performs well. It's designed to be a lightweight trainer for faster workouts than can stand up to longer distances. It worked well for me on Monday, but during the final cool-down mile, I noticed that my feet were starting to ache. Therefore, I probably would pick a different shoe with more cushion for a half marathon or full marathon race.

Note: the adidas has a stability version of the Boston, called the Tempo. I think I prefer the Tempo because it has a little more spring. I've worn them in two half marathons and my feet have felt great. I was disappointed, however, when they came out with the Tempo 9, which is noticeably heavier and bulkier than the Tempo 8. I haven't run in the 9 yet, but when trying it on, I didn't love it. Thankfully, I have two brand-new pairs of the 8 that I stocked up on. Here is another picture of the Boston 7 from the back: 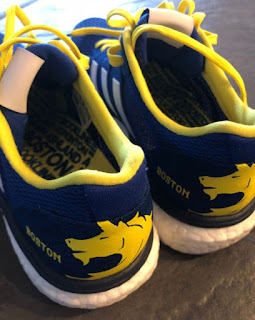 Tuesday: 9 miles easy-ish in the Nike Odyssey React
During marathon training, my coach gives me a medium-long run on Tuesdays. Later in the cycle, he wants me to run this at a quicker pace (around 7:30-7:45). So he's starting to ramp up the distance already. I was prescribed 75 minutes easy, and I ran them easy-ish at an average pace of 8:20 for 9 miles total. I felt good and I figured I should start preparing for these Tuesday runs to get faster. Even though it was back up to 70 degrees and muggy, I felt energized.

The Nike Odyssey React is the supposed replacement for the Nike Lunarglide. I think they are entirely different shoes. The Odyssey React is much lighter and according to my kitchen scale, is the lightest shoe I own. Even lighter than the shoes I race 5Ks in (adidas Adizero Adios). I absolutely LOVE the ride of the Nike Odyssey React and how they feel. They are bouncy and soft and fun. I actually look forward to putting them on my feet. However, I'm not sure they are the workhorse of the long run. Even though my feet had enough cushion for 9 miles, I'm not sure how they'd feel at the end of a 20-miler. The Nike Lunarglide had more "stuff" between my foot and the ground.

But. . . I am considering using them as my marathon race shoe since they are light and cushioned. My plan is to continue to use them on the Tuesday medium-long run, and then on some longer marathon-pace runs. If all goes well, then they will be my marathon race shoe. If not, then it's the Nike Lunarglide for Rehoboth and back to the drawing board for future marathons.

Wednesday: 6.8 miles in the Mizuno Wave Inspire 13
This was an easy day: 60 minutes at an average pace of 8:48. I kept it easy, given the two harder runs on Monday and Tuesday.

I've been wearing the Mizuno Wave Inspire for about 7 years. I've always liked the firm feel, but they have always hurt my feet after about 7 miles, so I have never worn them for long runs. Lately, they have been hurting my forefoot even more. My feet start to hurt about 45 minutes into the run pretty badly, and then continue to ache for the rest of the day. Not good. This has been going on for about three weeks, so I think I need to stop wearing the Inspire. Maybe I have a defective pair, but given the fact that they have never felt great on my feet past 7 miles and I don't think I need stability, I'm ready to part ways with them. They also keep changing the shoe each year. I think version 11 was my favorite because it was flexible and light, but the other versions haven't really impressed me.

I plan to replace the Inspire with the adidas Solar Glide. This is a neutral shoe with lots of cushion that I think could be a good candidate for both easy runs and long runs. It's a little heavier and wider than I would ideally like, but I'm going to give it a chance.

Thursday: 7 miles (including hills) in the Mizuno Wave Elixir
Hill workouts work wonders. I don't particularly enjoy them, but they have multiple benefits. First, they make your legs stronger and more able to handle a heavy training load. I don't do any strength training on my legs, so hills are particularly important. Running them hard for a short duration is also a great VO2 max workout. This workout was 10 x 1-minute hills with the jog back down recovery. My hill was about 30 feet over a distance of 0.15 mile. I performed this exact same workout last week and it didn't go that well. I was only prescribed 8 reps last week, and I was dead by the last one, having to go significantly slower. This week, my paces on average were 20 seconds per mile faster (6:30 vs. 6:50) and I was able to do 10 of them without feeling completely wiped out. On both occasions, the weather was hot and humid, although this week was 72 degrees and last week was 74. Both of which are unseasonably warm for an early September morning.

The Mizuno Wave Elixir is a lightweight stability shoe that was discontinued about 4 years ago. I was so in love with this shoe that I bought 8 pairs when I heard the news. I'm on my very last pair now. I still like them quite a bit, but I prefer the adidas Adizero Tempo 8.

Friday: 7.8 miles in the Nike Lunarglide 8
My coach bumped up my Friday run from 60 minutes to 70 minutes, and my legs were super tired from the hills the day before. I kept it super easy at 8:53 average. And of course, it was a steamy, muggy 72 degrees.

As I said above, the Mizuno Inspire begins to hurt my feet after 7 miles so I wore the Nike Lunarglide for this run. Now that the Lunarglide has been discontinued, I would ideally reserve this shoe for long runs only, and not "waste" the mileage on a shorter easy run. But it was my only option because the adidas Solar Glide shoes had not yet arrived, and I didn't want to wear a speed work shoe.

Saturday: 14.3 miles in the Nike Lunarglide 8
This week's long run was 2 hours. As usual, I started out really easy and gradually progressed to a moderate effort by the end. I ran the first hour at an average pace of 8:39, and the second hour at an average pace of 8:09. My overall average pace was 8:22. This run felt okay. Tolerable. Manageable, but not great. I wasn't hurting or counting down the minutes for the run to be over, but I also didn't feel peppy or energized. But, as my coach said, that's to be expected in this kind of weather. And, when I looked in my training log, I noticed that I had run over 58 miles in the previous 7 days, which is a big jump. Hopefully this is the last long run I will do in the 70's this season. At least it was overcast, and 8:22 was my long run pace in cool temperatures less than a year ago, so I've made progress.

I normally don't wear the same pair of shoes on back-to-back days, but as I said above, I didn't have much choice other than the Lunarglide for Friday. The shoe, which is nearing the end of its life, held up great. A light shoe that has plenty of cushion for the long haul and is super easy to run in. No extra bulk, and it fits like a glove. I will miss this shoe. The Nike Lunarglide replacement, the Odyssey React, also seems to be a great shoe, but I would put it in a different category. I don't think it has enough "stuff" to be my long run shoe.

Sunday: 4.4 miles in the Mizuno Wave Inspire 13
Easy recovery run at an average 8:56 pace. It was a chilling 67 degrees!

I wore the Inspire again, even though I dreaded it hurting my feet. After three miles, the ball of my right foot was aching and I later discovered a major callous forming there, which is good. My new adidas Solar Glide shoes should hopefully arrive early next week so that I won't need to wear the painful Mizunos again.

Final Shoe Thoughts
I'm excited to be transitioning to a neutral shoe, and I hope the adidas Solar Glide is everything I expect it to be. I'll review it once I've had it for a few weeks. I should have stopped wearing the Mizuno Wave Inspire a few years ago, but because I've been injury-free, I was hesitant to make a change. I'm sad to see the Lunarglide go, but happy to add the Odyssey React. I didn't wear the adidas Adios or the adidas Tempo this week, but those are nicely fitting lightweight shoes for speedwork and racing.

Final Training Thoughts
My total mileage this week was 59.5, which is quite the jump from the previous two weeks. I had been hovering in the low 50's. Everything has felt good, and I've been energized overall. I've been sleeping well and hydrating well, so that has definitely helped. I'm only three weeks out from the Army Ten Miler, and it's crazy that I really don't know what kind of shape I'm in-- on the off chance the race will actually be cool! I think sub-1:10:00 is not that aggressive of a goal, considering I have already run 1:09:45 in a half marathon. But it would be a nice official PR and milestone. If all the stars aligned, I think I would run somewhere around 1:09:00.