Now that I have run over 50 5K races I can confidently say that it does not get any easier. In fact, it feels like it's getting harder for me. 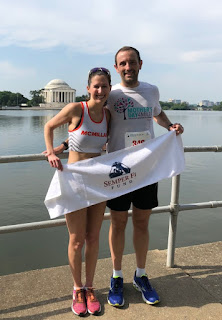 Am I saying this because I'm just coming off of a marathon training cycle and I'm not used to running hard and fast? Maybe. I think that today's race gave me a new perspective on the 5K distance. I'm not discouraged by this perspective, but I think I have a bigger challenge ahead of me than I previously believed if I ever want to run under 20 minutes. Today marks the 1-year anniversary of my official fastest 5K time: 20:17. I've run about 7 5Ks since then and have not been able to go any faster. Granted, I have spent most of that time training for marathons, but at some point I really want to breakthrough this plateau.

Meanwhile, I haven't even raced a 10K in over a year. My fastest 10K and fastest 5K paces are only about 10 seconds apart, so I feel like I have much more opportunity in the 5K. But then. . . it's always harder than I expect.

This morning I raced the Semper Fi 5K in Washington DC. This is my third time running this race. As I said above, I ran my fastest ever time on this course exactly one year ago. The two big differences between today's race and last year's race are the fact that I haven't been training for the 5K distance (last year I had 6 solid weeks behind me), and the weather. It was about 10 degrees warmer this year than last. But still, I was hopeful that I would set a PR. I thought sub-20 was probably a stretch with the heat and humidity, but I really thought I could squeak under 20:17 based on how fast my track workouts were during marathon training.

Before the race
This race did not have race-day packet pickup like it has in years past, so luckily my friend Allison was able to get the bibs for Greg and me. Greg and I met up with Allison and Cheryl, pinned on our bibs, and warmed up to the start line. The race started at 8:30 which annoyed me slightly. If you aren't offering race day bib pickup, then can't you start at 7:30? I guess the race organizers wanted to offer the option of using metro as transportation.

We warmed up for just over two miles and returned to the start line at 7:20. We lined up, in the corral and starting chatting among ourselves. I noticed that it looked like the race was getting ready to start, even though it wasn't even 8:25 yet. And suddenly. . . HONK! The horn went off, catching everyone off guard and the race started five minutes early. 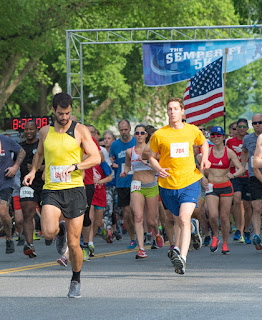 Mile 1
Still in shock by the early start, I realized I was thankful for even 5 minutes of slightly cooler weather. It was 70 degrees and humid, with partly cloudy skies. I went out at a pace of 6:25 and it felt really good. I thought to myself, this feels really comfortable and I will definitely be able to run this pace the whole time! I could tell that Greg was right behind me and I thought it would be great if we could stick together for the whole race.

Initially, there were two women ahead of me, but I passed one of them about 3/4 of the way through the first mile. I was now in second place. But then, a woman came up from behind and passed me as we approached the mile 1 marker. I assume she must have been one of the people who missed the start of the race and had to work her way up in the pack. I was once again the third female. My 1-mile split was 6:25.

Mile 2
Shortly after the mile marker, I felt myself slowing down, even though I was keeping the effort level
steady. And then I got a cramp in my chest. It was uncomfortable but I was able to still run through it. The race suddenly became very difficult. I pushed harder in order to try and maintain my pace but it was not happening. I was getting slower and slower but pushing harder and harder.

Greg was a few feet ahead of me at the turnaround point, and then he widened the gap even farther as we made our way back toward the finish line. I kept reminding myself that it was supposed to hurt and that hurt = happy, but it wasn't helping. I wanted to stop so badly. And I momentarily told myself I would never run another 5K again. I didn't think there was any way I would make it to the finish line. It took every ounce of mental strength I had to not stop and walk. And yes, this was still during mile 2! My split was 6:42. 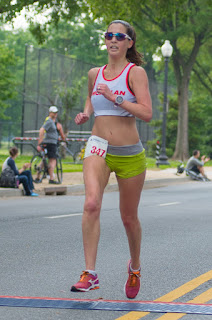 I tried to rally for the final mile, as that was part of my original race strategy. I wanted the final mile to be my fastest as it has been in years past. The best way to describe mile 3 is torture. I was in so much pain and even though I knew I wasn't going to PR, I told myself I had to "practice" the feeling of pain so that when my PR day arrived, I would be able to take full advantage of it.

I think success in the 5K is largely dependent on how much pain tolerance you have. I can be moderately uncomfortable for a long time in a half or full marathon. But I struggle to allow myself to feel so much pain, even for a short period of time. I decided I would salvage the race by practicing the act of continuing to give, give, give even when I felt like I had nothing to give. I logged a 6:47 split for the final mile. This was followed by a 6:25 paced run to the finish line.

After the Race
I felt like I needed to collapse after I crossed the finish. I found a nearby tree to lean on. And then it took 2-3 minutes to be able to talk to Greg, who had finished in 20:18. Thankfully, I was able to see Allison and Cheryl finish although instead of cheering I just waved my arms.

That was a MASSIVE amount of effort and quite torturous. And it got me a time of 20:40. Sigh. I have to admit I'm little bit discouraged but in a positive way. I have even more respect for the 5K distance so when I do finally break 20, it will feel like more of an accomplishment. I think that going sub-20 this summer will be a long shot, although not entirely impossible.

I'm pleased that I had so much "fight" in me this morning, as compared to the Crystal City 5K I ran in early April. During that race the last mile was into a headwind and uphill and I just didn't have the motivation to fight for it.

In hindsight, do I think I should have gone out slower? Actually, no. I think that the best pacing strategy is probably to go out hard and try to hang on. It was very difficult to hold on during the second half of the race so if I had started slower, it would have been even more difficult to motivate myself to run faster. I think I am going to have to keep doing that if I want to test my limits. It would be one thing if I totally crashed and burned like I did in Crystal City. But I held it together just well enough to not be crawling at the end.

After the race, we got our awards and did a cool down jog back to the car, followed by brunch.

To sum up the key takeaways:


Two more weeks of training and then I'll put myself through this whole ordeal again!
at 3:09 PM