Yesterday I ran my 12th consecutive Virginia Run Turkey Trot. I first ran this race in 2006 in a time of 23:32. It was my second ever 5K. It is now my longest standing running tradition together with Greg, who ran his 9th consecutive trot. 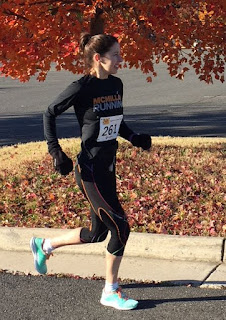 This race fell at an inopportune time. I had taken two full weeks off from running post-marathon to let my Achilles tendonitis heal, and when I resumed, my legs felt extremely stiff and heavy. I went pool running and swimming four times during those two weeks in an effort to maintain my cardiovascular fitness. Plus, I simply enjoy exercising and this was the most Achilles-friendly exercise I could think of.

I also continued to do my rehab exercises, which are simply heel drops using as much weight as tolerated. I discovered that I could add even more weight using the Smith machine at my office gym, and once I started doing that, I saw rapid improvement. In fact, I was 100% pain-free before, during and after my run on Monday. I wish I had discovered this machine months ago! I'll write another post soon about my Achilles tendonitis experience including what helped, and what set me back.

By the time Thanksgiving rolled around I was no longer worried about my Achilles tendonitis. Instead, I thought that my heavy legs might make it impossible for me to run fast, and there would be huge "bonk" potential. My legs felt like they were at mile 21 of a marathon during Tuesday's easy 4-miler, and I'm not exaggerating. I foam rolled and took Epsom salt baths after Tuesday's run in an effort to revitalize my legs, and hoped that they were just heavy from not having been used in so long.

Race Goals
Race morning arrived and I was excited to be racing. Given how horribly my marathon turned out, I wanted another shot at running hard, pushing myself, and staying mentally strong. Over the summer when I was doing specific 5K workouts, my goal was to be able to break 20:00 in the Turkey Trot. It was simply too hot to do that in the summer, but I thought that if I increased my 5K fitness in the summer months, it would stick with me during marathon training.

Many marathon training plans focus primarily on Lactate Threshold work and endurance, but my coach throws a healthy amount of short, high-intensity intervals as well. For example, I ran 15 x 1 minute hard, 1 minute easy, followed by 15 x 30 seconds hard, 30 seconds easy. And then a few weeks later I did that same workout but with 20 sets. Which comes out to a solid hour of constant on-and-off sprinting. With workouts like these frequenting my marathon training schedule, I thought that I had not only maintained my 5K fitness, but increased it.

I knew that I was in the best shape of my life in the weeks leading up to the marathon, and if I had raced a cool 5K back then, I think sub-20:00 would have been highly likely. So, on the one hand, I knew I was in excellent shape. On the other hand, I had taken two weeks off, and my legs had felt like bricks just 48 hours prior.

Before the Race
Greg and I have our "before the race" down pat! We know exactly when to leave the house, where to park, where to go to the bathroom, where to warm up, etc. We ran the warm up at a pace of around
8:35 and it felt more like 8:00. I actually felt really good, but I wondered if I was in for a slap in the face given that my easy pace felt "harder than easy"!

It was 32 degrees and sunny, so we warmed up with an extra layer over our long-sleeved racing shirts and then hung those clothes on a fence near the start/finish This was perfect racing weather for me, particularly since there was no wind whatsoever. What a contrast to all the crappy weather we had all fall!

Greg and I both planned to go out at around 6:30, but I knew that was highly subject to change based on how I felt. This course can be very fast if you know how to pace it. The first two miles are net uphill, and the last mile is net downhill. However, the first mile is gently rolling hills (starting with a downhill), whereas the second mile has a single large hill. And even though the third mile is mostly downhill, there are a few ups to keep you on your toes! In an ideal world, I like to run the first two miles at around the same pace, and then really hammer it home on the last mile.

Mile 1: 6:36
During this mile, I focused on just staying relaxed. Running so fast was definitely a shock to my system. I hadn't run at this pace in over four weeks, so my objective was to try and get into a groove that felt natural. Being a turkey trot, I had to pass a lot of kids during the first half mile-- the ones that go out at a pace of 6:00 for the first minute and then blow up. I'm so used to this now that I don't even see it as an obstacle.

Mile 2: 6:34
I was pleased with my pace for the first mile and feeling good, so I resolved to run the second mile at the same pace or faster. I was on track for this until the big hill came at the end of the mile. I told myself that a slow down on the hill was NOT inevitable, and I was going to maintain my pace no matter what. I decided to make myself hurt as much as possible, and do whatever it took to not slow down on that hill. Typically, my strategy is to run an even effort in races, not an even pace, but at this point, I wanted to push myself up the hill because I knew I'd be able to recover on the downhill. Plus, I was highly confident in my endurance. If I could just not lose any time up the hill, I'd be golden. And voila! I did it! It really hurt like hell the closer I got to the top, but I refused to back off the pace and it paid off.

Mile 3: 6:27
Now it was time to really gun it. I knew that I'd have to conquer two small pesky inclines, but aside from that, everything would be flat or downhill. When I was about 3/4 of the way through the mile, I glanced at my Garmin and it read a 6:34 average pace for that mile. This was not acceptable to me so I pushed even harder. I know that many people race better when they don't look at their watches, but for me, when a race is almost over, I find that looking at my pace can be a huge motivator.

The Last 0.14: (5:37 pace)
With the realization that I was going to run a really strong time, I gave it all I had to make it as strong as possible. 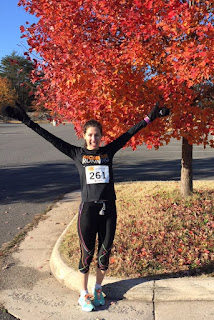 Usually during races, I am aware of the other runners and where I am relative to other women. But during this race, I was solely focused on myself. I had Greg in my sights the entire time (he ran 20:03) but otherwise, I wasn't overly aware of who I was passing or the people passing me. Because I was initially so uncertain about what would happen, I wasn't viewing this as a competition.

Anyway, even though I didn't break 20:00 I was pretty excited. My course PR was significant and I was delighted that I managed to maintain so much fitness. I titled this post "Turkey Trot Magic" because on Tuesday I felt ridiculously sluggish and heavy, but then I went out an ran a 5K at very close to my overall PR (20:17). It just goes to show you that running is truly dynamic-- some days you have it, other days you don't. It was also "magic" in that my Achilles were completely pain free before, during, and after the race. And running fast is pretty much the worst thing you can do with this injury. After the Leesburg 5K in August, I was in a lot of pain shortly after the race.

In terms of overall results, I placed 4th out of 989 women. This was a large turkey trot, so I was very happy with my placing.

Final Thoughts and Stats
I learned a lot from this race. From a physical standpoint, I think that running Monday-Wednesday really helped my legs get back into the groove of running. I'm at my best when I run 7 days a week, and take long breaks in between cycles. If I miss a day of running, I feel stale the next day. I run 30 minutes at a recovery pace every Sunday, which is enough to give my legs a rest, while keeping them used to moving. I also learned that even if my legs feel like garbage one day, they can bounce back quickly, provided I get enough sleep and do things like foam roll. Other thoughts and stats:

Within the course of just two days, I went from being discouraged about my running to very optimistic about kick starting the new cycle. My next race is a 5K on New Year's day, and I am now confident that I will be able to start training again without my Achilles plaguing me, and with my marathon fitness mainly intact.

More Stats!
If you don't care about data, you can stop reading here. But I geek out on this stuff, and one of the best things about having an annual racing tradition is to compare the splits year over year. Here's a fun chart: