Nobody Cares About Your Marathon Time

Other people don't care about your race times. And that's a good thing.

They may be interested in how you do. And they may even track you during a marathon! And if you have a coach, he/she is likely personally invested in your performance. But your race time is not going to change the lives of other people. Other runners care about their races times. Any interest 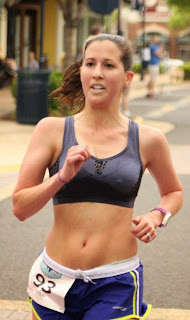 But what about the elite athletes who get press coverage? Or what about the runners who have tens of thousands of social media followers? People care about those race times, right? Not really. It's cool to scroll through the Instagram feed and see how people's races went. And it may be worthy of a conversation or two. But that's about the extent of most people's caring. I have nearly 10,000 followers on Instagram, and I don't think any of them lost sleep over my Indianapolis time. While I received an overwhelming amount of support from the running community, I know that my failure to meet my goal isn't going to change anything in their lives. And that's such a relief! Phew.

It's easy to understand this concept intellectually. Most people know that they shouldn't care about what other people think of them. For me, the real breakthrough came when I actually felt it.

Back in the summer of 2013, I was debating whether or not to run the Chicago marathon. I had been injured for five weeks, so I was deciding between doing it as a fun run, or just bagging the whole thing. Was I going to embarrass myself yet again with another relatively slow time? Would everyone think I was crazy for considering myself to be a BQ-caliber runner? But at that moment, I was able to "catch" myself and turn those thoughts in the other direction.I realized that I was making this decision primarily based on how other people (my running friends and teammates) would perceive my time.

And that's what caused the breakthrough to happen. I realized that my time was important to me, but it was really just a small point of interest to my friends. If I ran a slow time, they might think, "oh, Elizabeth didn't do all that well," but then they would go about the rest of their day, focused on other things. And if they thought "oh, Elizabeth didn't do all that well," would it impact my life? NO. Not one bit. Let them think it! Let them think whatever they want about me because it's not going to change the decisions I make, or how I feel about my running.

I've often been asked what the single biggest "a-ha" moment was in my journey to overcome race anxiety. It was this realization, which felt like like a heavy weight had been lifted off of my shoulders. It made me feel free to do whatever I wanted with my running. I was no longer afraid to run a slow time because of what other people might think. And my anxiety levels plummeted.

The stakes were now lower on race day. Every race became about my individual goals and my own unique journey. I was no longer trying to prove anything to anyone. And while I still cared about my race times, I wasn't worried about embarrassing myself if I ran slower than expected.

Learning to accept a missed goal is a skill in and of itself, but when you are ALSO worried about other people's judgments, acceptance is nearly impossible.

How does all of this relate to the marathon I ran two weeks ago?


It's easy to feel pressured on race day, particularly if you are active in the running community. But other people's judgments should be the least of your concerns. Because those people simply don't care as much as you may think.