As part of the 45th Running Celebration of Credit Union Cherry Blossom, we are awarding mugs that read "I would have won this race in 1973" to all males who finish faster than 1973 winner Sam Bair's time of 51:22 and to all females who finish faster than Kathrine Switzer's winning time of 71:19. You are receiving this message because the seeded time you entered on your entry form for the 2017 race is within two minutes of these times. This means if you have a good day, you could win one of these mugs, so we wanted to let you know about these special awards. 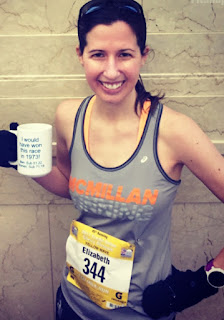 I received this email three days ago, and determined that I HAD to have one of those mugs.

Today was my 6th time running the Cherry Blossom 10-miler. I first ran it in 2007 in a time of 1:21:23 and my current 10-mile PR was on this course from 2014: 1:15:26. I had beaten this time during three half marathons, and during a training run, but of course, these weren't "official" PRs. Therefore, I didn't think I was being presumptuous by buying PR Cake ingredients last weekend. (Greg and I have a tradition of making PR cake with our times written on it.)

Background
Throughout 2009-2013, I struggled mentally with the marathon, but the 10-miler remained my sweet spot. Therefore, in 2014, when I ran a time that was very similar to my past two times, I realized I had also plateaued physically. That's when I decided it was time to hire a running coach. A few months later, I began working with McMillan Running coach Andrew and my times have steadily dropped ever since.

Ever since I ran a 1:33:36 half marathon last spring, I set my sights on a sub-70:00 10-miler. I was going to shoot for this at the Army Ten-Miler last fall, but I wasn't able to run it because I had just recovered from mono. Part of the reason I chose to run the Myrtle Beach Marathon was that I would recover in time to run the Cherry Blossom 10-miler.

I was excited to receive a "seeded" bib for this race: Bib #344. For a race of about 20,000 people, I
considered this to be a huge honor. It didn't come with too many perks, other than starting at the front of the race and being able to get an entry without going through the lottery. I wasn't sure if I would qualify for a seeded entry, though, so I got in through the lottery anyway and received the seeded bib afterward.

Before the Race
Because the metro wasn't running, Greg and I decided to get a hotel room in DC the night before. We could have probably reserved a parking spot in the city, but we live about 35 minutes away and we didn't want to have this added stress on race morning. Plus, having our own dedicated bathroom within an hour of the start time was nice!

For both the Myrtle Beach Marathon and Indianapolis Monumental, we arrived at the start line with just a few minutes to spare. I wanted to be more conservative this time, so we were in the corral 15 minutes before the start. This caused me much less anxiety! Greg and I both drank UCAN at 6:50, and at 6:55 we left the hotel and headed for the start line.

My plan was to go out at a pace of 6:50-6:53 and see how long I could hold it. I wasn't as confident about my ability to reach my "A" goal as I had been the week prior. On Thursday of this week, I ran a set of 8 x 200m and I felt really stale. In fact, by the end of the day I felt as if I was getting sick. I felt completely run down with a hint of a sore throat. I took an un-planned rest day on Friday, got plenty of rest, drank loads of water and was feeling decent by yesterday. Perhaps it was allergies. Perhaps I was still feeling the after-effects of the marathon. But whatever it was, I wasn't feeling nearly as peppy as I had been the week prior.

Anyway, shortly before the race started I ditched my throw-away hoodie and prepared myself mentally. I knew that miles 7-10 around Hains Point would be extremely challenging, and I told myself to keep pushing, no matter how hard it hurt.

Miles 1-4
The race started, and I felt decent. Not great, but okay. It was about 46 degrees, sunny, with a breeze.
I wore sunglasses, but the parts of the course that ran directly into the sun were difficult for me. All the runners in front of me looked like dark shadows and I could feel my face getting really warm. The race was surprisingly crowded. I remember spectating Greg at the Army 10-miler and he ran about the pace I was trying to go. And it looked like he had plenty of room around him when he ran by during mile 7. I found myself constantly weaving through people and it was difficult to get into a rhythm.

I had studied the elevation provide and expected the second mile to be slow, but surprisingly, it was one of my faster miles. My coach had advised me to push hard from the beginning and that's exactly what I did. It felt harder than expected to run the paces I was running, but I trusted that my marathon endurance would enable me to maintain these paces for 10 miles.

Miles 5-7
From experience, I knew that there was a moderate hill during mile six and that I might feel crappy at this point, but that it would feel better once I got to Hains Point at mile 7. There was a huge cheering crowd and it really energized me. I hit the 5-mile timing mat in 34:46, which had me on pace to run a 1:09:31. I was pleased with this and told myself to simply keep up the effort and I would reach my goal. However, it felt harder than expected. Based on last week's tempo run (4 miles at 6:49 average), I actually thought I would be able to run a sub-6:50 pace for this race. Additionally, I ran a 10K eight weeks ago on a very hilly course at a pace of 6:41 on un-tapered legs. So I really didn't expect these paces to be feeling as tough as they did.

During mile 7, I grabbed water from a water station and poured it over my head. And I noticed that I was definitely more comfortable in the shaded portions of the course. Sunshine and I just don't jive when it comes to racing. Unless it's below 40 degrees like it was at Myrtle Beach. I felt much better during mile 7 than I did during mile six, which (unbeknownst to me) was due to a tailwind on Hains Point. I felt like I had gotten a "second wind" and that I had my goal in the bag!

Miles 8-10.09
But then, we turned around and there was a headwind on Hains Point. According the forecast, this was supposed to be a 7 mph sustained wind. But it felt much stronger than that. I appreciated the cooling factor, but I felt like I was fighting a formidable opponent. I pushed harder and reminded myself that I needed to stay strong and give 100% effort. So I increased my effort level and gave it everything I had, and was unable to get my Garmin pace back down into the 6:50's. I wanted to stop so badly. I felt awful. Every part of me was in pain. Based on how I felt, I knew it was unlikely that I would come in under 70:00. But I wanted that mug! I knew that I would be super disappointed if I wasn't able to attain my B goal.

During these last few miles, all I could think about was the mug. I realized my sub-70:00 was unlikely but dammit, I was going to be drinking coffee out of that mug come hell or high water. Mile 8 clocked in at 7:02.

Get the mug! Get the mug! At mile 9.6 we turned off of Hains Point and there was a sizable hill that was about a quarter of a mile long. Knowing how close the finish was and that I no longer had to fight the wind, I found another gear that I didn't realize I had and gunned it. After Hains Point, I had been on track to log a 7:25 mile and I knew I could sprint up that hill and make up some time. Amazingly, I had a burst of energy and average a 7:21 pace for that final mile.

After the Race
Due to my final kick, the first few minutes post-race were pretty brutal. I felt nauseous and totally knocked out. I caught up with Greg, who ran a 1:07:51. He's gotten so fast recently! And he was waiting with our friends Hannah and Alex. We met up with some other runners from the =PR= racing team and everyone seemed to have had really amazing races.

I had tossed my hand-warmers so my hands were quickly starting to get cold, so we hurried to the mug-retrieval area and I claimed my prize. On the walk back to our hotel, a random women asked if she could take a video of us talking about what we liked about the race. For me, it was the mug! Oh, and I guess the cherry blossoms, too. Greg and I then walked back to our hotel, showered, and had a nice brunch. I actually brought my mug to brunch and drank coffee out of it!

Now, time for some stats.

Overall, I'm pleased with my performance. I did the best with what I had. Even though I kind of fell apart during the last two miles, it wasn't because I slacked. I think it was partially due to the wind, but primarily due to me just not feeling 100% for whatever reason. I honestly thought that sub-70:00 official would be well within my grasp, and I expected to be able to run about 8-9 seconds per mile faster. Stated differently, I didn't expect that I would blow up at the end given my paces for miles 1-8. Part of me wants to run the GW Parkway Classic 10-miler in three weeks for another shot. But at this point, I think I will just wait for the Army 10-miler in the fall. Which can be warm-- but I guess I will be acclimated and hopefully fitter!

The good news is that I ran a huge PR, shaving 30 seconds per mile off of my average pace. The PR cake will taste great this evening. I felt fast with my super-low bib, too! And I actually DID run 10 miles at a sub-7:00 pace, it just wasn't official. Or at least Strava thinks I did! And best of all, had this been 1973, I would have won the race outright. 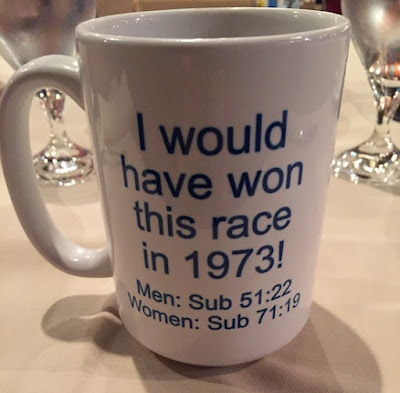 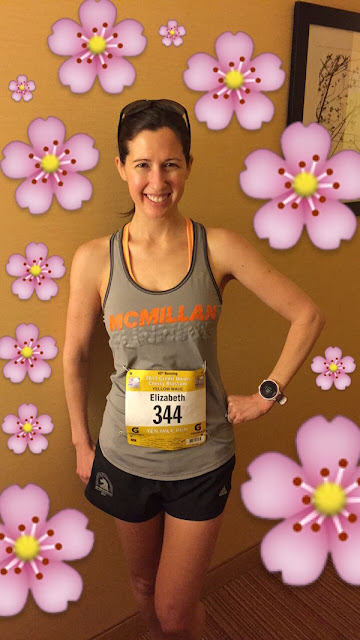