This morning I ran the GW Parkway Classic 5K. I had only run this race once in the past back in 2008, when I ran a 23:58. This race also offers a 10-mile race (which is what the event is known for) and I had run that three times, although two of them had been marathon-pace training runs. The 5K is
the last 5K of the 10-mile course, which runs along the scenic Potomac River.

The GW Parkway Classic is a point-to-point course. Shuttle busses drop runners off at the start line and they run back to the finish line in Old Town, Alexandria. The last bus leaves at 7:00, and the race starts at 8:00. Greg and I didn't think it made sense to arrive at the race an hour an a half before the start and take the bus, so we parked about 2 miles away from the start and simply ran our warmup to the start.

Let me back up a bit.

Last Friday, I ran the Crystal City 5K Friday, in a time of 20:44. It was an evening race and I felt remarkably fast and strong for a warm (70-degree) race that was held at a time when I am usually getting ready for bed! My Garmin clocked an average pace of 6:34 for 3.16 miles, which yielded an official time of 20:44. This was a six-second PR.

I figured that the GW Parkway course, which only has two turns, would be much faster, simply because I wouldn't lose momentum with so many turns and I'd be able to run the tangents, for a Garmin distance of closer to 3.1 miles. Not to mention, the weather was forecast to be much cooler (49 degrees at the start). I figured with all of this in my favor, I would be able to take at least 10 seconds off of my official time; probably even more.

My week of training in between the two races looked like this:

Wednesday: 2 miles at "steady state" and 1 mile hard. The company I worked for hosted a 5K race at
its annual conference, which just happened to be occurring a few miles from the GW Parkway Classic finish area. I didn't want to race it at full effort, given the 5K from the previous Friday and the 5K on the upcoming Sunday. My splits were 7:16, 7:15, 6:43.  Including warm up and cool down, I ran 5.8 miles.

Thursday: 7.5 miles easy @ 8:21 avg. I was still at the conference, so I had the opportunity to run across the Wilson Bridge, which connects Maryland (where the conference was) to Virginia (where the GW Parkway Race is). I scoped out the course on the Virginia side and figured out where we could park. This was a beautiful run, and it made me think that I should do my long runs in more scenic locations instead of my local neighborhood routes.

Friday and Saturday were both easy low-mileage days, and I felt strong and ready for the GW Parkway race.

Before the Race
Greg and I ran to the start line, and much to Greg's dismay, the porta potty line was extremely long. I, thankfully, did not need to use one, so I continued my warm up. About ten minutes later I found Greg still in line! And he had quite a few people in front of him. There were only 5 porta potties and this race had over 1,300 runners. Definitely not enough, especially since most runners arrived at the start line over an hour in advance.

It was getting late, and Greg wanted to stay in line and wait, so I made my way alone to the start line. Annoyingly, there was a group of about 5-10 children, who looked to be about six years old at the very front. They had an adult with them and the adult was telling them not to line up in the first row, but it was okay for them to be in the second row. I knew they would go out blazing fast and then I'd have to weave my way around them during the first quarter of a mile. With two minutes to go, there was still no sign of Greg. But finally he appeared, with only about 30 seconds to spare.

Mile 1: 6:35
My plan was to run the first mile at 6:31-6:32. The first mile is flat, and I wanted to run my goal pace for the first mile. Much to my surprise, the pace on my Garmin did not match my effort level. I thought I was running really hard, and for most of the mile, I was barely below 6:40. But, I didn't
judge it, and I didn't do anything foolish like try and surge that early. The race started going south on the parkway, and after a quarter of a mile, we turned around and ran north. We would run north for the remainder of the race, and I'm not sure what the reason was for the turnaround at the start. I noticed there were about 5-6 women ahead of me. I passed the first one about half a mile in, and I passed the second one at the first mile marker. Greg was not very far ahead of me. Typically he goes out really fast in 5Ks and I can't even see him; that's how it was in Crystal City. But I figured I was in good shape if I was only running about 4-5 seconds behind him.

I had to keep reminding myself not to adjust my shorts, which kept riding up. I had fallen in love with a pair of Nike Pro shorts because they matched my McMillan racing gear so perfectly. But they were not comfortable, and probably looked more like briefs by the end of the race. I kept wanting to adjust them throughout the race, but I knew that would take energy away from running so I resisted the urge.

Mile 2: 6:42
This mile was really tough. There was a hill (which didn't look that long or steep) but I really slowed down on it. I think the issue was the headwind. Based on the Crystal City race, I really thought I should have been able to run faster, but I couldn't. I was working really, really hard and I felt pretty good; but my pace simply wasn't as fast as I expected. Most of this mile actually hovered around 6:50 until the downhill, when I really surged and passed a guy, and brought my average pace down significantly.

Mile 3: 6:35
This mile started up a hill that was steeper than the previous one, but shorter. I worked my way up the hill and couldn't even bring myself to look at the pace on my Garmin. We turned a corner and the rest of the mile was one long straightaway to the finish line, on a road offered a slight decline. One of my colleagues who lives in Alexandria was cheering for me shortly after the turn. I knew to expect her 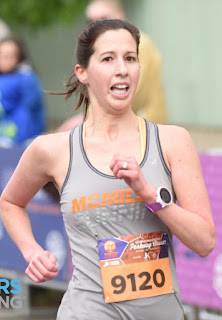 and it gave me a burst of energy to hear her call my name. I was hurting pretty badly by this point and I wondered how I would ever make it to the finish line without slowing down. I noticed that Greg had widened the gap substantially. He was going for sub-20:00 and I wondered if he would make it.

I really liked this part of the course because it was mainly flat with a slight decline, and it was really wide with plenty of space to run. But the headwind made it challenging. I can't complain too much about it because it was 10 mph, which is not that strong, and the overall weather was fantastic. But, it definitely made that last mile (and actually the whole race) more challenging than anticipated. I was running slower than I had hoped for, but I was still motivated to get a PR because I knew this course would end up being "shorter" than the one from last Friday.

As I approached the finish line, I was able to slightly increase my speed, and I approached a woman who I had in my sights for the entire race. I was really closing the gap on her, and when I passed the mile 3 mark, I really surged to try and pass her.

The last 0.12: 6:11 pace
She noticed me, though, and she pushed harder and ended up beating me by two seconds. After the race, she thanked me for showing up because she said it motivated her to push even harder. She motivated me to push as well, so it was mutual!

My official time was 20:38, which is a PR by six seconds! Interestingly, the Crystal City 5K was also a six-second PR from my previous time of 20:50. So in the last 9 days, I have shaved 12 seconds off of my 5K PR. This also means that I have set THREE PRs in the month of April: one at the Cherry Blossom 10-miler, one at the Crystal City 5K, and another one today.

After the Race
I found Greg and he told me he ran a 20:02. This was a PR for him by seven seconds, although it wasn't the sub-20:00 he had hoped for. We walked around looking for race results to see where we ranked. I thought I was either the 4th or 5th woman overall. We couldn't find results posted anywhere, so we ran about a mile to where my friend/colleague had been cheering-- which was right in front of her house. She had fresh muffins in the oven and offered us fruit, waffles and coffee. Before indulging, we checked the results on her computer (we don't run with our phones) and as it turned out, I was the first woman in my age group, and 4th overall female finisher out of 870.

So back we ran to the finish line area. We asked when and where the 5K awards would be, and they told us they weren't going to happen for another hour, and that my prize would be a medal. I didn't really want to wait that long, and I decided I would much rather go back to my friend's house and relax. I later learned I can pick up my medal at the running store in Alexandria.

Final Thoughts and Takeaways
One thing that I learned in sports psychology is that it's useful to look at both metrics: official race pace and Garmin pace. The difference between these two is the inability to run perfect tangents, or running a course that is not USATF certified.

Arguably, the Garmin pace is more important. Why? Unless you're a professional athlete, your race time actually doesn't matter. It's important because it shows your personal achievement. But in that case, wouldn't a more accurate measure of personal achievement be to use the same timing system/device across all runs?  I'm sure many runners would disagree with me, especially in this day and age of social media where you don't want to be accused of inaccurately representing your ability. Official is official is official.

I can say with complete confidence that I ran the Crystal City 5K faster than I ran this race, even though my official time says otherwise. I am actually more pleased with my performance last week than with my performance this morning. I think that the course from last week was harder, and I ran it faster. But does that mean I can't celebrate my new official PR? Nope! 20:38 it is, and I'll be having PR cake this evening with a time of 20:38. (Come back later for photos).

I'm looking forward to hitting the track pretty hard over the next few weeks so that I can try and chip away even more at my 5K pace. I'd love to be able to run a 20:17 at some point in 2017. Probably in the fall, but I'll try my best over the summer.