Running after Mono: Comeback in Review

I like to review things. I like to review my individual races, workouts, training weeks, training cycles,
and years. It helps me gain closure and ensure that I've taken everything I need from the experience,
whether that's learning, celebration, or analysis.

I wrote a review of my 12-week layoff with mono, detailing the timeline (June 30-September 20) and how I handled the situation. I've had mono three times as an adult, and if I ever have it again, I will be even better prepared to handle it, both physically and mentally. But now onto the fun part-- how I made my comeback and was able to PR the 5K just 2 months after starting to run again.

For anyone who is coming off of an injury or illness, my best advice is not to rush it, no matter how tempting it may be. Taking it slow in the short term will really pay off later down the road. It does not take long to rebuild your fitness. You have a baseline level of fitness that your body will naturally return to once you have some solid training weeks behind you. Always try to train at one step behind your fitness level, not one step ahead of it. What I mean by that is-- when you finish a run, you should always feel like you could have pushed a little harder, run one extra rep, gone a little longer. Always leave a little bit out there, and that applies for most workouts (not races).  As Greg McMillan says- don't chase fitness; let it come to you.

Here's a snapshot of my comeback: 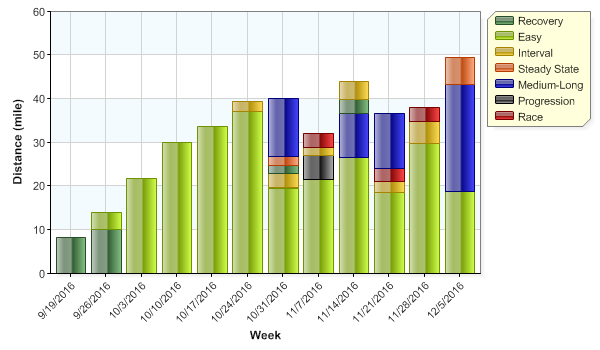 The first five weeks consisted solely of easy running. This was the toughest part. I grew bored of easy runs and longed for some variety. That said, my paces for these runs dropped significantly each week, without upping the effort level. By the time I ran my first race on November 13, I had regained a good deal of my speed, much to my surprise. My goal for that Veteran's Day 5K was to run 22:30 or lower, and I ended up running 21:31.

My endurance wasn't in as good of a spot. I paced a new friend to run a 1:58 at the Indianapolis half marathon, and my legs were pretty beat up the following day, even though the pace felt easy from a cardio perspective.

Mentally, the first seven weeks were the hardest. I didn't really know how much fitness I had lost or regained, and seemingly everyone around me was PRing at their fall races. I had to constantly remind myself that I would be setting PRs myself soon enough-- I just had to be patient and trust my coach's training plan.

Once I got over the hump and was able to begin racing and running faster workouts, I felt like my good ol' self again. I even had the confidence that I could set a PR in the 5K distance, which I did at the Virginia Run Turkey Trot by running a 20:50. Granted, it was only a one-second PR, but it meant that I was back in business from a speed perspective. I followed that up with a 20:58 at another 5K just 10 days later, winning my age group.


Up Next: Marathon Training
I am now officially training for the Myrtle Beach Marathon on March 4th. I chose this marathon because I wanted to also run the Cherry Blossom 10-miler, which takes place the first weekend in April. I definitely didn't want to wait until after Cherry Blossom to run a marathon due to the potential for warmer weather, so Myrtle Beach fell on a good date. The only downside is that it will be a 7-hour drive (with no direct flight options) but it has a great reputation and it's supposed to be a 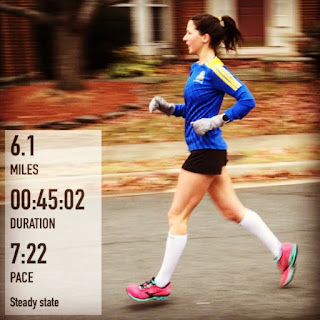 fast course. I've heard that it can be windy, but I've been known to set major PRs in windy conditions, so long as I have a strategy for managing it.

After today's 30-minute run, which I haven't done yet, I will have logged a 52-mile week. I'm now running 7 days a week. My current streak, which started on December 1st, has lasted 10 days so far, which contains 70.7 miles.

On Tuesday, I completed a 90-minute run, with the last 15 minutes "hard." I ran the last two miles in 7:08, 6:48. On Thursday, I ran for 75 minutes, with the middle 45 minutes at steady state pace. Steady state is somewhere between half marathon pace and marathon pace. I surprised myself by averaging 7:22 for 6.1 miles. Everything felt really good. My long run for the week, which I ran yesterday, was two hours, which equated to 13.9 miles at a pace of 8:38.

I'm hoping that I continue to be healthy for the remainder of the training cycle and that the winter weather doesn't throw too many curve balls. I know I will need to be creative about moving workouts around depending on snow and ice.

Overall, I'm extremely thankful that I'm healthy and that I've come back so strong, and that the whole mono incident is far behind me.
at 7:38 AM