This morning I ran the Run With Santa 5K. I typically don't run so many 5Ks back to back, but I needed to squeeze in three "ranked" races before the end of the year. Previously, I ran the Veteran's Day 5K on November 13 (21:31), and the Virginia Run Turkey Trot on Thanksgiving (20:50). I am 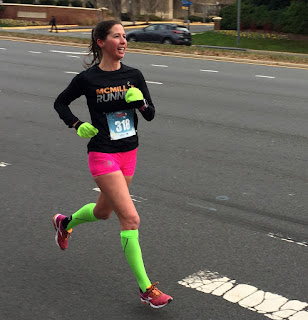 The rest of the week was all easy running. Typically I do a tune-up workout the Thursday before a Sunday race, but for whatever reason, that was not on the schedule this week. I didn't question it and just ran easy until today's race.

Before the Race
I must have gone back and forth a hundred times trying to figure out what to wear. I originally had planned to wear CW-X compression capri tights, but yesterday I noticed a slight ache in my shin. Given my history of stress fractures in my shins, I thought it would be best to wear compression socks to this race instead of capri tights, which only come down to my knees. I'm not terribly worried about this ache because it is extremely minor. But the location has put me on guard.

With 34 degree temps (and an overcast sky) I knew a long-sleeve shirt would be in order with shorts. There was no wind, so conditions were ideal. I've generally lucked out with the weather for all three of my 5Ks this fall.

At 7:45, I drank my UCAN and I was ready to warm up at 8:00 with my friend Hannah for an 8:30 race start. I really like warming up with other people because it gets me out of my head so I am less antsy about the race. Greg had decided to rest on his laurels with his 44-second PR from Thanksgiving, so he was on cheer squad duty. My step mother also came out to watch, which was awesome. My friend Alison was also there spectating, so it was great to have a full support crew.

I gave my warmup pants to Greg a few minutes before the race started and lined up close to the front with my friends Lisa and Hannah. My main goal for this race was to stay strong during the last mile. The last mile of this race is killer- it's uphill and it's so hard to push when you're spent from the first two miles. Given that this course is more challenging than the Turkey Trot, I did not expect to PR. Although I didn't rule it out either. I really wanted to go sub-21:00, which would put me within 10 seconds of my PR.

I've run this course 4 times in the past as the "Firecracker 5K" in the summer. I've never run it under cool conditions so I was curious to see what it would be like to not be dying of heat exhaustion.

Mile 1: 6:42
I focused on staying strong but relaxed during this mile. It's a net uphill which is good because you
don't get pulled out too fast. But it also means you are working hard right from the start. I was very focused on running the tangents because my Garmin typically measures this course at 3.16, and I thought I could get that down if I ran the tangents.

Mile 2: 6:23
My favorite mile. All downhill! My plan had been to really use the downhill nature of this mile to bank some serious time, and I did that. I saw my step mother and Greg during the beginning of this mile, and that pepped me up. I also found myself running with Lisa for the first half of this mile. She was amazing. She kept cheering for me and encouraging me. I'm not able to talk during 5Ks so I was not able to return the favor! I surged ahead about halfway through and she yelled at me to go get a PR. At this point, I thought a PR was definitely possible. I just had to hold it together during the last mile. I'll also note that this is my fastest ever mile! I've never raced the mile, so this is my fastest ever recorded time for a single mile.

Mile 3: 6:58
Given how much effort I pumped out here, I was surprised to see how much I had slowed down. The hill isn't particularly steep but it's so long. Pretty much starting at 2.5 and going to 3.1 it's all uphill and some parts are steeper than others. I continued to focus on the tangents and I told myself that I could do anything for seven minutes. I gave it all I had, but clearly I was slowing down. Nevertheless, I was able to pass two women, and nobody passed me.

Last 0.14: 6:22 pace
That last bit of this course continues to be up an incline. As I approached the finish line, I could see the clock tick closer and closer to 21 so I gave it everything I had. I was able to squeak under in 20:58. Goal attained!

After the race, I re-united with Greg, Alison, my step mom, Hannah and Lisa. I started my cool down and ran into my friend Cheryl so we were able to cool down together. I also really enjoy cooling down with other runners because I find cool down runs to be extremely boring and it's nice to be able to talk about the race with someone.

Final Thoughts
I was pleased with my performance this morning. I would have liked to have run that last mile a bit faster and set a new 5K PR, but I just wasn't able to give any more than I gave. I do think that running a 20:58 on this course is more impressive than running a 20:50 on the Turkey Trot course, but that's just my opinion. Some people love this course (like my friend Hannah who set a PR by over 30 seconds and broke 19 minutes) and Lisa. Others find it extremely challenging. I'm somewhere in the middle- I think it's a tough course, but not as tough as the Veteran's Day one. It really requires that you push hard through the end and if you went out too fast then that will be difficult to do. Overall, I just had a really fun time. Lots of my friends were there and it was awesome that my step mother came out too. I also enjoyed donning my brightly colored outfit.

I'm not sure when my next 5K will be, as I am now officially starting to train for my next marathon. Greg and I have a tradition of always running the Ringing In Hope 10K/5K on New Year's eve, but that's the weekend before the Disney World half, so I am not sure if I can squeeze in a 5K while also running high mileage. Another interesting tidbit is that Strava tells me I ran portions of this course faster in the summer of 2015, when I ran a 22:05. I must have started more conservatively back then and had more in me for that final mile.

Finally, the shin behaved itself and I didn't feel it at all during the race or afterward. Phew. I'll continue to monitor it because I would hate to get an injury so soon after coming back from mono.

Oh, and public service announcement: if you are looking for a holiday gift for a runner, check out my book Boston Bound. It's appropriate for runners of all abilities, and addresses the mental aspects of running. 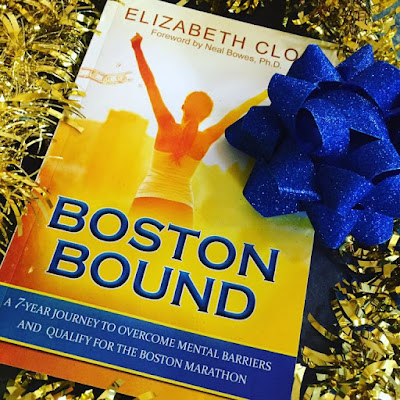