One of the topics that I cover in depth in my book is making comparisons to other people. Little good 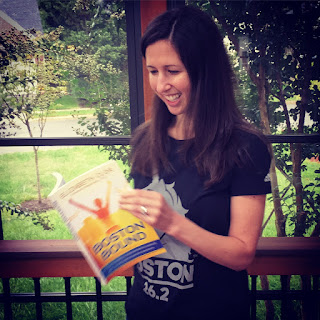 comes of comparing yourself to other people, and yet, it's part of human nature to do so. We all want to know how we stack up, and we tend to use other people to gage our own successes. With the rise of social media over the past 10 years, it's almost impossible to avoid these comparisons. There have been many articles written about how Facebook can cause depression-- when everyone else seems to have things that you don't.

When it comes to running, falling into the comparison trap is all too easy. We talk about our paces, the length of our runs, how many miles we trained, etc. There are so many numbers and data points that comparison just feels natural. If you're a perfectionist, then you'll likely look to find fault with your own running (potentially without realizing it) and noticing how someone else raced or trained compared to you just feeds into this counterproductive mindset.

It's difficult to not make these comparisons, especially if you are active on social media and have friends who run. My best advice for not doing it is to simply realize that focusing on other people will not help you with your own running. It could actually hurt your running if it results in you feeling like you have to run as fast as someone else. Then, you'll be putting additional pressure on yourself, which is not conducive to a strong performance. The best way to be successful is to simply focus on yourself and your own progress, independent of what others are doing.

Why am I talking about this now? At the Army Ten-miler last weekend, where I went to cheer on Greg and my friends, I found it difficult to not fall into the comparison trap: "Everyone else is running fast times and I can't even run 10 miles right now." When I registered for this race last spring, my goal was to run it at a sub-7:00 pace. But if you've been following this blog, you know that I spent the entire summer being sick and unable to train. Everyone who I went out to cheer for ran really well, and Greg broke 70 minutes with an average pace of 6:58.

My focus for the entire day was supporting Greg and my friends, but as the day progressed, I started to feel a sense of loss. I was perfectly fine the day before the race when we picked up Greg's packet, and even during the race when I was watching all the runners go by. But once the race was over and everyone started talking about their races, I felt a little sad. I didn't want to rain on anyone's parade so I did a good job of ignoring my feelings and focusing on being there for my friends. And yet, I still had a nagging feeling that I had missed out.

Later that evening, after all the celebrations were done, I started to reflect on my feelings. I was sad. It was hard to see everyone else have a great race when I was unable to run, and wouldn't be able to run the Army Ten-miler for another year. I then began to judge myself for falling into the comparison trap. For allowing other people's accomplishments to diminish my own. After all, I was recovering well, feeling healthy, and I had just run five miles the day before. So why was I back to my old ways of comparing myself to other people?

But then I realized something. I actually had not fallen into the comparison trap. Even though watching other people run this race really well (especially Greg, who ran the time that I had hoped to run) made me feel sad about my situation, I wasn't really comparing myself to them. Instead, I felt lonely. Lonely because everyone else was talking about their races, and I didn't have a story to share. Lonely because everyone else was talking about the upcoming Indianapolis marathon, which I wouldn't be running. Lonely because I was surrounded by my running friends and my husband, but not having a shared experience.

Countless runners have reached out to me to thank me for writing my book. Often, they tell me that they felt like they were reading their own story, and it was good to know that someone else out there experienced the same thing. It seems that readers are connecting with the book on an emotional level because it makes them feel less "lonely" for having feeling of disappointment, loss, injustice, and a slew of other negative emotions. They've thanked me for being so open and honest about my feelings. In a world dominated by social media where people typically only talk about their successes, it can feel lonely if you perceive yourself to be the only person who didn't set a PR or who didn't have a good race.

If you're trying to work on your mental toughness by steering yourself away from making comparisons to other people, then it's good to be aware of this loneliness component. You can be doing a great job of not comparing yourself to other people while still feeling disappointed, sad, or lonely about your own situation. It's important to separate the two. In my case, I have to be realistic in knowing that I am going to be a little sad about missing out on these fall races. It's harder to ignore those feelings when I'm actually attending the races and supporting my friends and my husband. But, overall, I'm in a great spot mentally and I am truly happy to see other people succeed. Especially Greg, who I have been coaching. The goal with mental toughness isn't to never feel sad or upset. The goal is to not dwell on those feelings and have them interfere with your overall state of being.

So when you feel like everyone else is. . . then, ask yourself if you are comparing yourself and your worth to those people (the comparison trap) or if you are lonely because you feel like you are the only one who feels a certain way. If you are lonely, then remember that you're actually not alone and that many other runners get down about their running from time to time. They just don't post about it on Facebook, usually, or even talk about it.
at 10:53 AM