Easing Back Into It

Since recovering from mono (or some mono-like virus that took me out for 12 weeks), I've now been running for just over four weeks. My coach determined it was best to re-build my aerobic base before working on speed, so easy running has been the name of the game. 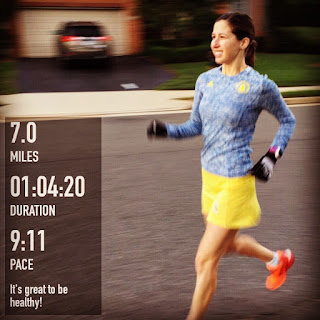 While I'm extremely grateful to be running healthy again, I'm dreadfully bored. Usually I enjoy my easy runs because they are balanced out by harder runs. Variety is the spice of life! But for the past four weeks, my patience has truly been challenged and I have a strong desire to run fast. I've occasionally done very short (12-second) strides at the end of my runs, but those have done little to quench my thirst to push myself.

Meanwhile, I made an attempt to plan out my spring racing schedule. I chose a few target marathons and passed my ideas on to my coach. The thought of having a plan and a target race really energized me, but my coach warned that we should still be taking things one week at a time, and not making any decisions now on when to run a marathon. UGH. In an ideal world, I would run a marathon in early February, and then have all of March and April to run shorter distances, including the Cherry Blossom 10-miler. And if I didn't BQ at the marathon, I would have another shot in early May. But my coach thinks that early February could be too soon, so he doesn't want to make any decisions yet. I trust my coach whole-heartedly and I wouldn't want to run a marathon that I wasn't ready for, so if I have to wait until March, I will.

My overall feeling is that I'm like a caged tiger. I want to plan my spring racing schedule. I want to do speed work. I want to run a race. I want to have some gage of where my fitness is. But instead, it's just easy running. Every. Single. Day. 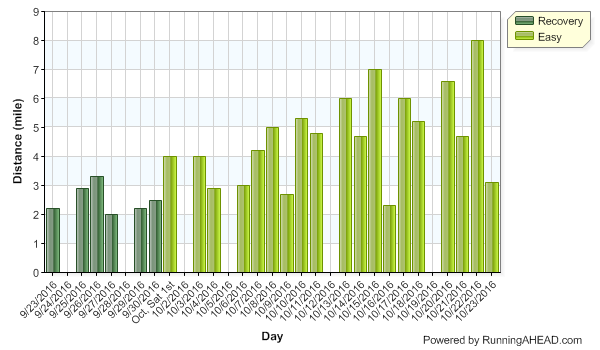 Here is a recap of the details. Even though there is no variety in the runs, it's nice to see my easy pace getting faster and my distance increasing.

Overall, last week went really smoothly. The weather was perfect every single day: in the 40s with no rain or wind. October is my favorite month of the year for running, and I savored every moment. I played around with the strides a little. I sometimes would use them to run a controlled even effort, at around 5K effort. And I used some of them more like traditional strides where you progress to a sprint.

On Thursday, the plan called for "60 minutes with the last 10 minutes harder." Because this was the only hint of speed on my 4-week plan (aside from strides) I had been looking forward to it for weeks. But as luck would have it, Thursday was also the hottest day of the month! It was 70 degrees and humid, which slowed my easy pace to 9:25, and my "harder" pace was around 8:00.  My average pace for the run didn't end up being faster than usual, but at least I had 10 minutes of "harder" effort, where I got to push a little more. I wish I could say that it felt great, but it doesn't feel great to push hard in the heat and humidity if you aren't acclimated.

Saturday's 8-mile run was ridiculously windy. Ever since I mastered the wind during the Shamrock Half Marathon last spring, though, I have noticed that even 20 mph sustained winds doesn't affect my pace all that much. Wind used to be a huge obstacle for me, but once I changed my mindset about it, then I realized that my speed doesn't have to be affected to such a great extent. Overall, I was pleased that I was able to run 8 miles at pace of 9:05 in the wind and have it feel easy. That's good progress for less than 5 weeks of running.

This morning, one of my friends was hosting a 5K at the elementary school she teaches at. Since I had 20-30 minutes on the schedule, I figured I would go support her and do it as a training run. Greg came we me and we ran slightly faster than "easy" pace at 8:35, finishing the race in 26:36. I later learned that this time won me third place in my age group, and 7th overall female! It was a small race.

I still have a long way to go to get back to where I was before I came down with mono. The below chart shows my running year-to-date. You can see the ill-fated attempts I made in August to start running again! 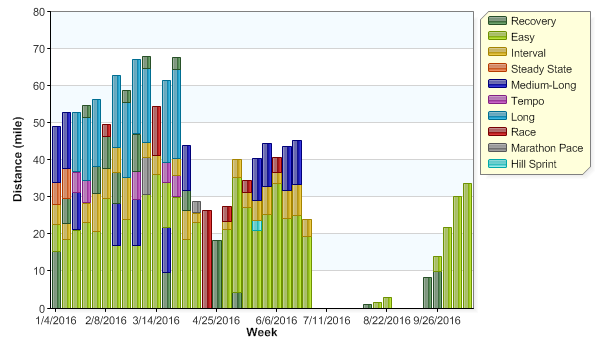 It's not easy being green, and I am hoping to add more "color" to my runs during the next few weeks. Overall, I am happy with my progress and thrilled to be healthy, and I know that variety and speed will eventually become part of my weekly schedule.