In case I haven't said it enough, I am so elated to be running the Boston Marathon. It's been a dream of mine for 8 years and it's finally coming true. I've worked hard for so long and struggled so much to get here. And finally it's all paid off!

Here's a snapshot of my training cycle.

This is far more intense than anything I've done in the past, and anything I ever thought I was capable of. I ran 278 miles in March, with only one day of rest. Nearly all of my training runs have felt energized, and I haven't felt any hints of injury.

Coming off of my high from the Shamrock Half Marathon two weeks ago, I knew I still had some intense training ahead of me. I recovered very quickly from the race and ran 61.4 miles the following week.

Super Long Runs
The following Saturday (3 weeks out from the race) I ran 22 miles on the W&OD trail. Greg dropped me off in Ashburn and I ran 22 miles all the way to Arlington, where my mother was waiting for me. She even snapped a photo of me from her iPad! This was great preparation for Boston for several reasons.

First, I started shortly after 10:30am, to simulate the Boston start time. This was my third training run that I started late to practice the timing of the nutrition. Second, it was a fast-finish long run with the last three miles "hard." My last three miles averaged a 7:22 pace, and it was nice to be able to do that at the end of a long run, particularly one that was sunny and starting to get warm. Third, a good portion of the run was uphill, from miles 13 through 19. I thoroughly enjoyed this long run. I had always wanted to run a very long distance point-to-point on this trail and I finally did it.

Shortly after running the 22-miler, I received my training plan from my coach for the remaining weeks. Much to my surprise, he prescribed a 24-miler the following weekend! I had never run 24 miles in training before, and I had never run longer than 18 miles two weeks out from a marathon. But given how good I felt on the 22-miler, I thought that I could manage 24 without needing too much recovery. 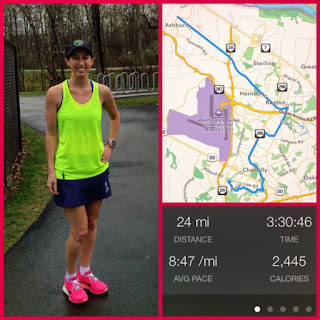 So yesterday, Greg once again drove me out to the W&OD trail in Ashburn. But this time, instead of running all the way on the trail into Arlington, I ran to my house. This meant I only ran 11 miles on the trail, and then I spent 13 miles on other roads to get back home.

The run went well. There was no "fast-finish" so I focused on keeping my heart rate in the aerobic zone the entire time. Miles 5-11 were a steady uphill climb, but once I got off the trail, the hills were more rolling. It was mentally helpful to have different segments: the trail, the Reston Parkway, the Fairfax County Parkway, and then the neighborhood roads near my house.

I ended up running the 24 miles in 3:30:46, which is an average pace of 8:47. And I managed to keep my heart rate in the aerobic zone for the first 21 miles. This was great practice for Boston because I will be out on the course for about the same amount of time (hopefully a bit less) so now I know I can be on my feet that long and stay strong and energized. I had a rough patch at around miles 17-18, but I got over that and felt really strong all the way through mile 24.

Today, my legs feel pretty good! I did a short recovery run, giving me 67.7 miles for the week. I've been taking ice baths after all of my long runs, and I think they've really helped. Also, because my weekly mileage is so high, these long runs aren't as much of a strain on me as they used to be. They make up a lower percentage of my overall weekly mileage, so they are more manageable. Finally, I think that running with Generation UCAN has helped keep my energy levels even during these runs and my stomach feeling happy, so I think a good deal of my success has to do with this new fueling system.

Speed Workouts
I've also kept up with my speed work since Shamrock. I did a super-fun "wave tempo" on Tuesday of this week. A wave tempo is based on the premise that running slightly faster than your tempo pace and slightly slower than your tempo pace actually does a better job of increasing your lactate threshold. The workout was 3 times (1 mile at 10K pace, 1 mile at marathon pace). My splits were as follows:

The great thing about this workout was that I felt like I could have kept going. And it tricked my brain into thinking that marathon pace was easy. 7:37 definitely felt easy in comparison to running 6:50. This was a huge confidence booster and I truly believe that when I run Boston, the first 16 miles of downhill at MP will feel relaxed without much of a strain.

I also cranked out some speedy 800's at the track on Thursday of this week in the wind, which once again increased my confidence in my ability to run strong through wind.

I'm Ready!
During the next two weeks, I'll back off the mileage slightly, but my workouts will still be intense. My focus will be:


And I LOVE my bib number. A lot of people don't care about numbers, but I like it when I get a number that is in some way meaningful. Well, the house I grew up had the address of 9448. And ever since then, I've used the number 9448 for various things. Well, lo and behold, my bib number: 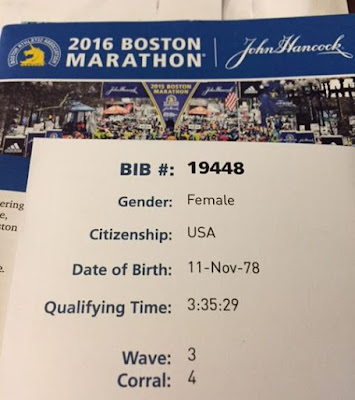 I can't wait. It's crazy to think that I plan to run this race about 10 minutes faster than my qualifying time, so I need to be prepared to do some weaving and passing without expending too much energy on it.

I may blog again before Boston, but if not, you'll hear from me after the race!
at 7:57 AM