Boston on the Brain: Final Thoughts

With just five days until the Boston Marathon, I've been doing some serious reflecting on what got me here.

Some History
I first decided that I wanted to qualify for Boston way back in 2008. I missed my 2008 attempt because I got sick, and then in 2009 I ran a really hot marathon (in which I totally fell apart), followed by one where I ended up with hypothermia. And then I got injured in the fall. In 2010, I had my first DNF at a hot marathon, and the downward spiral continued from there.

In 2012, I was at an all-time low with my thoughts and feelings about running. After multiple 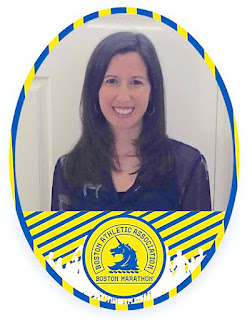 anxiety-induced DNFs, I was at a loss for what to do. I felt like no matter how hard I trained, and no matter how fit I was, I just couldn't run well during a marathon. It seemed like everyone around me was progressing, qualifying for Boston, and PRing left and right. Meanwhile, I was going in the reverse direction and had failed to improve my marathon time over the course of four years.

Say the word "marathon" and my heart rate would increase. The week before a marathon? Forget it! I was a ball of nerves. Restless sleep, obsessing over my time, worrying about every possible thing that could go wrong. I was, of course, trying my best to relax, but my inability to relax just made things worse. The week leading up to a marathon was a downward spiral almost every time. I would get knots in my chest. I would use up all of my energy obsessing over the race beforehand, so there was none left on race day.

I started working with a sports psychologist in May 2012, and something he told me that I always held onto was: "Your time will come." Some days, my self-pity got so bad that I actually had to write that phrase on a post-it note and stick it to my computer monitor at work. Your time will come. I told that to myself over and over again. Particularly when a race didn't go well. Or when other runners posted their PRs on Facebook. I should have been happy for them, but I all felt was bitterness and frustration.

My time is now here. It won't last forever, I know that. But it's here now. I'm totally at peace with myself and my running. I've been setting PRs left and right over the past year. I get to run the Boston Marathon on Monday. Yes, it's here.

But it didn't magically appear. I had to work for it. And even though I have been training really hard, the hardest work was changing my mindset. Essentially, I had created numerous mental obstacles for myself over the years (some that go way back before I even started running) that I didn't even perceive as obstacles. I thought they were simply truths. Facts. Things that were part of me and my life. I was a perfectionist and if something didn't go perfectly, I didn't cope with it well.

Once I was able to identify all of the mental roadblocks I had created for myself, I was gradually able to remove them. It involved constantly challenging my thinking and refusing to give into negative thought patterns that were so familiar to me. I've been working with an amazing coach over the past two years, but his guidance wouldn't have gone very far if I wasn't in the right place mentally.

It's HERE!
Focusing on the present, which is SO exciting, I have some final thoughts leading into Boston. Ultimately, I view this weekend as an experience. One that starts when I arrive in Boston on Friday evening, and ends when I leave on Tuesday. The race is just part of the overall experience. For years, I have seen Facebook posts about this weekend. People taking photos near the finish line, wearing their jackets around town, getting their bib numbers. I get to do all of those things!  I can't wait to get my picture taken near the finish line. I can't wait to stroll the streets of Boston in my jacket! I can't wait to get my medal and get my post-race photo taken. I also get to meet my coach in person for the first time! Greg's running the B.A.A. 5K. I'm meeting up with people I've been communicating online with for 5+ years and have never met.

Now, about that 26.2-mile journey from Hopkinton to Boston. I want to savor every moment of this, and keep my mind focused on the experience! If I can keep my head in a good place, it will help me overcome the inevitable challenge of the Newton hills, and the suckiness of the weather. Yup, I'm pretty sure the weather will suck, but I've accepted it. Of course, I would LOVE for the forecast to change between now and Monday and there's a chance a cold front could push through earlier than expected. But if not, I'll adjust my goal and be satisfied with the fact that I gave it all I had.

The heat has always been a physical and mental challenge for me. So this year, it's just going to be a physical one. Mentally, I'm ready. Bring on those 67-degree temps. I might be slower than my original goal, but I will arrive to Boston with a smile on my face. The good news is that I really think I am "in shape" for a 3:20, so even a 15-minute slow down will re-qualify me. But even if I don't re-qualify, I'm game for another training season in the fall and Boston 2018 will await me. After all I've been through to get here, I am not going to ruin it for myself by being upset over something I can't control.

In terms of my final training, all has gone well. I have some lingering soreness in my left IT band, but I am foam rolling it twice each day and it's gradually improving. On Saturday, I ran 12 miles with the last 6 at marathon pace. It was in the upper 30's, and I was really pleased to see that my heart rate was in the aerobic zone (144-159) in the beginning and squarely at the bottom of my marathon pace zone for the rest of it: 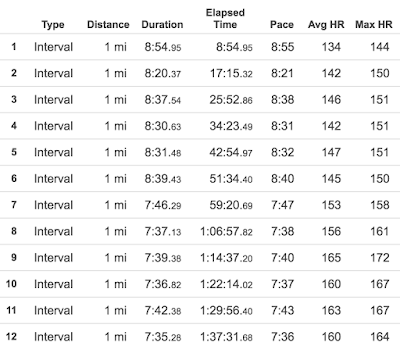 Another thing I used to always worry about was how other people would perceive me. I was afraid to run a slow race time and have people think that I wasn't a good runner. All that's changed. I'm running this race for myself and for no one else. I have my Facebook status updating automatically with my split times, and even if they aren't as fast as I would like, that's fine. Shit, it's Boston. It's Boston! 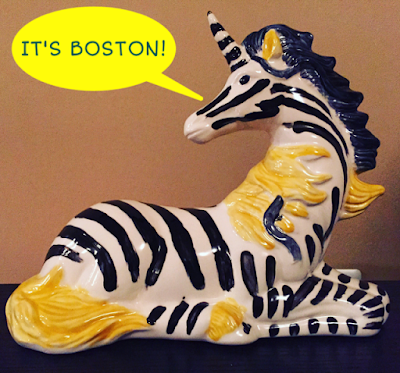 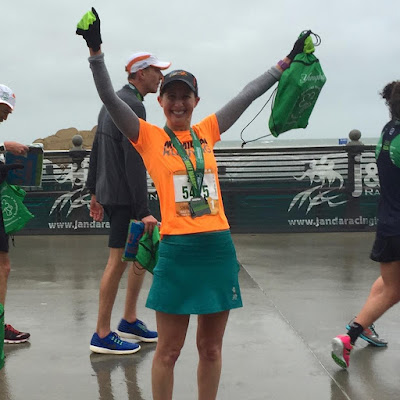